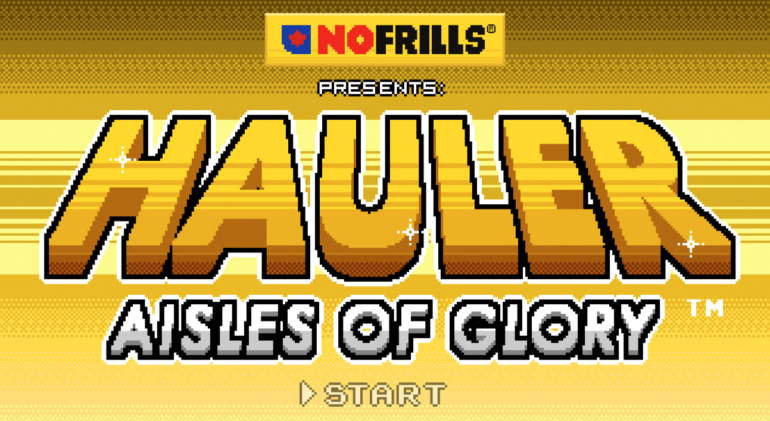 The main screen of the No Frills 8-bit video game Hauler: Aisles of Glory.

Canadian shoppers now have a new way of saving some money, all they need to do is log in and play a web browser game.

Hauler: Aisles of Glory, a retro 8-bit side scrolling animated 2D video game popular in the 1980s, was launched by No Frills May 13 and it can be played on a computer, on a smartphone or on a tablet.

Shoppers can earn 500 President’s Choice Optimum Card points per day — or 50 cents in-store credit — on their Optimum PC card every day after they complete one play through.

The points earned in the game will appear in PC Optimum accounts about two weeks later.

Although No Frills is hosting the online game, the points can be redeemed in many different stores around Ontario like Loblaws, No Frills and Fortinos.

The initiative is part of a bigger “Hauler” campaign, launched on May 6 that includes more community events at local stores, a brand-new commercial, and in-store branded items that will be available to purchase from next month on.

In a May 13 press release, Uwe Stueckmann, senior vice-president of Marketing at Loblaw Companies Limited said the game is designed to let the shoppers train before they go to the No Frills store in preparation for an “epic haul.”

“Every major sport has a video game franchise, why should hauling (shopping) be any different?” he said. 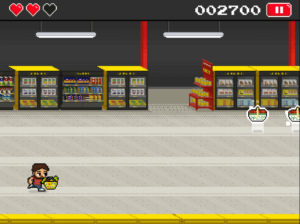 Basic game layout with the character model, lives and total points scored for the current run.

No Frills plans to keep the game online and running until it distributes 50 million PC Optimum points, the groceries giant said in the press release.

If the location service is turned on a mobile device the game will recognize the player’s location and offer a unique version of the 2D animated No Frills store.

The video game has the player controlling one of six different characters or “haulers” who collects food products from an 8-bit recreated No Frills store by moving up and down and jumping while avoiding obstacles or “frills.”

Players will collect different items from many store departments, including bakery, frozen aisles, and household sections.

The final score can be registered onto an online leaderboard at the end of each run.

There are power-ups as well that will give the player an advantage such as an extra life or a magnet temporal effect that will automatically attract items to the character.