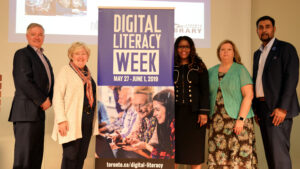 Digital Literacy Week was launched this Monday at the North York Central Library in Toronto.

The Week celebrates the advancement and impact that technology has on everyday life.

Digital Literacy (DL) Week is geared towards appreciating and celebrating technologies that have reshaped the world. 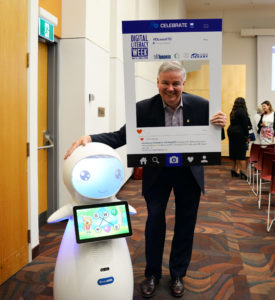 Councillor Paul Ainslie of ward 34, Scarborough-Guildwood said, “You really need to be digitally literate to succeed in everyday life and that’s what we’re promoting here and helping people understand, what digital literacy means and how it impacts our daily lives and how you can succeed.”

Vickery Bowles, City Librarian for Toronto Public Library said, “Well you know in the 20th century the access to information and the pathways to education, they were the great equalizers. But in the 21st century access to technology is just as important. No one can be successful in today’s world without access to technology.”

Involved organizations and Toronto Public Library and its branches will have 250 free digital literacy themed events and workshops for all ages.

The DL week is built on the success of the ‘Digital Literacy Day’, that was celebrated in May 2018. 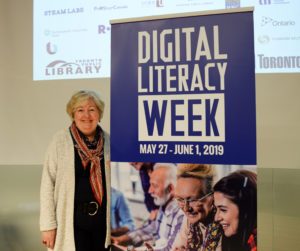 “It started off last year and was endorsed by city council as Digital Literacy Day. And now we’ve expanded into a week,” Ainslie said.

“We’ve got lots of things going on at the library alone, we’ve got over 130 programs and the city has over 250 programs planned for the Digital Literacy Week,” Bowles said.

The events held across the city will showcase digital and technology programs and services available to Torontonians including libraries and schools.

The week will have curated programs and workshops for all age groups – children, teens and adults.

Bowles said that anyone can come and learn things such as coding, artificial intelligence, virtual reality, robotics and other digital skills.

Companies including Cisco, Trinity Square Video, and BMO showcased their technologies in the mini-tech fair at the launch.

David Plant, Executive Director of Trinity Square Video said, “This is an opportunity for us to showcase some of the work that we’re doing.”

Trinity Square Video showcased virtual reality that was easy to use especially for children. The technologies exhibited during this week will focus on making tech available to children and young-adults.

DL week will be hosted across the city from May 27 to June 1.