In recent years, construction and development projects have transformed the Yonge and Bloor area, putting tremendous pressure on small businesses due to rising rent. (Alireza Naraghi)

The Artful Dodger is a typical English pub with high ceilings, framed paintings, and red-brick walls, peppered with wooden tables. It serves everything from classic bar food to salad to beer, all served by a waiter who’s been making a living as a bartender for over 15 years.

It’s a description that could apply to many traditional British and Irish pubs that aren’t popping up anymore.

“Development around this area is like a wildfire. You can see it coming to devour your job, and you can’t do anything about it,” said Mark Collyer, who serves four days a week as a second job at the Artful Dodger.

“I have no problem with economic growth, but this brand of growth is starting to threaten my job,” he said.

Older neighbourhoods in downtown Toronto seem as if they’re being transformed into construction zones — the soaring cranes fill the sky, and the echoing sounds of power and pneumatic tools are always in the background. Rundown Victorian houses built in the early 20th Century are torn down to make way for newer condos and large stores. 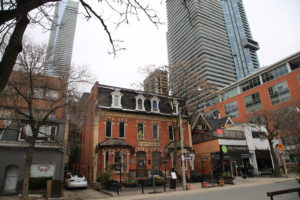 The Artful Dodger, a local Toronto pub near the Yonge and Bloor intersection, established in 1969. (Alireza Naraghi)

The locals gossip about how the area is becoming unrecognizable. For better or worse, the rapid change in these parts of Toronto has become a test: can you gentrify old neighbourhoods without social cleansing?

“I feel I am being shamed or excluded in my own community,” said resident Sarah Boyle. “I have no problem with development. It’s a fact of life. But I have a problem with being left out by the big businesses and getting priced out of my own city.”

As communities transform, prices rise, and neighbourhoods become inaccessible to first-time buyers and low and middle-class families that used to live there.

Toronto’s real estate market ranks as “severely unaffordable,” according to a survey conducted by the Demographia International Housing Affordability.

The government attempted to cool off the housing market with regulations that made it harder to get financing while taxing foreign investors. But that has driven domestic buyers into the rental market, where average monthly rents surged by about 11 per cent.

Neighbourhoods in downtown Toronto are in high demand, said Michel Tam, who runs a small real estate brokerage near Riverdale.

“Anything that’s within walking distance to a subway line is always a magnet in this business,” he said. “Not many people drive to work. So if you can get your hands on a property with proximity to the subway-line — especially in the downtown core — it is a must-have.”

Another area that keeps coming up in conversations is Parkdale. 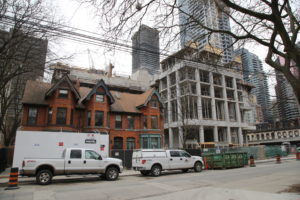 Paul Danin remembers a time when Parkdale wasn’t such a hot ticket. A west-end resident since the 1980s, Danin grew up in Parkdale at a time when most of his neighbours were moving to the suburbs in North York.

He finds the whole process of regeneration “alienating,” but expected.

“I think the majority of people understand that it’s a fact of life, and as long as there’s money to be made, it will continue,” Danin said.

There is also anecdotal evidence local businesses are starting to feel vulnerable.

“The spaces left by the traditional businesses of my area are being increasingly filled by big retail stores, restaurants, trendy art shops, and the ongoing rise of rent,” Matthew Wilkinson, a tattoo artist in west-end Toronto, said.

But the picture is not all bleak.

Indeed, there’s a vibrant anti-gentrification movement in Toronto. Last year, Regent Park activists started to politically agitate for affordable housing and social justice at a rally, and are showing that they’re not likely to be made despondent by the towering condominiums.

Elizabeth Cronyn, an activist who has worked for The Association of Community Organizations for Reform Now (ACORN), said this is a model that only works for people with capital, where they can take advantage of the hot market.

“It’s wrong to think that the market can solve our social problems. You also can’t think that no public money will be required to tackle these issues,” she said.

Cronyn said more people are starting to mobilize in the area — organizations formed around people with a common vision — and she’s hopeful that as more people feel the pinch of rising costs, they would be motivated to join grassroots movements in their local communities to fight back.

“When we put profit over people, it has a huge and catastrophic effect on people’s lives, and if regeneration is going to happen, then we need to make sure that affordable housing is available, and developers are taking responsibility,” she said.

“Transforming communities should be about people who already live there,” she explained pointing to the surroundings. “Otherwise, who are these multimillion development plans are really for?” Cronyn asked.