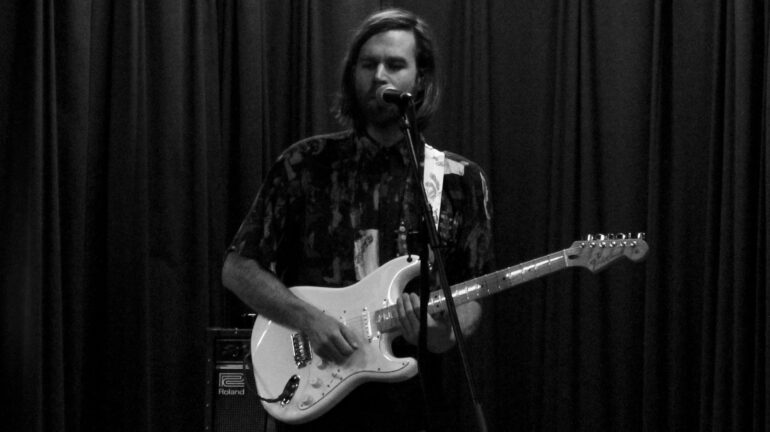 Jason Couse, one half the Canadian band The Darcys, performs in the L Building basement studio for Humber Radio. (Alisha Mughal)

The Darcys are very self-aware and industry savvy.

Jason Couse and Wes Marskell are The Darcys, a Toronto-based art-rock band with impressive hair — facial and of the coiffure variety. They’ve known each other since they were 10 years old.

They were a half-hour late on that Monday afternoon to the basement of L Building — the Humber students responsible for producing the series drank coffee to fill the time.

But when they did show up, they were apologetic, and the air in the room relaxed. The Darcys were here, the work could commence.

And commence it did.

Both Couse and Marskell worked alongside the students to set up their instruments and microphones. At times, it was difficult to find the rock star among the students.

“We’re definitely aware of how lucky we were, and the opportunities we got,” Marskell said of both their upbringings, which were full of music not just in their families but also their public schools.

“Years later, when we were kind of having a go as a band, I remember there was some news cycle — whoever was in power at the time was slashing music funding in Toronto” public schools, Couse said.

This made them consider their fortune in having music at school.

“Not everyone is afforded that sort of luck of the draw,” Marskell said. “We try to give back as much as we can.”

It’s important for them to be using their power and resources for the right thing, he said.

“I think that, hopefully, we’re in a place in our career where we’re not writing ‘bad’ songs,” Marskell said. “And if we’re writing bad songs, then we should probably stop,” he said, and Couse laughed.

“I think we’re still on the upswing of success with the songs, and every song so far has been bigger than the last one, which has been really great,” Marskell said.

“I like to say, if the song doesn’t perform, it just hasn’t found its audience yet,” he said.

“If you don’t have a smash hit,” Couse went on, complementing Marskell’s thoughts, “yes, it might be because the song’s not that good, but [it] also might be because [of] the aesthetic and the tone of your song or the day that it came out.

“There are so many variables, and so many factors,” he said. “So, I don’t ever like to take that as, like, it’s a failure, or we messed up.

“The stars didn’t align on this, and we can do better next time,” Couse said, describing a healthy way to think about a song that does not do well with its audience. Content has an outlet, and you also need to kind of sometimes, if you’re aiming for a certain outlet, cater a thing, to a certain degree, to match that outlet, if that’s your goal.”

“How would you feel about a song if it failed? Would you still like the song if no one else liked it? And if you’re okay with it, then it doesn’t matter,” he said.

They feel that to be a failure means to compromise one’s integrity as an artist — to not stand by the work one creates after it fails, if it happens to fail.

But The Darcys, as they said, are not failing. They are rising.

At the end of the day, they patiently posed for pictures with Humber students and instructors.

After their filming they played three takes of “Chasing the Fall,” each different, each good, and each grander than the one previous.

The Darcys’ latest single, “Hurt,” is available for streaming on Spotify.