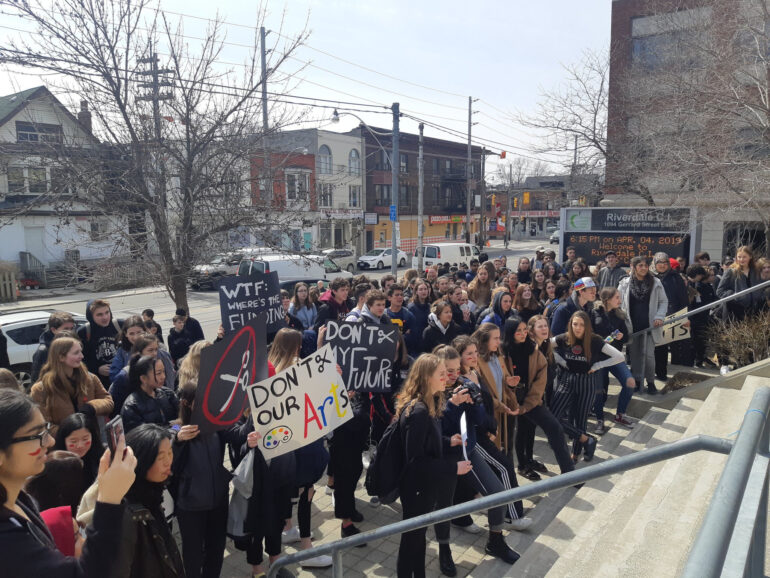 Thousands of concerned students hit the streets today instead their books to protest against the Ford government’s educations cuts.

Students from hundreds  Ontario schools walked out of class this afternoon  to  protest against increased class sizes, fewer teachers, a cellphone ban, and  changes to the sex education policy.

Many Ontario students are not content with the recent government announcements which will fundamentally change many aspects of student life.

The movement Students at @bloorci walled out and joined teenagers from 700 high schools across Ontario protesting changes to education by @OntarioPCParty @fordnation #studentssayno #ONPoli pic.twitter.com/723LRdxefD

Students at Walkerville Collegiate Institute @gecdsbpro have walked out as part of #StudentsSayNo, a province-wide student movement to fight cuts to education.

We’ll have more on this from @cbcmolnar and @JasonViauCBC on CBC Windsor News at 6 p.m. this evening. pic.twitter.com/RZ9Zg7BSva

Students now flooding out of A B Lucas with signs in hand @CTVLondon #StudentsSayNo @CTVLondon pic.twitter.com/8cuGp9HdPH

“I decided to organize my school’s walkout because the changes the government are making will affect my friends and I a lot,” she said, “I am very passionate about getting my degree and making a good career for myself.”

Appleman said that school has been supportive of the protest. She said that she has been in talks with her school’s principal, who responded by setting up a supervision schedule to make sure the walkout was safe.

Lisa Thompson, Ontario’s Minister of Education, described the student protest as a  “union stunt” and said the government would not be distracted by the protests.

Thompson announced an increase to class sizes from 24 to 28 students for grades 9 to 12 On March 15. This restructuring of class sizes is part of the government’s plan to trim the 29 billion education budget. Thompson told reporters that less than one per cent of the budget would be cut.

at A news conference last week, Harvey Bischof, president of the Ontario Secondary School Teachers’ Federation, said the government’s plans could result in the loss of 5,700 teaching jobs over four years.

Bischof also said that school boards may find it harder to meet contractual obligations because of the changes.

The Teachers’ Federation president also warned of a possible labour “disruption” over the potential job losses.

Another government change is the ban of cellphones in classrooms starting in September.

“Ontario’s students need to be able to focus on their learning, and not their cell phones,” said Thompson in a written statement.

Currently, individual school boards can set their own cellphone policies. The Peel District School Board has the BYOD program, which encourages students to bring their own electronic devices.

With the new rules, exceptions would be made for students who require special accommodations and classrooms where teachers want students to use their cellphones.

A big change which has concerned many students is the new mandatory online classes that were introduced in early March. The changes will come into effect until 2020 and would require students to complete four of their mandatory 30 credits via an online course.

“Mandatory E-learning is controversial because not every student has the motivation or the resources to do an online course,” said Appleman.

The requirement of four mandatory courses will be the highest number needed to graduate from any high school in North America.

According to a 2016 report by the Northern Policy Institute, communities in Northern Ontario face issues regarding internet accessibility and affordability.

Members of the LGBTQ+ community have voiced concerns saying the new curriculum does not teach students about the LGBTQ+ people and identities.

Jacob Foss, a grade 10 student at John Mcgregor Secondary school said the new sex-ed curriculum is the reason he is protesting.

“I am protesting because the younger generation will become more prejudiced towards the LGBTQ+ community with the new sex-ed cuts,” said Foss.