FLINT, Mich. — Jameka Patrick Singleton’s five-year-old granddaughter has never run through the sprinkler or taken a drink from the hose on a hot summer day.

She is a child of the Flint water crisis and, to her, tap water is poison.

“You turn the tap water on, and she tells you not to drink it,” said Patrick Singleton, who wonders if her young granddaughter will ever trust water from the faucet.

It’s been nearly five years since poisonous lead-tainted water start flowing into the homes of unsuspecting Flint residents in April 2014, when the city decided to switch its water source from Detroit to the Flint River.

The new water supply wasn’t treated properly and as it ran through the city’s old pipes, corrosives destroyed the protective layer, causing dangerously high levels of lead to leech into the resident’s water supply.

Levels so high, that in October 2014, the General Motors plant in Flint stopped using the water, citing corroded engine parts. 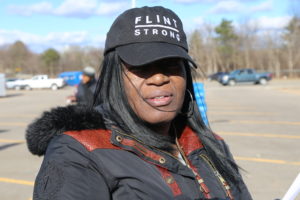 GM’s request for an alternative water supply was quickly met, but nobody warned the residents of Flint, who unknowingly continued to cook, bathe and ingest water that was so toxic it corroded steel.

When a state of emergency was finally declared in December 2015, there had been a deep erosion of trust between the citizens and the institutions responsible for protecting them.

The church, relying on donations, has supplied residents with water they trust, since former Michigan Governor Rick Snyder announced the end of the state-funded bottled water program.

“We have worked diligently to restore the water quality and the scientific data now proves the water system is stable and the need for bottled water has ended,” Snyder said in an April 2018 press release from the state.

But Tillman said residents won’t believe it until they see it.

“All of the pipes have not been replaced,” she said. “So, when you say that the water is safe to drink, technically that may be true, but when it goes through corroded pipes, the water that comes out of your faucet is still damaging.

“Although there are some pipes that have been replaced, you would think that the whole city would be in an uproar of construction and that’s not taking place,” Tillman said.

Residents are in this position because they were assured the water was safe and clean, when it wasn’t, she said.

The FAST Start Pipe Replacement Program, the government’s plan to replace lead and galvanized pipes, was launched in February 2016.

According to the City of Flint’s website, the program initially estimated 15,000 homes would need service line replacements, a number that was adjusted in December 2016 to 29,100, almost double the original estimate.

Candice C. Mushatt, a representative from the Communications/Public Information department for the City of Flint, said over email, that service line exploration, which includes excavating and identifying a service line, typically takes about an hour.

Once a pipe has been identified as needing replacement, the contractor usually begins the replacement right away, the email said.

The email said the whole process takes about three hours, however, unforeseen circumstances can delay it.

Jeff Grayer, a contractor for the city with W.T. Stevens Construction, said Mayor Karen Weaver is doing everything she can.

“When you don’t have the funding, that’s the big problem. The mayor did all she could with the resources she had. And everybody needs to understand that,” Grayer said. 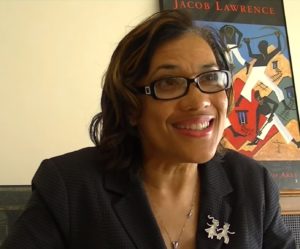 Karen Weaver, mayor of Flint, did not agree with the suspension of publicly funded water for residents. (photo credit: Spectacle TV)

Shortly after Snyder’s April 2018 announcement, a press release from the mayor’s office stated she was not consulted on and did not agree with the decision to cancel the state-funded bottle water program before all necessary pipes were replaced.

And with about 74 per cent of estimated pipe replacements yet to be completed, many residents would rather err on the side of caution, getting their water from community organizations like the First Trinity Baptist Church.

The city plans to have all pipes replaced by the end of 2019 and recommends that residents who need a pipe replacement and haven’t received one, should use filtered or bottled water., Mushatt said by email.

“Obviously, the citizens, the residents here are a little restless and rightfully so. But even with that being said, we are on the uphill climb,” said Grayer. “And we’re going to do all that we can to make our residents believe in trust again, and the water system.”

On April 25, Flint residents will mark 1,825 days since the beginning of the water crisis.