NCAA March Madness Final Four: What you need to know 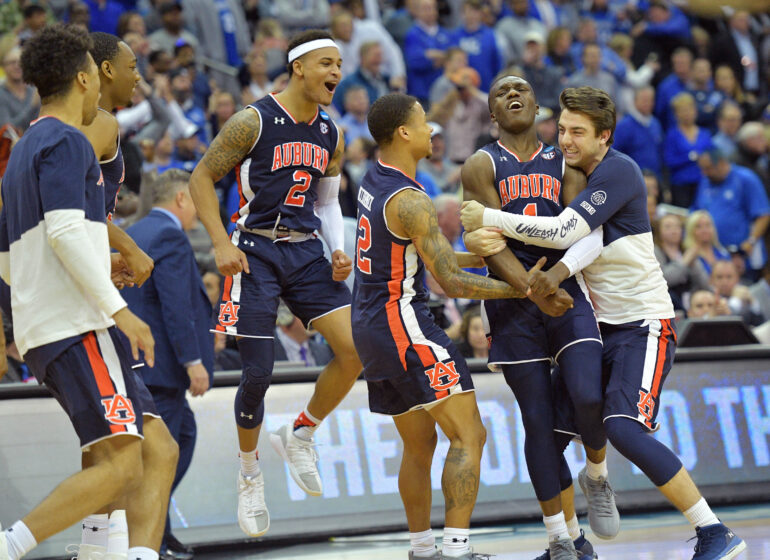 Auburn Tigers players including Jared Harper (1) , Bryce Brown (2) and J’Von McCormick (12) celebrate after defeating the Kentucky Wildcats in the championship game of the midwest regional of the 2019 NCAA Tournament at Sprint Center. (USA TODAY Sports/Denny Medley)

The NCAA March Madness tournament is in its final stage with only four teams remaining.

Number one ranked Virginia, number two ranked Michigan State, number three ranked Texas Tech and number five ranked Auburn round up the final four after outlasting the other 60 teams who were once in the tournament.

The most surprising team to make it this far is number five ranked Auburn, who upset number one ranked North Carolina last week in the Elite Eight, a team that many people thought could win the entire tournament.

Wael Saghir, basketball writer for The Score, expected Auburn to do well, but not this well.

“The five seed is often mocked as a team that falls in the first round to the number 12 team,” Saghir said. “I expected Auburn to have a relatively successful tournament but that meant reaching the Sweet 16 at best.”

Auburn also plays very well together, according to basketball writer for The Score, John Chick.

“I just think they play really good team ball,” Chick said. “(Auburn guard) Bryce Brown also had a crazy game to help them get into the Final Four.”

The coaching also had a big part in Auburn’s unlikely run to the Final Four, according to Saghir.

“In their last two games, they managed to win the turnover battle 18 to 28 against two of the best teams in the country,” Saghir said. “(Auburn’s) Bruce Pearl simply outcoached (North Carolina’s) Roy Williams and (Kentucky’s) John Calipari.”

Chick said that Auburn is this year’s Cinderella story, or the closest example of that.

“If there’s a Cinderella this year, they’d be it,” Chick said. “I don’t think a lot of people coming into the tournament picked them.”

Another surprise to many is number one ranked Virginia making it this far, as they were eliminated by the 16th-seed in last year’s tournament.

“I thought Virginia looked the worst of any top seed in tournament play and somehow they managed to be the only one standing,” Saghir said. “They’ve been terrific all year but they haven’t played up to their abilities and made it in anyways.”

With most of the favourites to win the tournament already eliminated, Chick thinks that the favourite out of the teams left is Virginia.

“This is the same Virginia team that lost last year in that crazy upset.” Chick said. “When you look at it, they are the best team left, on paper, in the tournament.”

Saghir believes that the second ranked Michigan State Spartans can win it all, but the Texas Tech Red Raiders would still be tough for them to get around.

“I pegged (Michigan State) as the team to beat Duke but I really thought Gonzaga (Bulldogs) would be there to stop them, yet here we are,” Saghir said. “Texas Tech is tough for anyone but I’ll run with the Spartans as the favourite.”

This year’s tournament introduced Canadians to a lot of Canadian talent in the NCAA, with Mississauga’s R.J. Barrett expected to be a top three pick in this year’s NBA Draft. Chick said that he was most impressed with Gonzaga’s Brandon Clarke.

“I think Brandon Clarke of Gonzaga had the most stand-out tournament,” Chick said. “He can score, he can rebound and he is the best defensive player on that team.”

With all of the Canadian talent in this year’s tournament, many of these players are expected to be drafted in June to the NBA. Saghir says there could be up to three Canadians in the draft lottery this year, with even more declaring for the draft.