Maple Leaf Square the place to be for playoff hockey 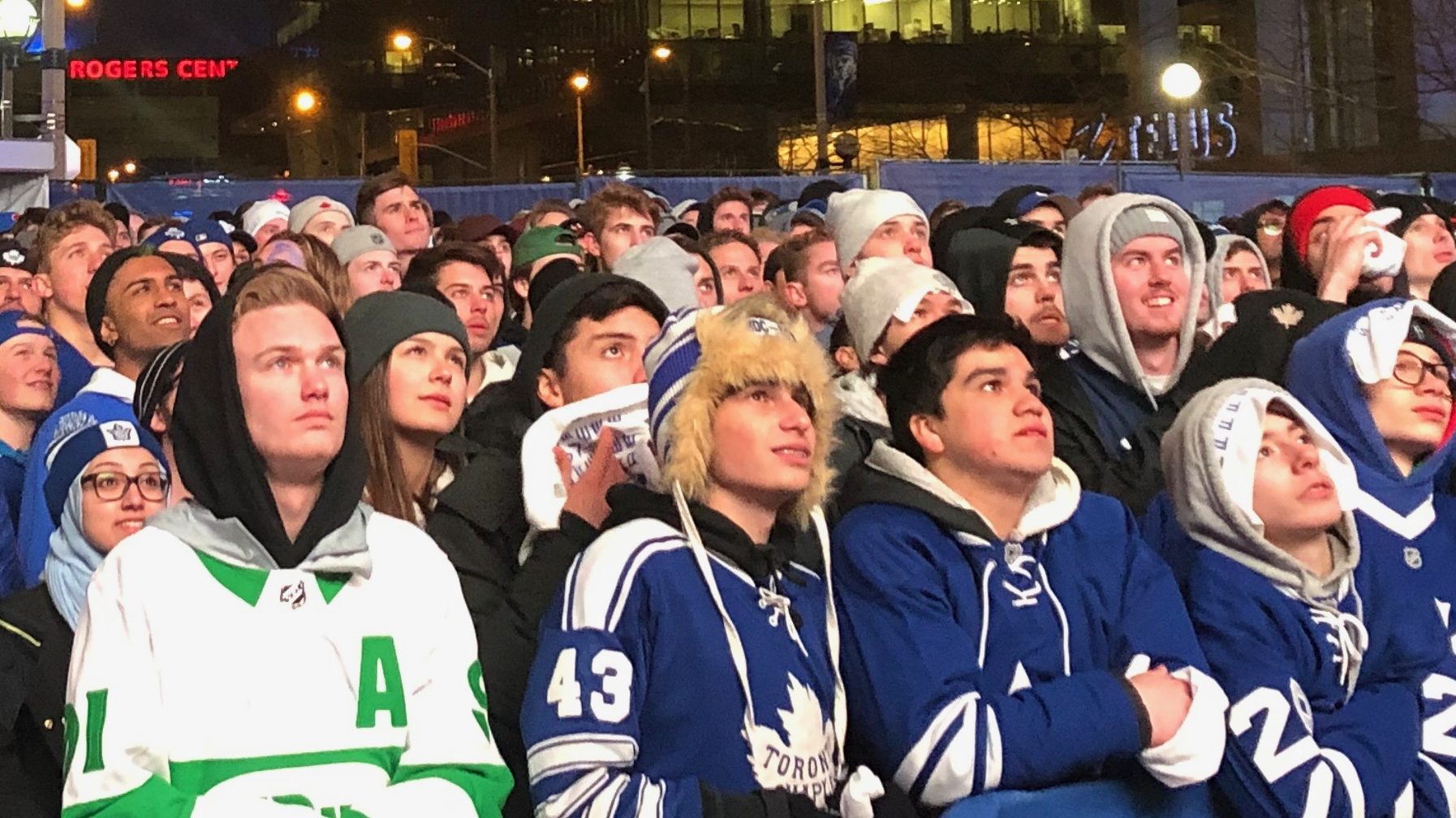 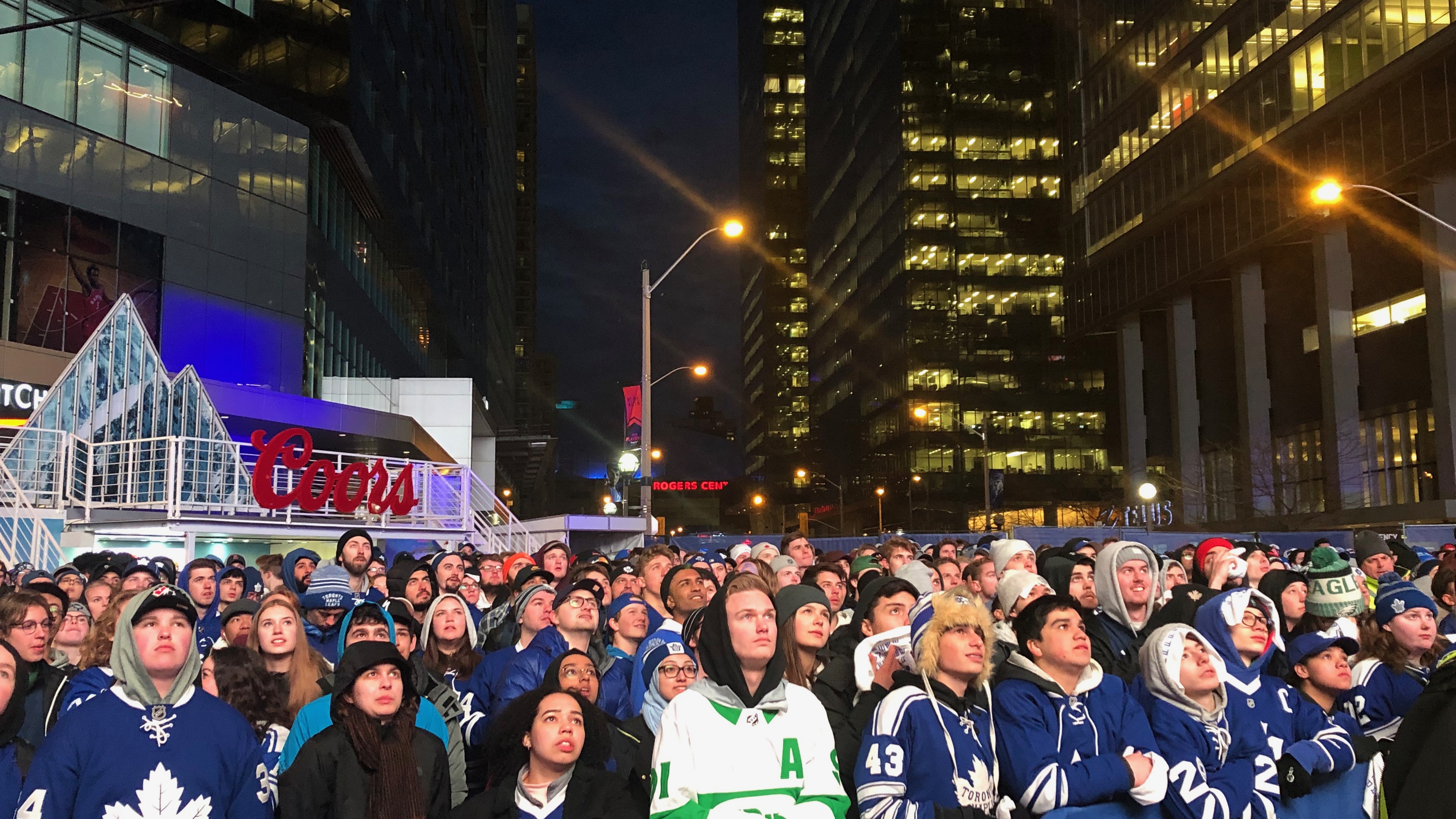 Fans at Maple Leaf Square attentively watching the Toronto Maple Leafs in Game 1 of the first round of the NHL playoffs against the Boston Bruins on April 11, 2019. (Devin Linh Nam)

The NHL playoffs have finally arrived in Toronto, and there is no better place to watch the game than Maple Leaf Square, outside Scotiabank Arena.

Okay, watching the game live inside the arena might be better, but when the Toronto Maple Leafs are on the road, as they were for Game 1 in their seven-game series with the Boston Bruins on April 11, Maple Leaf Square was the place to be.

“It’s all the spirit. As soon as you get in, you feel it, and you want to get involved,” said Nikki Patel, attending the Maple Leaf Square Tailgate with two friends.

“It’s a huge community. At the end of the day, the sports have brought us all together,” Patel said. “It’s awesome.” 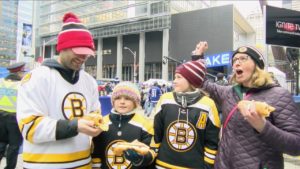 Fans slowly filtered in adorned with all kinds of Maple Leafs gear before the first puck drop. Many wore jerseys with their favourite players’ names on the back from the past and present, and others wrapped themselves in scarves and toques on an abnormally cold April day.

“It’s really cold, but you don’t feel it. Everybody is in the same environment, so you are just going for it,” said Ankur Bhamra.

The experience at Maple Leaf Square is unique, even for a hockey-crazed nation.

Bharma, from Ottawa, made the trip down to Toronto specifically to watch the game at Maple Leaf Square.

“I’m from Ottawa, but I’m a Toronto fan, so this is my first time,” he said. “In Ottawa, we don’t have this experience.”

Even Boston Bruins fans were able to enjoy the energetic atmosphere.

“It’s great to be in this audience to watch a hockey game,” said George Spencer, who was visiting Toronto with his wife Mary and daughters Ellie and Izzie.

“It’s really fun. For the most part, everybody has been really nice to us,” Mary said. “If you can’t be at the game this is great.”

In many ways, Maple Leaf Square is a more inclusive environment because it is free to enter as opposed to the hundreds of dollars it costs for a seat inside.

Despite the party atmosphere, tensions rose when the puck dropped, and all eyes were glued to the big screen.

The Maple Leafs have a storied rivalry with their Original Six counterparts but have struggled as of late losing in the first round of the playoffs in 2018 to the Bruins and heartbreakingly in 2013 in Game 7 of the first round when the Bruins came back from a three-goal deficit. 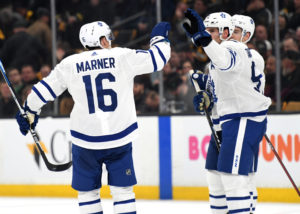 But, to be a sports fan is to be eternally hopeful.

“I don’t want to jinx it, but they are playing really well,” Joseph Austin said during the first intermission when Game 1 was tied at 1-1.

When the second period began, it didn’t take long for Mitch Marner to break through on the Boston goal drawing a penalty shot from a desperate defender trying to keep pace.

In the moments before the penalty shot, the crowd quieted in anxious expectation as one of the Leafs’ top players was readying himself at centre ice.

Marner with deception and grace put the puck past Tuukka Rask and the crowd erupted in unison. Fans danced, hugged, jumped and screamed in celebration of the goal as “You’re Making My Dreams” by Hall and Oates blared on the sound system.

The night continued in that fashion as the Leafs scored two more goals before the end of the game.

It turns out Austin didn’t jinx the Leafs as they won 4-1.

“I feel like if the Leafs win this series against Boston, they are going to go all the way,” he said.

The Leafs currently lead the series 2-1.