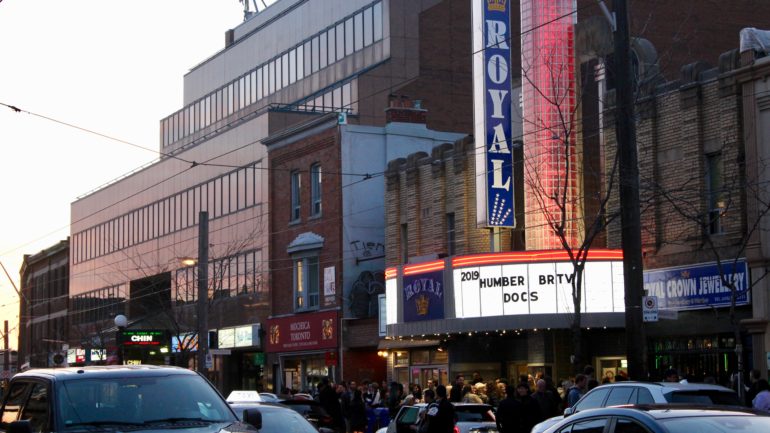 Audiences gather outside of The Royal Cinema on College Street in Toronto, after the screening of Humber Film and Television Production program’s second-year students’ dramatic short films. (Alisha Mughal)

When the short film Boyfriend Season was being filmed in the L Basement at Humber North in February, the cabin the story takes place in seemed small.

Beautifully constructed by the students, it transported anyone who stepped into it into a cozy cloister in the wilderness — but it was small.

Humber Film and Television Production’s second-year students screened their short dramatic films at the historic Royal Cinema on College Street in Toronto on April 24. It was a celebration not just of the films, but also of the work each student did to put the films together.

On the big screen at The Royal, Boyfriend Season’s cabin swelled with the vibrant life of its two leads: an intimidating mother and the boy who wants to date her daughter.

The advanced diploma students knew what they were doing.

“These productions, we write them in first semester of second year, and then we do a vote, and then people put their hat in the ring for different positions and different roles in the productions,” Georgie Luttrell said after the screening.

Luttrell directed Heil Seitan, a film about a girl about to go on a date with another girl, and being nervous about it. It’s a film about the LGBTQ+ community, Luttrell said.

“I’m from that community as well, which I think is also really special, to be a person as head of that creative team,” she said. “To tell a story about that was even more special.”

“It was my first time directing anything of that level,” she said. “I have always wanted to direct, but didn’t really think I had it in me. So last fall, I took a shot and threw my hat into the ring to direct and I got the job, and it was a script I loved.

“I got to work with such an amazing crew, I’ve become really great friends with members of the cast. It was everything I could have imagined, and so much more,” Luttrell said. 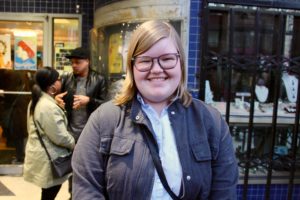 Luttrell was apprehensive about the directing role at first.

“You see so few women directors, which is a big thing I’m hoping will change, and it is starting to,” she said, explaining her nervousness. “I just thought maybe I wouldn’t be up for the challenge, it would be too much work, maybe I couldn’t handle the stress, but I’m really proud of myself, and I think I was able to handle all of it. We had a really fun, easy, comfortable set.

“I just think everybody had fun,” Luttrell said.

She said the experience of directing taught her she had a passion for it and would like to continue to direct outside of Humber.

“I definitely learned a lot about myself,” Luttrell said.

It wasn’t just Luttrell who learned a lot about herself through this project.

“It’s ultimately a really great collaborative experience where everyone comes together and does what they do best,” Darani Urgessa said before the screening. “It’s a final project that we’re proud to screen.”

Urgessa was the director of photography for a film called GuilTV, a dark comedy with a surrealist bent where the main character is sucked into a reality game show. 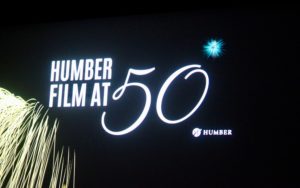 “It was quite a bit of a challenge in terms of the visual effects during [post-production], and also the preproduction elements to make sure that the script was feasible to bring to life, especially within the studio drama parameters,” Urgessa said.

Every student played a crucial role in bringing the evening’s films to life.

“We build the walls, we light the set, we do all the things on our own. It was a bit of a challenge, but it ended up turning out really great. It was definitely an overall great experience,” Urgessa said.

As the cinematographer for GuilTV, she was in charge of framing the scenes, lighting them and the colouring of the overall image.

She made the “critical decisions” regarding these elements of the film and worked with the director help them bring their vision to the big screen.

“We work with a really skilled team of camera people, lighting people, grips, gaffers, and you have a team of maybe about four or five people under you, working the lighting, putting up the lights, executing dolly shots, tracking shots, all the complicated camera movements,” Urgessa said.

“So it is quite a bit of a leadership role, and I ended up really loving the experience, and it’s definitely something I would pursue outside of Humber,” she said.

The pride students had in their work was clearly observable on their faces as they ushered in their friends and family to the screening, and in their smiles as they received congratulations afterwards.

“Given the calibre of the work that we do — I think people with not as much experience yet, they show a lot of promise,” Luttrell said. “I think, when we graduate next year, Canada’s not gonna know what hit ‘em.”