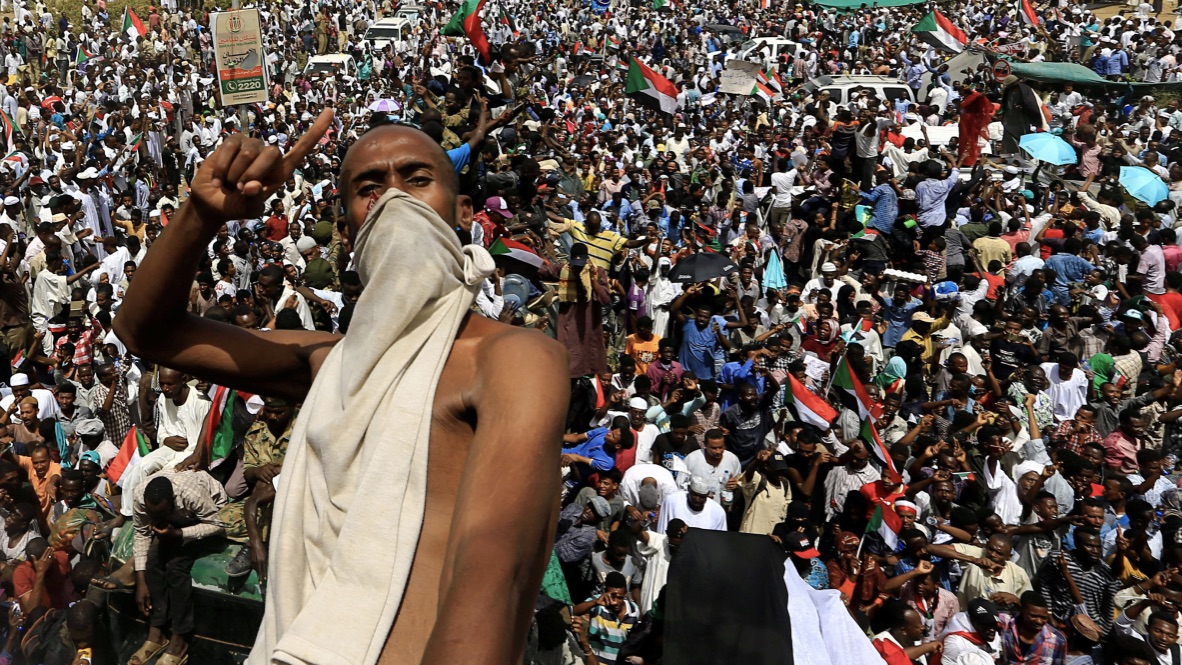 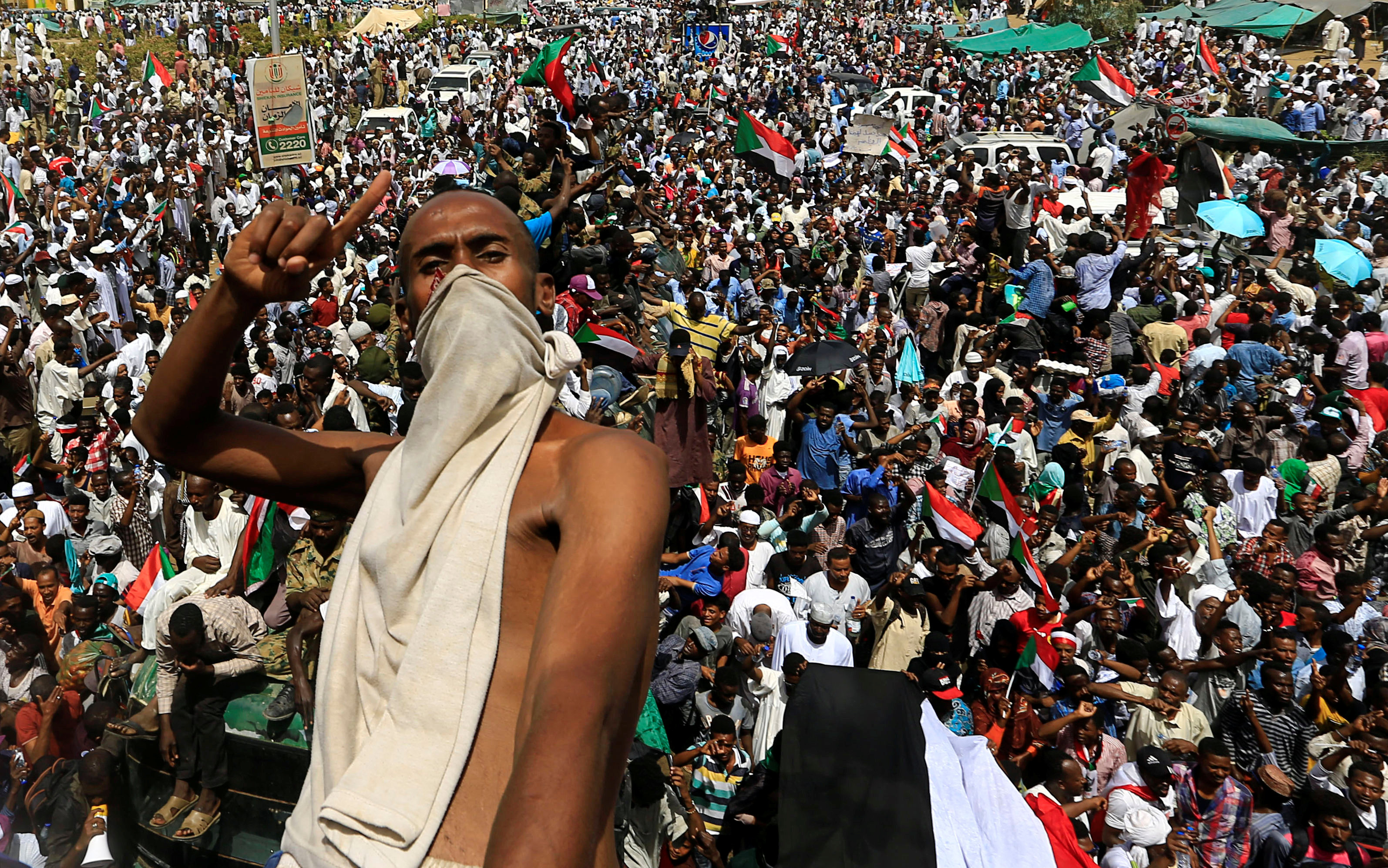 A Sudanese demonstrator gestures while riding atop a military truck as he protests against the army’s announcement that President Omar al-Bashir would be replaced by a military-led transitional council near the Defence Ministry in Khartoum, Sudan, on April 12. (REUTERS/Stringer)

The African Union has ordered the military junta that overthrew Sudanese President Omar al-Bashir to give up power within 15 days.

In a statement released on Monday, the AU’s Peace and Security Council said failing to install civilian rule would result in suspension from the bloc. 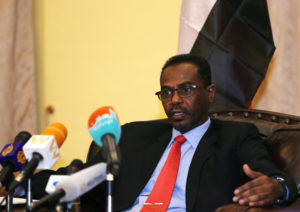 Jalal Eldin, a member of Sudan’s Transitional Military Council, speaks on the current situation in Sudan during a news conference in Addis Ababa, Ethiopia, on April 15. (REUTERS/Tiksa Negeri)

“It won’t happen,” Tag Elkhazin, an adjunct professor at Carleton University’s Institute of African Studies said. “The transitional military council said they respect the AU request, but they are not obligated by it.

“The AU has no teeth […] and the junta doesn’t really care,” Elkhazin said.

The April 11 coup came after months of demonstrations in Khartoum, where protestors decrying rising costs, high inflation and corruption called for an end to Bashir’s 30-year rule, he said.

Following a swift military intervention, the country’s new rulers promised democratic elections in two-years time, along with the loosening of press restriction and censorship, but the likelihood of these promises being kept remain slim, Elkhazin said.

“I see it as an appeasement to the people,” he said, and it appears protestors in Khartoum agree. 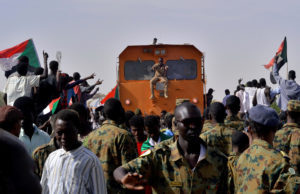 Sudanese military and demonstrators, attending a sit-in, block a train from passing through during a protest outside the Defence Ministry in Khartoum, Sudan, on April 14, 2019. (REUTERS/Stringer TPX IMAGES OF THE DAY)

Demonstrations have continued outside of military headquarters, and don’t show any sign of letting up, a lesson perhaps learned from the Arab Spring nearly a decade ago, Elkhazin said.

“I think protestors have made use of the shortcomings of the Arab Spring. Don’t leave things half cooked once you want to have change. I think the Arab Spring, wherever it happened, Tunisia, Egypt, they didn’t carry it through,” he said.

In Algeria, protestors learned a similar lesson in the aftermath of the resignation of President Abdelaziz Bouteflika on April 2, Elkhazin said.

The ailing ruler’s decision to run for a fifth term sparked weeks of protests across the country and ultimately resulted in the army establishing a caretaker government made up of Bouteflika allies, an outcome less than ideal.

Relieving pressure now is not an option.

Interim President Abdelkader Bensalah is ineligible to run in elections scheduled for July 4, but protestors fear those close to the deposed leader will not relinquish power easily. 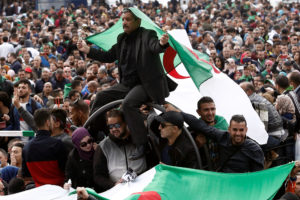 A man carries a national flag during a protest against the appointment of interim president Abdelkader Bensalah in Algiers, Algeria, on April 10. (REUTERS/Ramzi Boudina)

“In both countries, everybody who is anybody owes everything they’ve got, and this means sustenance for their families and what they regard as their future, to the government,” said John Schram, former Canadian ambassador to Sudan. “So, the people in the establishment have a lot to lose and aren’t going to be very anxious to lose it.”

Schram said he believes self-interest drove the militaries in Sudan and Algeria to side with protestors, rather than civic responsibility.

“If their future is more reliably guaranteed by asking Mr. Bashir to step down or push Bouteflika aside, yes, they’ll do that,” he said. “But to ask them to turn over all those levers of power, no I don’t think they’ll do that. Not peacefully or willingly.”

Drawing parallels between recent developments and the Arab Spring may be tempting, but Schram warns expectations need to be tempered.

When it comes to political upheaval spreading to other countries in the region, he is unconvinced.

Sudanese protests were emboldened by the success of demonstrators in Algeria, but it was Bashir and Bouteflika’s advanced age, declining health and loosening grips on power that made their removal possible, Queen’s University political studies professor Andrew Grant said. 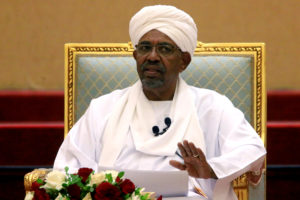 These conditions, however, are only replicated in a few neighbouring countries, making a true Arab Spring 2.0 unlikely, he said.

Uganda and Eritrea both have aging dictators in Yoweri Museveni and Isaias Afwerki, Elkhazin said, but as of yet, no protests have risen against them.

One certainty is that autocratic leaders like Museveni and Afwerki are taking note of events in Sudan and Algeria, Grant said.

“In those other national capitals, they’re watching this very, very closely and behind the scenes they’re likely tightening security, watching for protests starting to build, and then not allowing them to do so,” he said.

Conversely, autocrats may realize the only way forward is by being adaptable, said Ola Mohajer, a former United Nations Coordination Support officer based in the region.

Leaders could begin to introduce principles of democracy through authoritarianism, she said, noting this can be superficial in some countries, but quite meaningful in others. 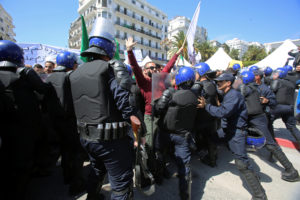 Police confront students as they take part in a protest seeking the departure of the ruling elite in Algiers, Algeria, on April 16. (REUTERS/Ramzi Boudina)

Mohajer believes the initial success achieved by protestors in Sudan and Algeria, namely the removal of Bashir and Bouteflika, will resonate across the region, regardless of the final outcome.

“There’s a lot of power in a collective voice within a peaceful movement,” she said. “Each country will have its own process, and analysts will try to predict the future and it’s not uncommon for them, for all of us really, to be wrong.”

International powers are also turning their attention to the Middle East and North Africa, but they should keep their distance, Schram said.

“The fact is neither the United States or middle powers like Canada should do anything until we know we are working on behalf of most of the people in the country,” he said.