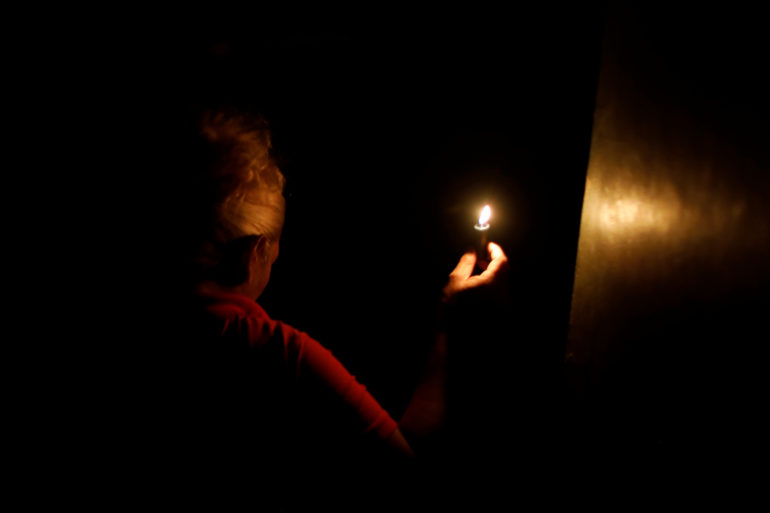 A woman uses a candle as she enters her house during the second day of a blackout in Caracas, Venezuela, March 9, 2019. (REUTERS/Carlos Jasso)

All the remaining lights in most cities around Venezuela were abruptly shut down on Thursday, March 7.

Ivan Diaz was returning from work when the blackout started. Fortunately, he took his bike that day, because he usually takes the subway.

“I wanted to go to the grocery store to buy some stuff we needed for today’s dinner,” he said.

Diaz said he first noticed the power was down around 5 p.m. when the traffic lights were not working for most of his trip to the grocery shop.

“I entered the grocery shop and picked some stuff I needed but when I tried to pay the guy at the counter told me they were only taking cash so I had to leave behind all the stuff I picked up,” he said.

Avelino Goncalves, the owner of the supermarket “Carioca” in the Bello Monte area in Caracas, said his payment terminal was turned off when the blackout occurred.

“I tried to make my card payment machine work on a battery but it wouldn’t turn off, I had to start accepting only cash,” he said.

Taking only cash means taking huge stacks of bills since the country has been experiencing hyperinflation for the last couple of years and it only has gotten worst.

The government blamed the blackout on the U.S., saying the failure was a consequence of a “cyber-digital attack.”

Jose Maria de Viana, an engineer who worked in Hidrocapital (state water distribution company) a few years ago and is familiar with Venezuela’s electrical system, said what the government saying is impossible.

“This system cannot be hacked, we are using very old analogic technology that’s not even digital, it’s electromagnetic. There is no way to hack it digitally,” he said.

There is consensus on most Venezuela media outlets from that what caused the failure was a fire of overgrown ivy that made unusable two of the three main feeding cables from the Guri hydroelectric dam, the main provider of electricity for 86 per cent of the country.

At the governments’ orders to prevent a blackout from occurring, the power was routed to the remaining cable, making it explode, triggering the national outage. 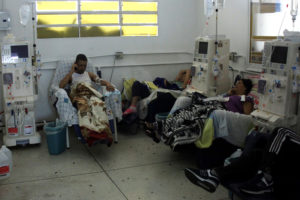 Kidney disease patients wait for staff to operate a generator before receiving their treatment at a dialysis center during a blackout in San Cristobal, Venezuela, March 11, 2019. (REUTERS/Carlos Eduardo Ramirez)

The blackout lasted 72 hours’ time in most of the country, which according to the NGO Codevida, 20 kidney patients and at least 19 new-born babies died.

“Blackouts happen all the time in Caracas and in the whole country, it has never been this long though,” Diaz said.

“I had to put most of my frozen products on sale, it was that or let them rot and lose all the money I paid for them,” Goncalves said.

People from Caracas were also left without water service and many had to go to the El Guaire River to gather water and take baths. This is a highly contaminated river which the government promised to sanitize about 10 years ago.

By Sunday evening most of the power was restored around Caracas but most of the country was still in the dark.

There was a failure on the following 1 a.m. Monday of one of the electric transformers that left many zones in Caracas without power once again. This was fixed by the next day.

From Tuesday on, most of Caracas has been steadily getting power, although some buildings located in the centric Palo Verde area in the Sucre district are going through day 12 without electricity or water.

Other major cities like Maracaibo in Zulia state have been experiencing electric failures every few days with no explanation of why or if it will be repaired.

Maracaibo is also the city that reported the most cases of lootings during the main blackout on March 7. 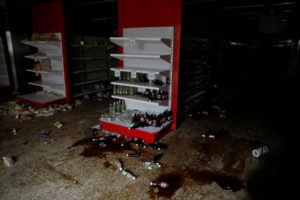 Damage is seen in a supermarket after it was looted during an ongoing blackout in Caracas, Venezuela March 10, 2019. (REUTERS/Carlos Garcia Rawlins)

Viana said the problems Venezuela is having with power supply have been predicted to happen many years ago.

“They don’t care to practice maintenance on the infrastructure and they sacked most the real professionals that worked over at CORPOELEC and Hidrocapital, to hire people with zero knowledge of what they are doing,” he said.

The engineer said if they have had capable personnel at the site when the failure first happened, an experienced engineer could have routed the power to another substation and this all could have been avoided, at least temporarily.

He said this is just a temporary solution because the electrical system is in such dire condition that no permanent fix will work unless the whole system is overhauled and “that’s never going to happen.”

“When you think we are living in the worst possible conditions in this country something always happens to make it even worse,” Diaz said.