UK Parliament to votes in favor of Brexit delay 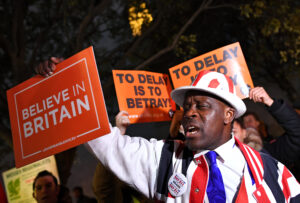 A pro-Brexit protester holds up a sign outside the Houses of Parliament in London, Britain March 14, 2019. (REUTERS/Dylan Martinez)

The UK Parliament voted today to delay the Brexit deadline that was set for the end of March.

This motion means that Prime Minister Theresa May will have to seek an extension to article 50.

May will now need unanimous approval from the 27 EU member states for an extension to go beyond the March 29th date.

Today’s debate came after MPs rejected the concept of leaving the EU without a deal in a non-binding vote yesterday.

If the UK is granted an extension by the EU they may have to elect EU lawmakers as elections to the European Parliament take place in May.

MPs spent the day discussing Article 50 before they voted to delay Brexit. The lawmakers debated the main motion and four proposed amendments which could have changed the course of Brexit.

The Speaker has provisionally selected the following amendments to the motion on extending the #Article50 period:

A manuscript amendment from @LucyMPowell to amendment (i) has also been selected. pic.twitter.com/nO6VGIXQee

Amendment (h) could have been what killed Brexit if the UK voted NO in a new referendum but this had little chance of happening since the Labour Parties Shadow Brexit Secretary.  Keir Starmer said during the debate period that his parties position was not to back the amendment.

“Today is about extension,” said Starmer “The Labour Party is supporting a public vote on any deal that gets through by the prime minister… but today is about a different issue.”

Amendment (i) would have given MPs the ability to take control of the Brexit process.  This amendment was narrowly rejected with 314 to 312.

Amendment (i)  had its own amendment proposed which would have added a limit of June 30th to any Brexit extension but that was rejected before Amendment (i) was voted on.

Amendment (e) was rejected by 318 to 302 votes. Amendment (e) was brought forward by opposition leader Jeremy Corbyn. His amendment wanted to delay Brexit since May’s deal was “decisively” rejected twice and calls for the house to find a majority for a different approach.

lastly, amendment (j) would have stopped a third vote on the Prime Minister’s Brexit deal which was already rejected twice in parliament. Amendment (j) was not moved and thus rejected.

Meanwhile, US president Donald Trump and Irish Prime Minister Leo Varadkar weighed in on Brexit after a meeting in the oval office.

President Trump seemed to oppose amendment (h) calling the concept of a second referendum ” very unfair,” to the people that won. The President expressed concerns about the deal saying that its “tearing countries apart,”.

Trump also echoed an earlier tweet, telling reporters that his administration is looking into a trade deal with the UK.

My Administration looks forward to negotiating a large scale Trade Deal with the United Kingdom. The potential is unlimited!

Prime Minster Vardadkar said he regrets that Brexit is happening.

Vandadkar also told the press he wants to make sure they have “frictionless” trade with the UK and no hard border with Northern Ireland.