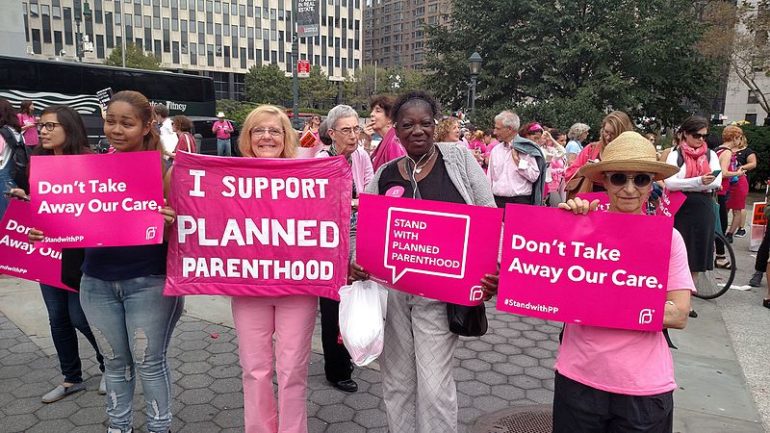 People showing their support for reproductive rights at the “Pink out for Planned Parenthood” event in New York City. Flickr/Otto Yamamoto

The Trump administration is planning to cut Title X funding which would defund organizations that provide abortions or abortion referrals like Planned Parenthood.

These clinics are crucial for low-income Americans and those who are uninsured.

Planned Parenthood is a non-profit organization that provides affordable healthcare and sex education and has over 600 locations across the U.S.

It’s being forced to eliminate many other health services such as cancer screenings, STI testing and treatment, and free birth control as a result of Trump’s Title X cut.

Many people who are low-income, especially young people of colour, rely on Title X related funding in the U.S. as a healthcare resource.

It’s shown that 21 per cent of Title X clients are black and 30 per cent are Latino, according to an Office of Population Affairs report published in 2015.

Planned Parenthood has called the program a “gag rule” against doctors who now won’t be able provide adequate information about abortions to their patients.

“[Title X] will also impact health care providers as it is their responsibility under their professional code of ethics … to provide patients with all of their options so they can make their own decisions,” said Kate Morrison, a second-year medical student at the University of Saskatchewan.

Morrison has been reading about Title X and relating the news to what she has learned in medical school.

“Providers will not be able to simultaneously exist in a system that allows them to practice within the guidelines of their professional code of ethics and Title X,” she said.

Planned Parenthood could not be reached for comment at this time. 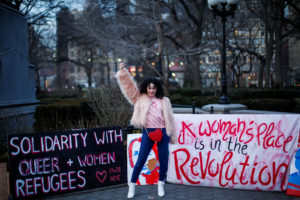 “Title X funding is a crucial source of funding for a vast range of reproductive health care services, particularly to women of colour and those living in poverty,” said Liz Gustafson, an organizer at NARAL Pro-Choice Connecticut.

Gustafson has also been a Planned Parenthood patient for nine years.

“I’ve received cancer screenings, STI testing, and my doctor worked with me to create a care plan when we found out I was suffering from pain caused by endometriosis,” she said.

“They are extremely accessible and the care I receive has always been consistent, professional, informed and supportive,” Gustafson said.

Title X funding totals to about $286 million annually and will now be going towards crisis pregnancy centres known to mislead patients.

These centres are often run by those involved in the U.S. pro-life movement backed by Christian and conservative ideologies.

Many crisis pregnancy centre websites describe their services to be counselling topics related to abortion and pregnancy.

Some people have gone to pregnancy crisis centres hoping to get an abortion or pregnancy information unaware beforehand of the purposes of these centres.

Abortion is currently legal both in the U.S. and Canada but the level of access to abortion clinics is varied.

Certain drugs like Misoprostol, also known as the abortion pill, are covered only by certain provinces in Canada.

There is a disproportionate number of doctors between provinces who have completed the training for the pill and are willing to prescribe it.

The Hyde Amendment in the U.S. also prevents the government from funding abortion services except in cases of lifesaving, incest, or rape.

There are also further restrictions based on state laws in the U.S.

“[The] proposed changes to Title X will prohibit the exchange of information regarding access to abortion care and will reduce funding for other women’s health services,” Morrison said.

“Therefore, the populations most at risk from the … changes include patients who face other barriers to access of information, including those of lower socioeconomic status and those who face language barriers,” she said.

“Planned Parenthood is fighting back through every avenue, including suing this administration for this unethical, harmful, and illegal Title X gag rule,” Dr. Leana Wen, president of Planned Parenthood, said in a press release.