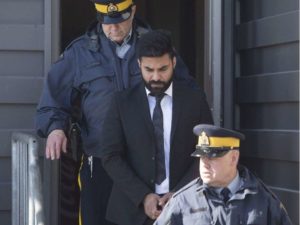 Jaskirat Singh Sidhu is taken out of the Kerry Vickar Centre by the RCMP following his sentencing for the Humboldt Broncos bus crash in Melfort, Sask., on Friday, March 22, 2019. (Kayle Neis / THE CANADIAN PRESS)

The driver who crashed his truck into a bus killing 16 people in Saskatchewan has been sentenced to eight years in prison.

When Jaskirat Singh Sidhu pleaded guilty in January to 29 counts of dangerous operation of a motor vehicle, he said he did not want to make things worse by proceeding with a trial.

Sidhu crashed into a bus that was transporting the Humboldt Broncos junior hockey team on April 6. The team was on its way to a playoff game when the truck collided with their bus, killing players, staff and the bus driver, and injuring 13 others. Sidhu was not injured.

Judge Inez Cardinal said that at the time of the incident, there were no road or weather conditions that contributed to the crash, nor were drinking, speeding or using the cell phone. Sidhu had been driving up to 96 km (60 miles) per hour but was preoccupied with a flapping tarp behind him when he passed several signs indicating an upcoming intersection.

A forensic collision report suggested that he didn’t brake at the intersection of Highway 335 and 35 before hitting the bus.

“Families have been torn apart because of the loss,” Cardinal said. “They are prone to depression, anxiety or outbursts.”

Defense lawyer Mark Brayford said Sidhu was hired by a small Calgary trucking company three weeks prior to the accident. He spent two weeks with another trucker before heading out on his own for his first time, which indicated a lack of training.

After serving his time, Sidhu is likely to face deportation to his home country of India.

The Saskatchewan government has promised to make several changes to the intersection where the crash occurred, and pledging millions of dollars for improvements at other intersections.