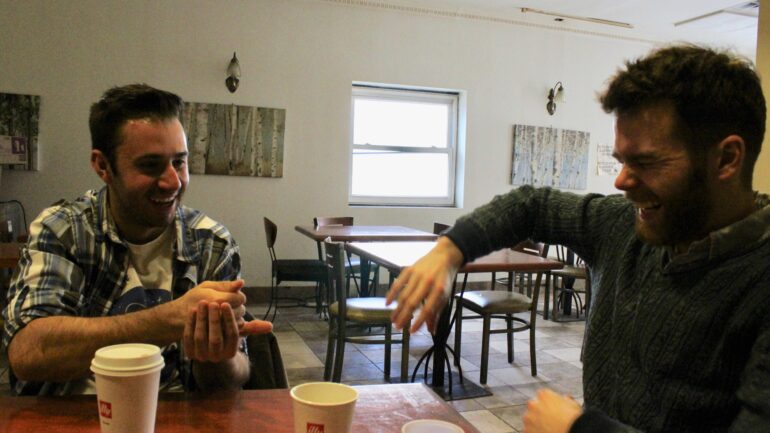 Joe Craib, screenwriter and director, and Sean Meldrum, actor and director, met at Queen’s University in Kingston. They kept running into each other on film sets after graduating. They launched the production company Start the Picture in May 2018. (Alisha Mughal)

The sun-lit entrance of the What A Bagel in Forest Hill Village smacked of a New York bodega.

Crowded with cooling racks airing out freshly-baked bagels and a refrigerator stocked with sandwiches and cartons of milk to the right, it wasn’t immediately apparent that the store opened wide in the back, and had a second floor.

The setting complemented the story unfolding that Feb. 28 afternoon.

Nothing was as it seemed for Joe Craib and Sean Meldrum, co-founders of Start the Picture — a film production company just beginning to establish itself securely on the Toronto independent film scene.

Craib, when he spoke, looked at Meldrum admiringly — appreciative and respectful and ready to pause if Meldrum wanted to speak.

But Meldrum never interrupted. They spoke in turn, and in a way complementary of the ideas of the other, oftentimes the one completing the other’s sentences. One didn’t speak over the other, except to softly add an “Absolutely” or “Exactly.”

If a story has already been told, then Start the Picture will find a new angle for it, Meldrum said.

The new angle could be through a point of view other than their own.

Craib and Meldrum recognize their privilege.

“We recognize who we are, our identities,” Craib said. If they want to create challenging films, they will need to have different voices telling their complicated stories.

“You end up with all these layers,” Meldrum said of bringing diverse voices into the production process.

And Start the Picture wants to “tell stories by Canadians for Canadians that the world would want to see,” Craib said.

A part of the Canadian cinematic ethos, Meldrum said, is a contemporary realism setting.

Craib and Meldrum want diversity in all aspects of their filmmaking. Onscreen, in the writing room, and postproduction. Two of their projects in post-production at the moment — Empty Nest and Step Into My Office — are female-led pictures.

In the pipeline is a picture written by Meldrum called This Street Will Live Forever, starring women of colour. Meldrum is seeking a female collaborator for this piece.

“I’ve tried very hard to avoid a male gaze,” he said. “But there’s only so much I can do,” because he is a man, and this is the fact of his life.

“We’re definitely looking to cast as wide a net and bring in as many different voices as possible,” both behind and in front of the camera, Craib said.

“It can’t just be us,” Meldrum said of their partnership. The core team can’t just be two white guys who went to Queen’s University.

“Female screenwriters, send us your stuff!” Meldrum yelled, cupping his hands around his mouth and leaning toward an audio recorder lying in the middle of the table.

Much of the work Craib and Meldrum are doing is subversive work, although subtly. They want to explode genres. Empty Nest is horror, but it is also about Millennial anxiety surrounding unemployment, failing, and generational conflict, Craib said.

From the Thunder is the picture now in production. It’s a war picture, Meldrum said, but there is no narrative that is glorified, no side that is vilified and no glaring patriotism.

Genres make the audience feel comfortable, and adhering to them allows Start the Picture to sneak in the challenging stories they want to tell.

Being an independent production company means they will need to establish themselves in the Toronto film scene first, Craib said.

At the moment, Start the Picture is a not-for-profit organization. Craib and Meldrum have been self-funding their projects, but this is changing. 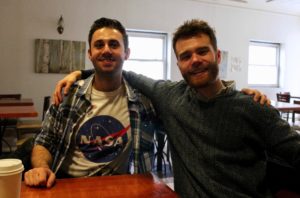 From the Thunder is a short film that will be shot in October or November, Craib said.

This film is “very possibly going to be a way to see some returns,” Meldrum said.

They are building a reputation. From the Thunder is their first picture that was entirely kickstarter-funded, that they didn’t pay for themselves. But it was a very high-stakes campaign. If they didn’t meet their mark, they would not have received any of the money raised.

It would have been a very public failure for Meldrum. Creating art at all puts the artist in a vulnerable position, but this vulnerability is what makes the art so fulfilling, he said.

For both Craib and Meldrum, art is about becoming comfortable with the potential of failing.

Making money, though, is the long-term goal. “We wanted to get out of paying to make movies,” Meldrum said.

Craib and Meldrum feel as though they are waist-deep in the business — but this is not where they want to be.

“We just want to submerge our heads, as well,” Meldrum said. They want the picture business to be their career.

This is a crucial time for the two. On Mar. 4, they launched the crowdfunding campaign for Empty Nest, which is in postproduction at the moment. They need funding for editing, scoring, sound design, and for festival submissions. They need money to make their picture the best that it can be, they said.

At the end of the day, Meldrum wants people to say their work was trying to accomplish something new and different.

“We’d rather fail spectacularly than play it safe,” Meldrum said. “I’d rather be broke and fulfilled than rich and empty.”

“If you create good art, it will be fulfilling in one way or another. Hopefully financially, but also artistically,” Craib added.

“Ideally both!” Meldrum exclaimed, his voice echoing throughout the empty second floor of the only Forest Hill bagel shop.