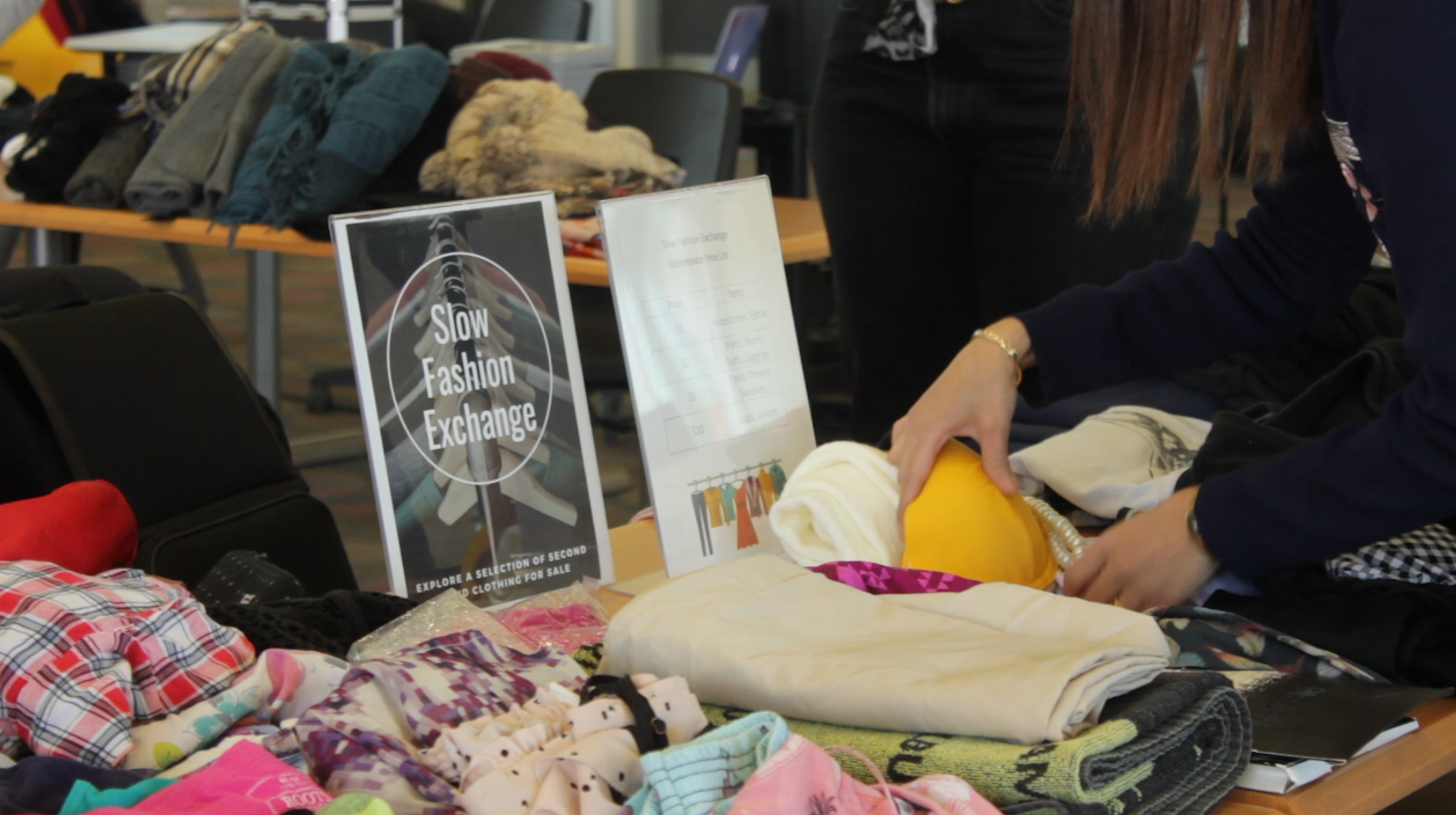 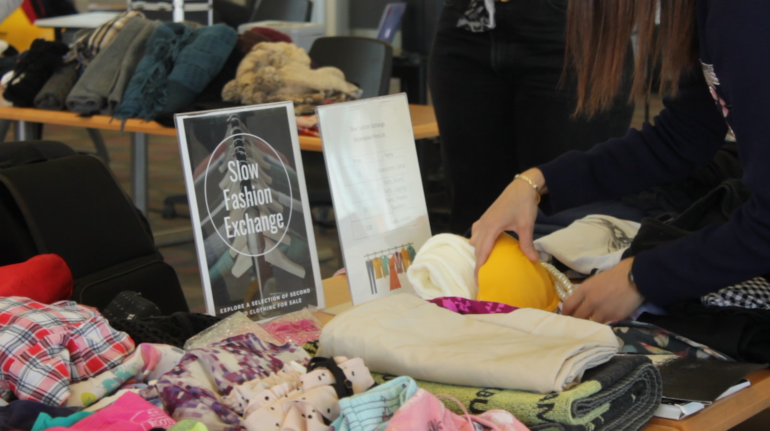 Earth Week at Humber started this week with a discussion and a pop-up experience at the Lakeshore campus all about the Slow Fashion Exchange.

It’s a marketplace and an opportunity to support the sustainable fashion movement by updating your wardrobe for just a couple of dollars.

Along with the marketplace, the event provided the opportunity for people to share their best-piece-of-clothing story at the Selfie Station and to learn what the slow fashion movement is all about.

Francesca D’Angelo, a Fashion Professor at Humber, who was one of the organizers of Slow Fashion Exchange, said it’s one of the key ideas of sustainability.

“I know sometimes you rush because you’ve got an event or something to go to, and you’re welcome to buy something,” D’Angelo told Humber News.

“But really, it’s like, maybe, just slow down and reflect: ‘OK, I need an outfit and it needs to work together.’”

“That’s one of our biggest things – we never have anything to wear but we’ve got tons of clothes,” D’Angelo said.

“Why? It’s because we don’t actually sit there and coordinate,” she said.

The sustainable fashion movement may seem like a new trend but has its origins in the 60s.

Published in 1962, the book Silent Spring by Rachel Carson exposed the damage being caused by agriculture chemicals.

From that point, many people became more aware of the impact of human activities on the environment.

In the early 90s, so-called ‘green issues’ started to appear in fashion and textiles publications.

These publications mostly featured two companies – Patagonia and ESPRIT  – who were the first to take environmental concerns seriously. The companies even commissioned research into the impact of materials they use.

In 1991, they co-founded the first organic cotton conference in California, and in 2002 ESPRIT launched its first ‘ecollection’ based on the Eco Audit Guide, published by Elmwood Institute.

In 1990, ESPRIT placed an ad promoting responsible consumption, and in 2011 Patagonia followed the idea and ran a PR campaign “Don’t buy this jacket”, encouraging people to purchase only what they need.

Katrusia Balan of Toronto’s Solid Waste Management Services spoke at Humber about her experience of understanding how responsible consumption is crucial.

“I worked for YWCA Toronto for instance and we had a couple of shelters […] for women who have faced rape. And when the neighbours get to find out where the shelters are, they dumped lots and lots and lots of clothes,” Balan said during the Slow Fashion Chat.

But their desire to help had a downside, she said, because there are too many clothes everywhere, which is what the Slow Fashion Exchanges are all about.

“We think we’re being sort of well-meaning by dumping clothes on charity like that. But in fact, they can’t manage it. Their staff are totally overwhelmed,” she said.

“And I’ve just seen how much stuff gets donated to charity and it’s not used and it just made me aware of how much we are overproducing.”