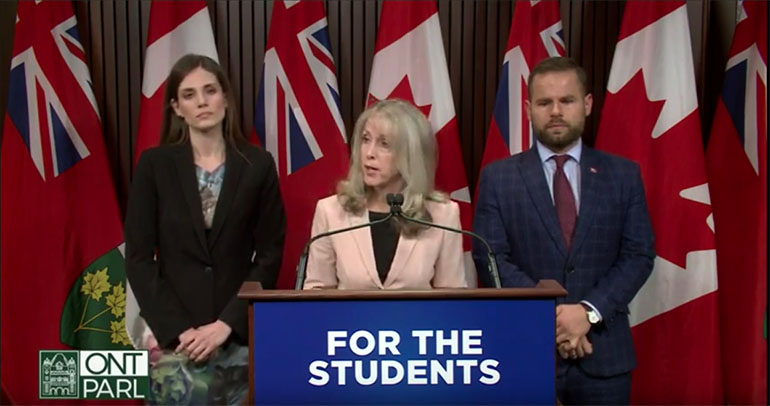 Merilee Fullerton, Minister of Training, Colleges and Universities makes an announcement on sexual violence on campuses.

The report was released Tuesday by the Merrilee Fullerton, the province’s Minister of Training, Colleges and Universities.

“This is not acceptable,” said Fullerton.

“The results of the survey are heartbreaking and disturbing. Of the over 116,000 university students that completed the survey, approximately 63 per cent disclosed at least one form of sexual harassment experience since the beginning of the academic year,” said Fullerton.

An additional 42,000 college students completed the survey and 50 per cent of them reported at least one form of sexual harassment as well. Only 60 per cent of students who reported the harassment were satisfied with their institution’s response, the minister said.

The Ford government is taking immediate action to address this issue, the first being a doubling of the Women’s Campus Safety grant to $6 million. The grant funds safety training for staff, security cameras as well as sexual violence and prevention workshops, Fullerton said.

The next action is a new provision in the Ministry of Training, Colleges and Universities Act, requiring each of the publicly-assisted post-secondary institutions to file an annual report to their boards of governors.

The reports to be filed must include the number of sexual violence incidents, how each school is providing support to students, and how they will address the incidents.

“Students need to know that when they report concerns or incidents of sexual violence, that the institutions are taking the issue seriously,” Fullerton said.

“No one should be afraid of coming forward for help.”

As well, every publicly funded post-secondary institution in Ontario will be required to create a task force by this September dedicated to tackling sexual violence on campus. The task force must also represent the diversity of the students, faculty and administration.

The task force will be charged with creating an independent report on the effectiveness of sexual violence prevention programs at the institution and provide recommendations to improve them.

Fullerton also said that post-secondary institutions receiving public funding will have to review their sexual violence policies by this September.

“It is the responsibility of all colleges and universities in Ontario to have strong policies in place that address sexual violence for the safety of everyone on campus.”

Fullerton said further details of the survey will be released once her ministry is able to ensure the privacy of the participants.

“Our government takes the health and well-being of our students very seriously,” said Fullerton.