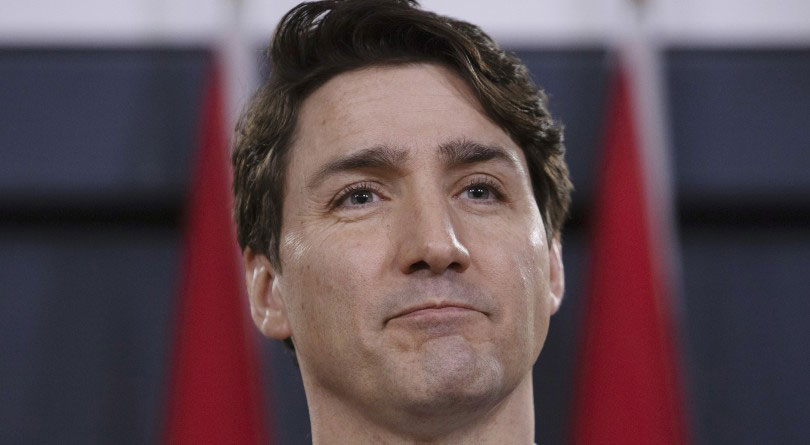 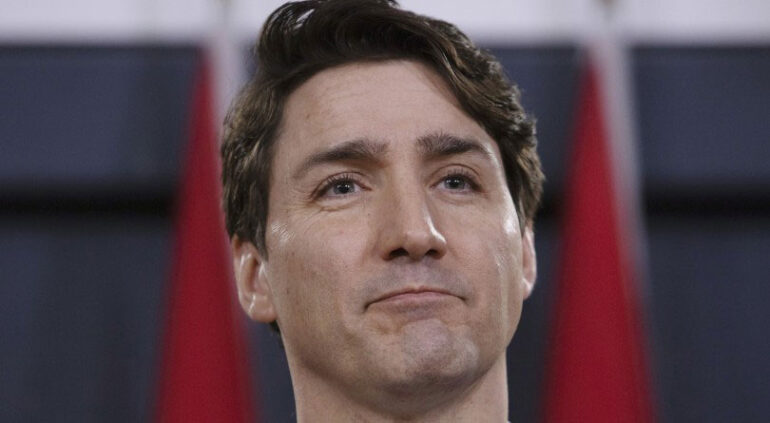 Prime Minister Justin Trudeau said he should have been aware of an “erosion of trust” between his office and former Minister of Justice Jody Wilson-Raybould over the SNC-Lavalin controversy.

At a news conference Thursday in Ottawa, Trudeau stopped short of apologizing for the interactions he and other senior officials had with Wilson-Raybould about the Quebec engineering firm.

“Each of these interactions was a conversation among colleagues about how to tackle the challenging issue. Each came at a time when my staff and I believed that the former minister of justice and attorney general was open to considering other aspects of the public interest, however, I now understand that she saw it differently,” Trudeau said.

Trudeau went on to explain that he didn’t realize there was a breakdown of the relationship with Wilson-Raybould.

“I was not aware of that erosion of trust, and as prime minister and leader of the federal ministry, I should have been,” he said, echoing the testimony of former Chief of Staff Gerald Butts

Wilson-Raybould testified before the justice committee on Feb. 27 that she faced high-level “veiled threats” and months of internal pressure to interfere in the prosecution of SNC-Lavalin, which is facing bribery charges in Libya. That’s because of a principle that allows an attorney general to consult cabinet colleagues but not be directed or pushed towards making a decision related to a prosecution.

As Attorney General and Minister of Justice, Wilson-Raybould had the ability to overrule the prosecution service and direct it to negotiate an agreement with the company, allowing any charges of bribery to be dropped.

The prime minister went on to announce that he plans to seek external expert advice on the dual role of minister of justice and attorney general in regards to how they handle legal matters. 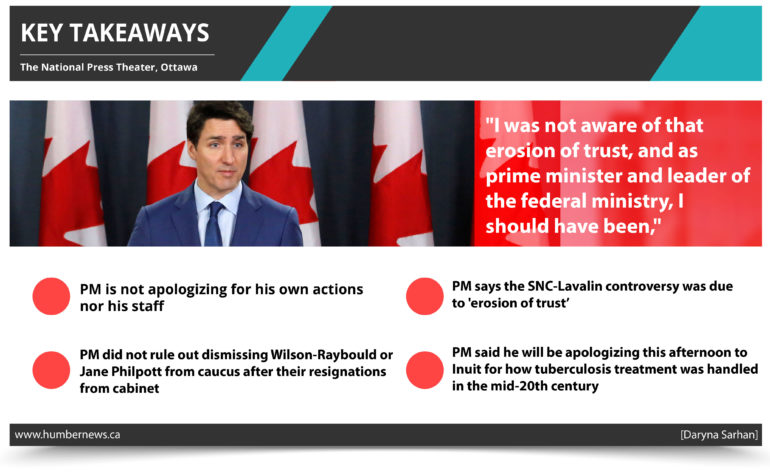 Asked for his thoughts on whether Wilson-Raybould and former Treasury Board President Jane Philpott could remain in the Liberal caucus, Trudeau said that both women had stated a desire to stay despite saying that they don’t have confidence in the government under Trudeau.

Opposition leaders Andrew Sheer and Jagmeet Signh both took to twitter to voice their displeasure with the prime minister’s lack of apology.

What we saw this morning from PM Trudeau wasn’t accountability or an apology – it was the PM blaming everyone but himself.

It was the PM discrediting the detailed testimony of Canada’s first Indigenous woman AG.

The “erosion of trust” is with Cdns – we need a public inquiry.

What we heard from Justin Trudeau was an attempt to justify and normalize corruption. It’s clearer than ever that inside his government, political interference and contempt for the rule of law are a matter of course. This is a PM who has lost the moral authority to govern.

The press conference also saw Trudeau reference his father, former prime minister Pierre Trudeau, who he rarely mentions publicly. He said that he has always considered the ministry of justice to be extremely important due to his father’s influence.

“Throughout his career, he was dedicated to that principle of justice – the just society, the Charter of Rights and Freedoms, and his approach of justice and fairness infused everything he did and certainly was something that he raised me with,” he said