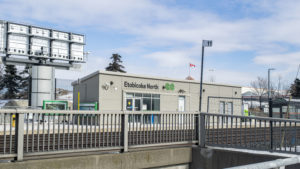 Humber students will soon have a new way to GO to and from campus.

The Ontario Government and Metrolinx are teaming up with Woodbine Entertainment to construct a GO station along highway 27, on the Kitchener GO rail line.

This is encouraging news for students at Humber College’s north campus, which has around 19,000 full time student, many of whom travel to campus from all over the GTHA.

Scott Money, a Metrolinx spokesperson did not rule out the possibility of a shuttle service from the Woodbine GO station to North campus.

“Service integration with our transit partners at all of our stations is a priority,” Money said. “Details of the project are still being negotiated. We will provide updates in the future when more information is available,”

“I think it would benefit students because that means more buses and the buses are pretty crowded right now,” said Ching.

The planned station is about 3.3 KM away from Humber North Campus which is closer to campus then the current Etobicoke North Go which is 5.7 KM away.

The new station will replace the old Etobicoke North Station. According to Money, the infrastructure requirements of the GO expansion program will require the the current Etobicoke North GO station to close.

“The alignment of the new tracks required for GO Expansion will directly impact the existing station platforms and due to site constraints there are no opportunities to reconfigure the station, or the work, to allow Etobicoke North to reopen,” said Money.

In an press conference yesterday, Jeff Yurek, Minister of Transportation and Phil Verster, CEO of MetroLinx announced the plan to build the new GO station at no cost to taxpayers.

The cost of the project will be covered by Woodbine Entertainment who are hoping the GO station will help sustain the horse racing industry and attract visitors.