Jordanian cartoon encourages children to learn about the Arabic language 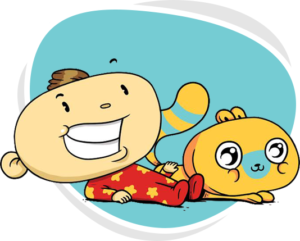 A Jordanian couple was so frustrated to see their son influenced by English media and language that they produced an Arabic cartoon of their own. The cartoon was initially started as an attempt to teach their child Arabic but it soon became a viral hit generating thousands of views across social media platforms.

Ibrahim Taha and Luma Adnani realized that the reason for their child’s lack of interest in Arabic cartoons is the shortage of engaging Arabic content for children. That’s when they knew something had to be done. Luma called her sister for help and together with the illustrator Lutfi Zayed, they created their own cartoon series. The name of the show is ‘Adam wa Mishmish’ which is based on their son Adam and his favourite toy Mishmish.

The couple had a fundraising campaign in 2016 that allowed them to launch their first video on YouTube, which was a song that taught the Arabic alphabet.

‘Adam wa Mishmish’ aims at providing children with an early introduction to shapes, food, animals, colours and other topics.

Before producing each episode, the team writes the story based on events that they experience. One of the episodes highlights the issue of welcoming new siblings, which was inspired by the arrival of Adam’s younger sister, Mila.

The creator’s son, Adam, is their most important critic who gives them an indication of how other children will react to each episode.

“We won’t publish a song before playing it to Adam. If Adam enjoys listening to it and interacted with it, we know this is a hit song, if he listens and doesn’t pay attention, we know that this is not working, so we change it,” said Adnani.

So far, the series has published 37 songs and has also been picked up by a television network.

‘Adam wa Mishmish’ is now being funded by the Abdul Hameed Shoman Foundation, which plans to continue expanding this project. The creators want to launch a series of books and an application. They are also working on an interactive play in which children can participate in and explore their creativity.