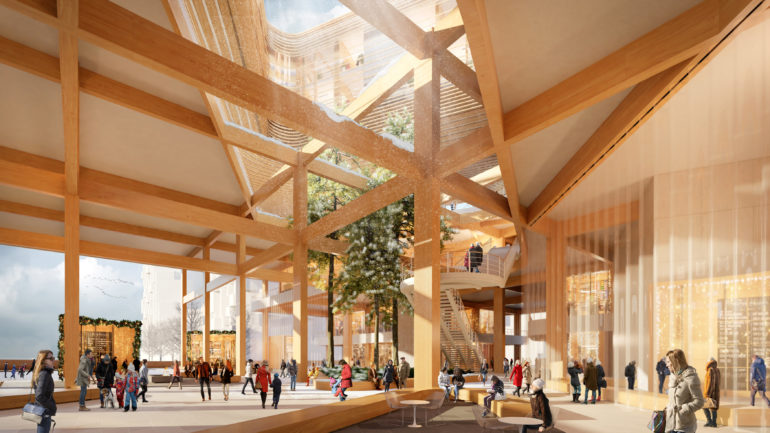 A building interior, part of a proposed redevelopment of Toronto’s downtown waterfront, is seen in an undated artist rendering. (REUTERS/Sidewalk Labs)

Google’s city-building subsidiary Sidewalk Labs is proposing a smart city plan for Toronto’s Quayside neighbourhood and plans for data collection that may infringe on privacy rights.

Sidewalk Labs has already introduced Replica in the U.S., a program for city planners that uses anonymized cellphone data of people’s travel habits to create a city simulation.

The Quayside project, in the city’s east side, has already faced a backlash among privacy experts and Doug Ford’s Progressive Conservative government is also not in favour of the plans.

A poll has found, however, that 55 per cent of Torontonians support the Quayside project which brings up the question if people truly understand the privacy implications.

The poll was conducted online by Environics Research between Feb. 6 to 11 from a sample of 600 people and it was commissioned by the Toronto Region Board of Trade.

The results showed that 41 per cent of those surveyed “somewhat support” the Quayside project and 14 per cent strongly support it.

It also revealed 34 per cent are unsure or don’t have an opinion towards the project and 11 per cent oppose it.

Only half of those surveyed had heard of the project. 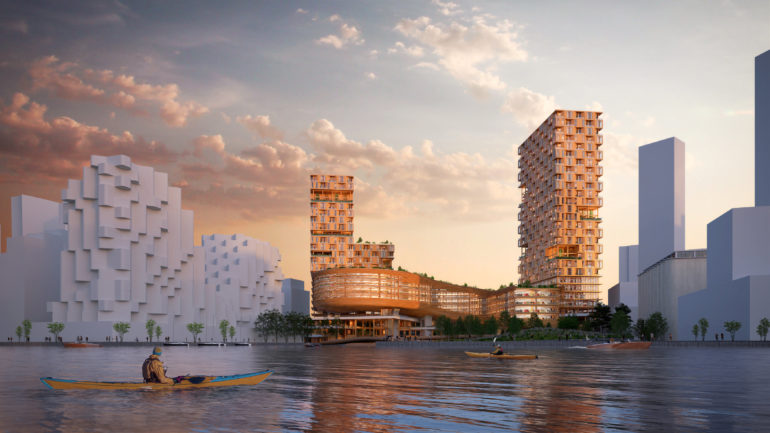 Waterfront buildings, part of a proposed redevelopment of Toronto’s downtown waterfront, are seen in an undated artist rendering. (REUTERS/Sidewalk Labs)

There is no margin of error provided for the poll.

The Quayside project was initially brought to Sidewalk Labs in 2017 by Waterfront Toronto, the government office that advocates for the revitalization of the area.

The group wanted Sidewalk Labs to create a smart city on 12 acres of the Port Lands, which has turned into a larger plan to expand across the entire neighbourhood.

Sidewalk Labs has said that it has no plans for Replica to be introduced to the Quayside project.

Sidewalk Labs is currently using the Responsible Data Impact Assessment within its pilot process to determine if their methods of collection data are reasonable and legal.

This doesn’t mean though that the data collected in the project won’t be copied for future smart city building.

Sidewalk Labs was not available for comment at this time.

Mystery on the Waterfront: How the “Smart City” Allure Led a Major Public Agency In Toronto Into a Reckless Deal with Big Tech https://t.co/diMhPzPMob

“This is a concern especially because there are a lot of ways that data can be collected and used that is lawful but might strike people as unfair or unethical anyway,” said Brenda McPhail, the director of Privacy, Technology, and Surveillance Project at the Canadian Civil Liberties Association.

She notes how the country’s privacy laws were made before the advent of big data.

Even collection of anonymized data can be of privacy risk due to how information can be used to categorize and influence behaviour based on patterns, McPhail said.

It also raises questions of consent generally with collecting location data from cellphones.

“It’s essentially a question of how free we think public space should be, and what limits there should be on…collection of information from and about our movements,” McPhail added.

McPhail is also a member of the Toronto Open Smart Cities Forum, a public form seeking to create openness and transparency around urbanism forms like Sidewalk Toronto. The forum hopes to bring awareness towards the project through commentary and welcomes any member of the public to participate.

This might be useful for the half of those surveyed in the recent poll who are unaware of the project and its implications on privacy.

“The best thing that people can do to improve their privacy is to be politically active and push for legislation that protects our privacy rights,” said Victoria Henry, the digital rights campaigner at OpenMedia.

“Our lawmakers must protect our rights through legislation rather than relying on pinky-promises from companies,” Henry said.