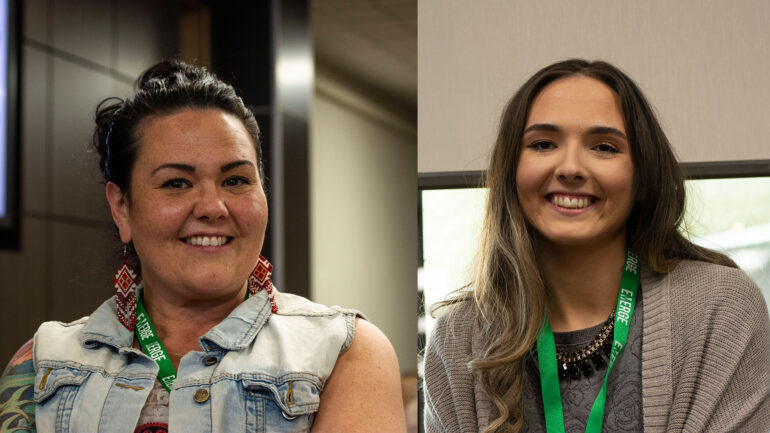 Both Holly Jarrett (left) and Jennifer Flood (right) talk about their activist work for sexual violence prevention and how everyone can support each other. (Terrence Bishundayal)

The University of Guelph Humber’s Through Media to Justice discussion panel on Mar. 19 focused on achieving justice through activism.

Holly Jarrett, an Indigenous activist who started the #AmINext campaign, said that missing and murdered people tend to be ignored unless they have white skin privileges.

Jarrett described her cousin Loretta Saunders as someone with white skin privileges. Jarrett said Saunders’ murder received a lot of attention after she was discovered dead on a New Brunswick highway.

Saunders was doing her thesis on the issue of missing and murdered Indigenous women in Canada, according to Jarrett. The thesis described Saunders’ own story of sexual assault, drug addiction, and trafficked into the sex trade. She wanted to turn her thesis into a book to address the issues Indigenous people face and push for a national public inquiry.

After Jarrett’s cousin died, she launched her #AmINext campaign after receiving a call from Cheryl Maloney, former president of the Native Women’s Association, to speak with her on Parliament Hill.

Jarrett created a video addressed to former Prime Minister Stephen Harper and tagged five friends on Facebook. She said she did not realize the impact the video would have.

However, the violence Indigenous women face is one piece of a larger puzzle.

Jennifer Flood, the sexual violence prevention coordinator at Humber College, addressed the issue of how more young people need to be educated about sexual violence. She said many people are not given the opportunity to learn about consent, which is crucial at a younger age.

Flood said even though people feel uncomfortable talking about sexual violence, a conversation has to happen.

She said sex education is learned through pornography, media and friends, while people are not taught about healthy relationships.

Flood reminded the audience that men who commit sexual crimes against other people often faced violent situations in their life known as a cycle of violence.

While 94 per cent of sexual violence is committed by men, it does not mean they cannot be allies in sexual violence prevention work. Men need to be part of the solution and not only the problem, Flood said.

Children need to be properly educated about consent by teaching younger males to be assertive, not aggressive, Flood said. By welcoming men into the conversation, they are given the space to address difficult questions and know not everybody has all the answers, she said.

Humber’s Consent Peer Education Program (CPEP) hosts various events throughout the academic year, such as Take Back the Night and Bringing in the Bystander. Information can be found on the events section on Humber College’s website or on CPEP’s Twitter page, said Flood.

“’You have nothing to be ashamed of. Regardless of what other people did to you, you still have a voice.’ This was Loretta’s last Facebook post,” said Jarrett.

Both Flood and Jarrett left the audience with the same challenge. They asked everyone to stand up and be brave with their story while telling the truth and being honest to others.

Being truthful and honest starts with empathy and kindness but first all it takes is three to five seconds of bravery, Jarrett said.

The reality is one size does not fit all when it comes to healing, said Flood.