Diversity demands a seat at the craft beer table

Craft beer lovers battled the winter weather and made their way to the Toronto Reference Library on Feb. 27 to hear three experts and craft beer aficionados discuss diversity in an industry they love.

Ren Navarro, founder of Beer. Diversity. and a former craft beer sales representative said diversity in the industry is really just about making more room at the table.

“Quite often people think that if you’re going to talk about diversity, it’s about getting rid of a certain group of people to allow in another group of people,” she said. “That’s not what this is. Bearded white guys in beer, a-okay, don’t go anywhere.”

It’s not about pushing anyone out, but rather saying “shove over. I want to sit there too and I want to enjoy this beer,” Navarro said.

“I’ve always felt that diversity was bringing people from different backgrounds, different viewpoints and different life experiences in,” she said.

It’s about providing an inclusive, safe and welcoming environment where those people can thrive, LeBlanc said.

Tej Sandhu, one of the founders and owners of Merit Brewing in Hamilton, said he always connects diversity with opportunity.

It’s also not just about growing the number of people at the craft beer table, but also growing what’s being served at the table, he said.

There’s so much to diversity in craft beer, from the inclusion of different genders and ages to the LGBTQ+ community, to racialized and Indigenous communities, to differently abled communities, she said. 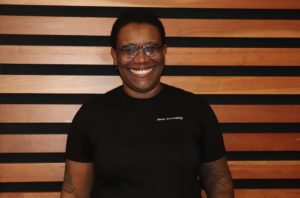 Ren Navarro, founder of Beer. Diversity., has dedicated her career to promoting diversity and inclusion in the craft beer world. (Caitrin Hodson)

“How do we say to someone who doesn’t fit the white-bearded man craft-beer-drinker image, that they too can have a seat at the table?” Navarro asked.

LeBlanc said consistent and continuous community engagement is essential, but seeing companies use high-profile events to promote their own business, is frustrating.

She referred to this as “performative ally-ship”, citing social media marketing campaigns and posts used to promote a brand that doesn’t engage with communities outside of highly publicized events, like Toronto Pride.

“Breweries that otherwise would not do anything for LGBTQ+ initiatives suddenly are just like, ‘Oh ya, rainbow flags! See we’re great,’” she said.

“When you’re truly engaging in those communities and not posting about it and you’re not speaking about it except for internally and talking about these things as part of your company culture, that’s when it has the most impact and that’s when it shows that you care the most,” Sandhu said.

His staff initiated a program that uses their culinary skills to cook meals for women at Hamilton’s YWCA.

“Every month we head down to the YWCA to give meals and to make sure that these women feel appreciated, that they feel special, that they are not just going to a soup kitchen,” he said. “This is a proper sit-down, served meal that feels like a restaurant experience and that’s uplifting and that’s special.”

And there are breweries in rural and urban Canada and the U.S. making consistent contributions to their communities as well, LeBlanc said.

And in 2014, The Boston Beer Company, which brews Sam Adams beer and was the largest sponsor of the Boston St. Patrick’s Day Parade, withdrew because applications to march from the LGBTQ+ community were being refused, LeBlanc said.

But it’s not always about calling it out directly, she said.

“You vote with your dollars. You don’t have to go in and say I have a problem with what you do, you can just say, ‘I’m not buying it,’” she said.

LeBlanc said there’s enough choice to not only enjoy the beer but to choose it based on more than just how it tastes.

And the answers aren’t always deep or complex when it comes to diversity and inclusion, Sandhu said.

Navarro told a story about a friend running a home brewery who couldn’t figure out why women weren’t attending their events.

A few questions into their conversation, she discovered the events were being held in member’s basements – not the most conducive environment to female attendance.

Once they started partnering with breweries instead and holding their events there, women started showing up.

“It’s not being black or white, there’s so much more to it,” Navarro said. “It’s about feeling welcome and safe.”