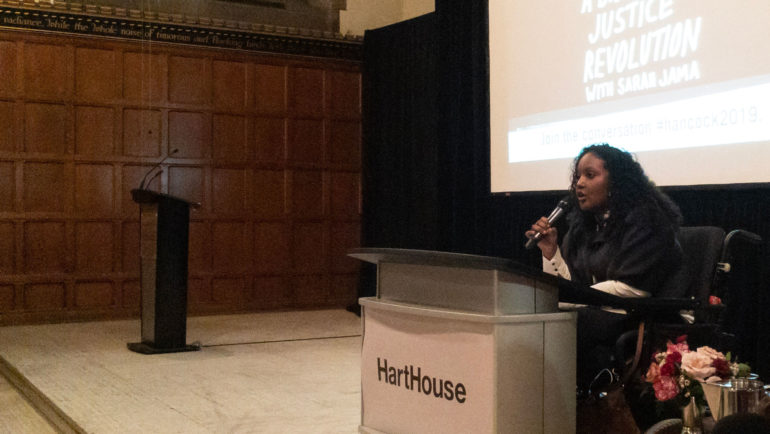 Sarah Jama spoke on March 14 at the Hart House lecture hall after her speech was rescheduled due to inclement weather on Feb. 08. (Terrence Bishundayal)

Sarah Jama, a co-founder of the Disability Justice Network of Ontario (DJNO), said people with disabilities should learn to voice their concerns without expressing anger during a speech about creating a disability movement delivered at the University of Toronto on Mar. 14.

People with disabilities coming together and creating a movement is one step forward, however, they must create change from an approach of love rather than anger, Jama said.

Constant anger does not solve the problem, as angry people are not building one-on-one relationships with each other.

Jama said she struggled with this because it’s difficult not to come from a place of anger and not many are able to communicate with love.

People learning to love each other will become better at organizing, whether or not people understand each other’s experience and disability or agree with them. But it should be expressed towards everyone, not just the people someone cares about.

Conversely, terrible people are those who do not care about other people except for themselves, she said.

Jama remembered attending the Special Education Committee Forum to advocate on behalf of a student who wanted to attend Etobicoke School of the Arts, housed in a structure which was not accessible.

Chris Bolton, former TDSB chair, said Jama had no right to be there. He asked what gave her the right to advocate for another student.

“Why is it that people with disabilities are consistently left out of conversations? I was trying to figure out instead of just reading about it, what can I actually do that’s in my power to make change,” Jama said.

For that, spaces need to be created to talk about issues that matter, as sitting behind a computer and sharing your thoughts is not enough, Jama said.

A member of the audience asked how people with disabilities can deal with a system that continues to phase them out and tells them they do not have a voice.

Jama’s response was that she does not have all the answers but growing up she learned a lot from her mother, who was her biggest advocate. Her mother taught her to fight the system and how to speak for herself. Not everyone will fight their battles the same way, but Jama learned how to care for herself.

However, she added, people must continue working together and share their story. Creating a movement means building connections and talking about why the concerns of one person connect to other people.

Another audience member asked what the DJNO is working on and how people can support them.

Jama explained the DJNO’s research committee is partnered with the Ontario Human Rights Commission, conducting a study about the issues racialized people with disabilities have encountered.

The campaign committee will host a rally on Mar. 30 at Queens Park to discuss the violence against people with disabilities in the United States, where physical and sexual abuse of those with disabilities is estimated at twice the rate of that in the general population. The family of Ashley Smith, a Canadian teenager with mental illnesses who took her own life while incarcerated, will be speaking.

A town hall meeting is scheduled in Toronto, with DJNO partnering with the AODA Alliance’s David Leprosky and Joel Harden, a disability critic.

“I got asked to speak at this lecture because of my own privilege. I can communicate easily to others and don’t need any assistive devices, meaning it’s not any work for the people who have asked me to speak. However, everyone deserves the opportunity to be heard,” Jama said.

She reiterated that love is the way to build connections and create a movement of change.