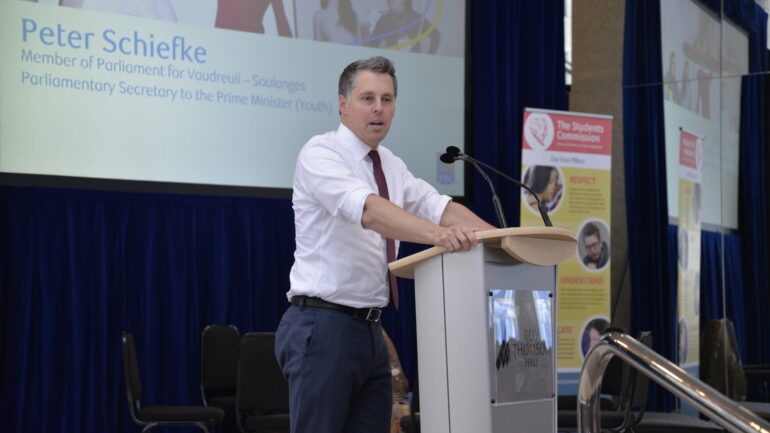 Peter Schiefke, Member of Parliament and Parliamentary Secretary to the Prime Minister, deliver speech as a representative of PM at Students Commission Canada conference to thank and encourage them for future projects. (Pragati Kaushal)

“Empowering youth will empower the nation.” 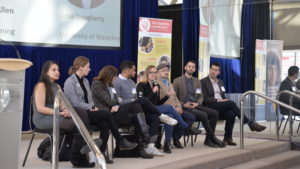 Guest speakers discussion during the event discussing about the development of youth in education and job sector. (Pragati Kaushal)

That was the message at the #CanadaWeWant youth movement conference, which was organized by the Students Commission of Canada with help from RBC Future Launch Funding, a youth employment program sponsored by the bank.

More than 150 youths from each territory and province worked with them for six days, from Feb. 27 to March 4.

Nadeleine Ross, coordinator of the #CanadaWeWant movement, said this year their 40 projects were approved by the Canadian government, which was very diverse and met the specific needs of youth from different communities.

The objective is to support young people as they deliver community actions projects that address specific needs, she said. 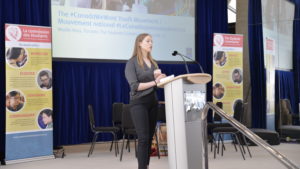 “The participants are volunteers and after the conference, they will go back to their communities and deliver these actions projects plans,” Ross said.

Vishan Persaed, a senior manager with Youth Innovation at RBC, said they are providing $5 million to charitable organizations and government academic partners to empower young people with the jobs of tomorrow.

“We bring the partners together and seek out the students from different schools and communities to cooperate the solutions, all across the country,” he said.

Persaed said they are providing funding to the Students Commission of Canada to help solve the kind of problems students face.

Chante Speidel, a participant in the #CanadaWeWant conference at the Roy Thomson Hall, said the event promotes the youth voice in which they express about how they feel, struggle, and what are they dealing with at home.

“It gives us a chance to change the world and share our voice,” she said.

The main highlight of this event was a thank you speech by Peter Schiefke, the Parliamentary Secretary to the Prime Minister for Youth Affairs.

He said governments are very supportive of the Students Commission where they brainstorm and express ideas to build a better Canada.

Kianna and Amanda have been at the @StdntsCmmssn #CanadaWeWant conference this week sharing their experiences with our Hands to Larger Service program. While there, they connected with @PeterSchiefke and chatted about why community service is so important to them! #LeadersToday pic.twitter.com/tH5aDnsEqY

Schiefke said he’ll take the feedback from students and share it with the prime minister.

“The Students Commission facilitates people from all across the country coming together which is rare where they bring youth together from all different backgrounds to share their ideas to build a better Canada,” Schiefke said.