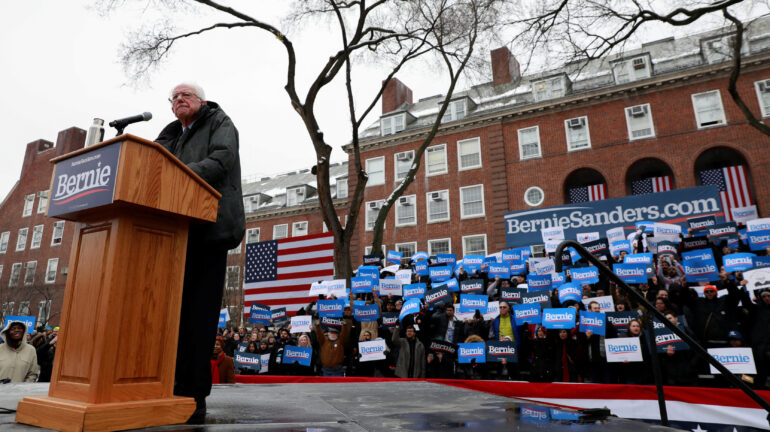 Bernie Sanders spoke about his working-class roots on Saturday, remembering his upbringing in the “three-and-a-half room, rent-controlled apartment,” not far from where he kicked off his 2020 campaign at Brooklyn College.

Contrasting his family’s personal experience of fascism and the Holocaust, Sanders spoke to the crowd about his father’s escape from the nightmare. He said “virtually” his entire family there was wiped out by Hitler and Nazi barbarism.

It was one of several distinctive signs his campaign will be different the second time around, not least because the 77-year-old democratic socialist is running to win.

In what appeared to be a direct shot at President Donald Trump, Sanders roared, “I know where I came from! And that is something I will never forget.

“I know what it’s like to be in a family that lives paycheque to paycheque,” Sanders howled, to the frenzied crowd.

Campaign figures estimated the crowd at about 13,000 supporters, many having spent hours in the freezing mud, bitter cold and snow.

“I did not have a mom and dad who gave me millions of dollars to build luxury skyscrapers and casinos and country clubs,” said Sanders, invoking his long track record and firm commitment to advancing progressive politics.

“But I had something more valuable: I had the role model of a father who had unbelievable courage in journeying across an ocean, with no money in his pocket and not knowing a word of English,” he told the jubilant crowd of his family’s immigrant past.

That personal story was a defining feature in Sanders’ speech. He drew parallels between his personal story, the dangers of authoritarian fascism, and the threat of right-wing nationalism in America.

And selecting Brooklyn College, where he attended for a year before transferring to the University of Chicago and joining the civil rights movement, as the venue to launch his campaign was doubtless by design.

“Donald Trump wants to divide us up by the colour of our skin, where we were born, our gender, our religion, and our sexual orientation,” Sanders said. “We are going to do exactly the opposite.

“We are going to bring our people together — black, white, Latino, Native American, Asian American, gay and straight, young and old, men and women,” he said. 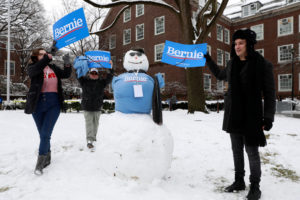 People pose with a snowman before a rally held by U.S. Presidential Candidate and Vermont Senator Bernie Sanders at Brooklyn College in New York City on March 2, 2019. REUTERS/Andrew Kelly

Sanders’ popularity is sky-high among other American politicians following his presidential run in 2016 when he lost the mantle to Hillary Clinton.

And African American voters recently gave the Vermont senator the highest favourable rating at 73 per cent, according to a survey conducted by the Harvard-Harris Poll, an issue that plagued his campaign in the 2016 primaries, and ultimately prevented him from securing the Democratic nomination.

But his life story and experience remains relatively unknown. In that vein, his campaign team is attempting to reintroduce him, in an effort to show his candidacy has evolved.

“Bernie Sanders is really trying to position himself as a leader of a political revolution,” said Toluse Olorunnipa, White House reporter for the Washington Post.

“He’s [targeting] President Trump’s voters, who said that they were voting to blow up Washington, and they wanted to put somebody in there who was going to look after the forgotten man and woman,” Olorunnipa said.

“He is really targeting those voters by saying, ‘you know, I [belong] to the working class community. I grew up not having a $200,000 allowance like President Trump did,’” he said.

The campaign has also sought to fend off a wave of sexual harassment allegations and pay inequity from the 2016 primary, saying it will confront the issue by instituting mandatory training while providing fixed pay compensation for his campaign staff.

“Bernie has the grassroots organization already in place. That’s the difference between this year and last time around,” said Janet Rawson, an activist with the Democratic Socialists of America (DSA), which has seen its membership boom to 55,000 from 7,000 members.

“If you consider [Sanders’] credibility on economic issues, he has a very good chance of beating Donald Trump,” she said.

Rawson said the DSA is adamant to further progressive ideas through grassroots activism in communities, and their focus is not limited to traditional party politics.

“We’re going to win this election because we will put together the strongest grassroots coalition in the history of American politics,” Sanders said to the fervent crowd.