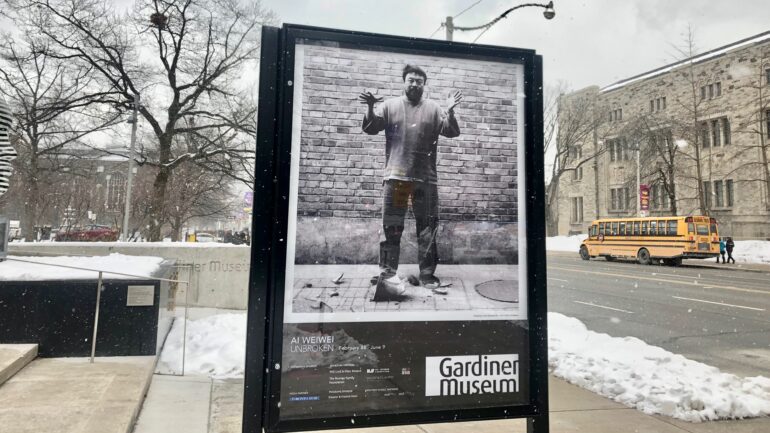 From a distance, the six blue porcelain vases stacked one on top of the other resemble ancient Chinese porcelain from centuries past.

Upon closer inspection, the illustrations on the vases tell a contemporary story about war, environmental disasters, oppressive governments, and human migration.

The tower of blue porcelain called Vases with Refugee Motif as a Pillar (2017) is one of the many artworks on show at the Gardiner Museum’s exhibition, Ai Weiwei: Unbroken running until June 9.

Sequoia Miller, the Chief Curator at the Gardiner Museum, said the piece is one of his favourites in the exhibition and is key to presenting Ai’s full history with ceramics.

“It’s really dramatic and large. It is also his most recent work in ceramics,” Miller said. 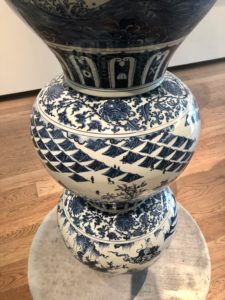 A close look at Vases with Refugee Motif as a Pillar (2017). (Devin Linh Nam)

“You look at it and you think it is Chinoiserie porcelain,” Moodalie-Huennemeier said. “You need to go up close to actually understand his narrative.”

Ai, a Chinese contemporary artist and human rights activist, is world renowned for challenging the powerful and exposing injustices with his art, which has made him a wanted man in his native country.

Moodalie-Huennemeier attended the exhibition with her family and was struck by Ai’s ability to tell deep and intricate stories by playing with expectation and form.

The pillar, like much of the work in the exhibition, combines new concepts with old traditions.

“I’m very much impressed how he is using these old Chinese techniques in order to translate modern image,” he said.

“He’s using a decorative piece to transport a political message, and it’s quite amazing,” Huennemeier said.

Many of the artworks in the exhibit located on the third floor of the museum showcase Ai’s fearless iconoclasm, like Dust to Dust (2009), which features ground pottery from the Neolithic era, and Zodiac (2018), which pictures the twelve zodiac animals important in Chinese tradition made with Lego bricks.

Ai has demonstrated in his art his ability to work with a range of materials and mediums. 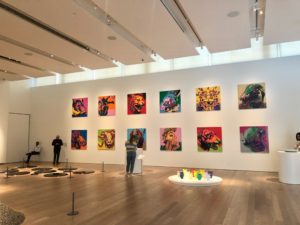 Zodiac (2018) and other works of art by Ai at the Gardiner Museum. (Devin Nguyen)

One of the main objectives of the exhibition, which has been in the making for a little over a year, is to spotlight Ai’s ongoing relationship with ceramics and the history of ceramics in Chinese tradition.

“What stands out in his work with ceramics is the complexity and depth that he engages with the medium,” Miller said.

The exhibition comes at an especially pertinent moment because of the conflicts that are taking place in Canada and across the globe.

“I feel like it is an opportunity to add to the conversation between Canada and China. The one thing we see in his art is the capacity of visual art to open new ways of thinking,” Miller said.

“It can be relevant and present without being propagandistic,” he said.

The exhibition especially moved Moodalie-Huennemeier and her husband because of their own experiences with refugees and their understanding of the different refugee crises currently unfolding all over the globe.

“The whole issue of breaking boundaries. That is exactly what we need in this world today,” Moodalie-Huennemeier said.

“We lived for quite a while in Hong Kong, and we worked with Vietnamese refugees there. We experienced firsthand what it is to be homeless and to be in detention,” Huennemeier said.

There are several events that coincide with the exhibition — lectures, workshops, panel discussions —  as well as a publication that will be available in the coming months, which features work responding to the Ai exhibition from a Canadian perspective.

“One aspect of the show was to tie it to experiences of people in Canada and Toronto,” Miller said. “What are the issues and what do they mean to Canadians?”

The publication, instead of a traditional catalogue book, will be a folio that opens similar to an envelope and will feature contributions in response to Ai’s art from people in different fields, he said.