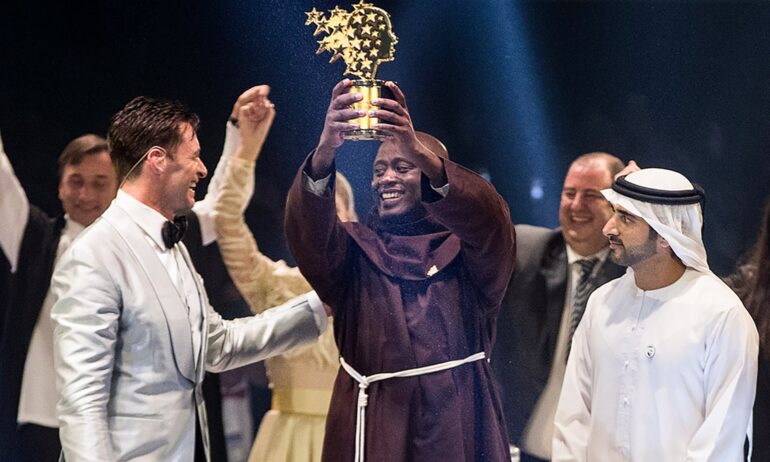 Peter Tabichi, a science teacher and clergyman from rural Kenya, has won the 2019 Global Teacher Prize given out by the Varkey Foundation in Dubai.

Brother Peter, as he is called, is a Franciscan friar and member of the religious order founded by Saint Francis of Assissi in the 13th century. He received high praise for his work with disenfranchised school children and their families in Kenya.

The award ceremony that recognized Tabichi’s above and beyond service to his students took place in Dubai. Tabichi spends 80 per cent of his wages on making sure that the children of the Keriko Mixed Day Secondary School in Pwani Village, Nakuru, have books and other materials that are essential for keeping them in school.

Many of Tabichi’s students have lost their parents or have been orphaned but that does not discourage the 36-year-old teacher from being optimistic.

“To make learning interesting I have to be innovative. I have to motivate students to participate in things like science fairs and now they have done so well they’re are shining.”

From extremely overcrowded classes, students having to travel 6 km on damaged roads to get to school, to a lack of adequate internet services, Tabichi has seen it all, yet his students have been victorious in national and international science competition as far as the U.K.

Tabichi said, “I was excited. I found myself shedding tears because of all the challenges I have been through, the challenges the community have been through it reminds me of what is happening back home, but I would like to make my school like a model school that other schools from Africa and the rest of the world would aspire to be like.”

Tabichi, who eliminated 10,000 contestants from 179 countries around the world to emerge as the best teacher, had the judges also singing his praises by saying that his work with his students played a very important role in making them shine academically even in the face of much adversity.

Kenya’s President Uhuru Kenyatta congratulated Tibichi saying, “Peter, on behalf of all Africans let me congratulate you, you are a shining example of what the human spirit can achieve, not just for Kenya, not just for Africa, but for the world.”

The founder of the prize, Sunny Varkey, said he hopes Tabichi’s story will encourage others who intend to enter the teaching profession to shine a bright light on the hard work that teachers do in Kenya and across the globe each day.