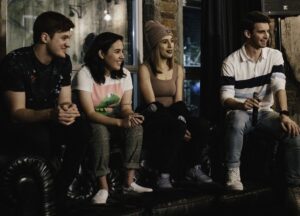 A Canadian YouTuber hosted a panel last Friday wanting to create a safe space for talking about mental health battles and strategies.

Kidney, of Ottawa, Ont., is a mental health activist who has been active on YouTube for five years and gained a following of more than 700,000 subscribers. His videos focus on mental health but also touch on relationships, hardships and life lessons.

About 100 people attended the hour-long panel which featured Kidney having one-on-one conversations about mental health with each of his three panellists.

During the last 15 minutes, there was a question and answer period where all four panellists joined together to interact with the audience. 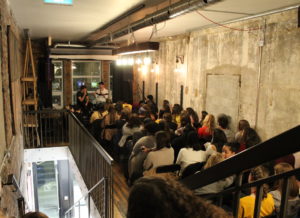 Andrew Quo (left) and Joey Kidney (right) speaking at the Stay You Toronto Panel at Vitaly on Feb. 8. There were about 100 people in the audience. (Stefanie Ucci)

Kidney took questions from audience members before the panel and read them out to each guest in order to have a unique conversation about mental health with each person.

The first panelist was Andrew Quo, 25, a YouTuber from Toronto, who has been active for seven years and has 370,000 subscribers.

Quo discussed relationships from a male perspective and how they have changed with the increase of social media and online dating use.

In an effort to decrease the stigma around certain topics, Kidney asked Quo to answer a question about talking to partners about STD testing.

“I think you shouldn’t be weird about it, you can say ‘hey, I’m going to get tested. You should too,’” Quo said.

Both Quo and Kidney agreed this is one area that isn’t talked about enough and contributes to anxiety and fear around dating.

Kidney’s second panelist was Kalyn Nicholson, 24, a health and wellness activist from Toronto, who has been on YouTube for just over a year and has almost 1.5 million subscribers.

Nicholson openly talked about her battles with anxiety and shared advice and insight into how she uses yoga and meditation to deal with it.

“The thing about yoga is it makes you kind of slow down and be in tune with your body in the moment so it’s almost impossible to be anxious,” Nicholson said. 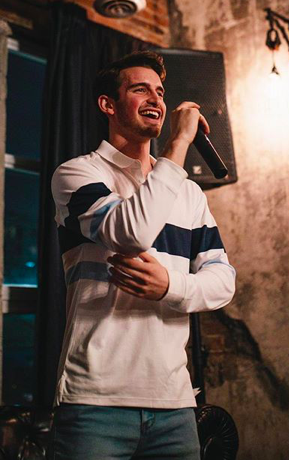 Joey Kidney speaking to the audience at the Stay You Toronto Panel at Vitaly on Feb. 8. (Emily DiRenzo/emilydirenzo.com)

Kidney said mental health is very often invisible and is consequently seen as less important than physical health by many people.

“I almost question if people think it’s less important or if it’s just uncomfortable because physical health is something you can actually look at,” Nicholson said.

Kidney’s last guest was Elle Mills, 20, has been posting videos for four years. She has 1.6 million subscribers and has shared a large portion of her life on the internet.

Kidney addressed the busy year Mills had and asked her about her video from May 2018 called Burnt Out At 19 where she shared her struggles with overworking herself.

“I do think there were a lot of positives that came out of it but I think burn out was just the word for exhaustion,” Mills said. “I was overworking myself and it got to the point where I had a breakdown and that made me realize that it’s okay for me to slow down, it’s not a race or a marathon.”

Mills said she chose to make her breakdown public because she finds it easier to share her issues online.

Kidney asked Mills: “where do you draw the line between being selfish and focusing on yourself for your own mental health issues?”

“There isn’t a line because if it’s for your mental health, it’s not selfish,” Mills responded.

Kidney is very open with his mental health issues and shared with the audience that he battles anxiety, depression, and ADHD.

His most successful YouTube video addressing mental health is called I filmed my anxiety attacks for a week which has more than three million views and almost 14,000 supportive comments.

Kidney offered advice to the audience to stop as often as necessary and slow down when you need to in order to assess your situation.

“When it comes to school, your friends, or the thing you feel like you can’t handle, the number one thing I think you should ask yourself is, ‘what’s the rush?’” Kidney asked.