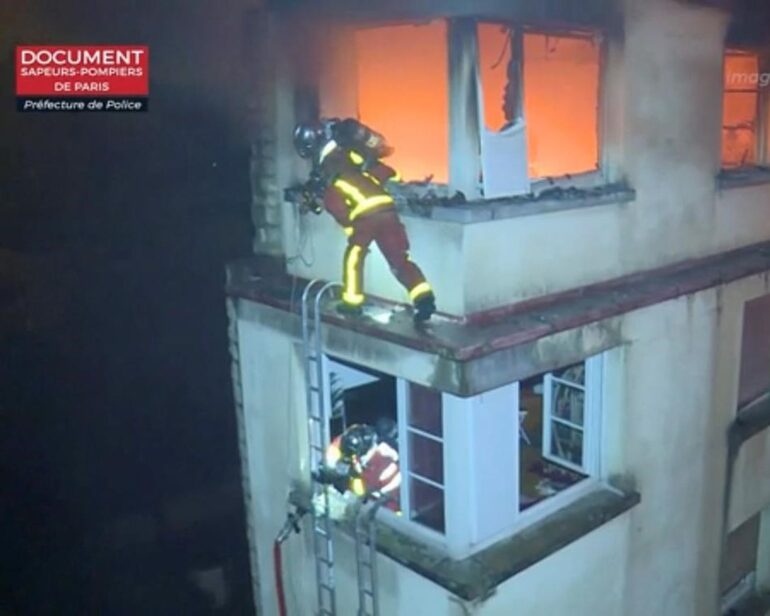 A 40-year old woman has been arrested on suspicion of starting a fire that led to the deaths of ten people including a baby in Paris this morning.

Thirty residents of the eight story building and eight firefighters were injured with one left in critical condition.

Police have arrested a 40-year old woman in connection with the fire in the southwest of the city in the 16th arrondissement.  Officials said that she has had a history of psychiatric problems and was drunk when apprehended. Shortly after her arrest she was transferred into a psychiatric unit.

Alleged female arsonist said to have started fire in Paris residential block in which eight of her neighbours, including a baby, died today had been “drinking heavily” while arguing with people living in flats near hers, say prosecutors. Now in custody & facing criminal charges.

Multiple neighbors said they heard the suspect and an off-duty firefighter arguing over the woman’s music before the fire broke out, then heard the woman cry out: “So you’re a firefighter? Here’s a fire.”

The blaze began at around 1 a.m. local time on the 2nd floor of the building before engulfing the nearly 50-year-old building.

Nine people including a baby have died in a fire in an eight-storey building in Paris, fire service officials say

Around 250 firefighters were on the scene rescuing tenants from their window sills and rooftop.

Police blocked off the street and evacuated neighboring buildings as firefighters battled the blaze. The flames were eventually extinguished by mid-morning.

The fire comes a month after a deadly explosion linked to a gas leak in a Paris bakery.

It is the deadliest fire in Paris since the April 2005 hotel fire near the capital’s famed old opera house that killed 24 people.