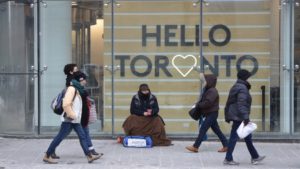 A homeless man in Toronto near Yonge and Bloor streets. (Alireza Naraghi)

A young man clambers out of a concrete crevasse, wrapped up in a worn-out tarp on the busy Yonge Street two blocks north of the Eaton Centre.

“Hello,” the 22-year-old Eric shouts above the noise of the bypassing crowd and traffic. “You’ll be surprised how often I say hello as people flow past me.”

“After a while, you just realize you don’t exist,” he said.

His story could be a snapshot of the youth homelessness crisis in Canada. The figures are stark. On any given night, there are an estimated 6,000 to 7,000 people between 16 and 24 who call the streets home, representing 20 per cent of the total homeless population.

In Toronto, startling figures range from 850 to 2,000, far more than what the city’s youth shelter system can support.

“I was living with my dad who was an alcoholic and was abusive. At various points, he would kick me out for a few weeks every time he snapped or whatever, so I feel safer out here,” Eric said.

The stories of young people ending up on the streets differ, but according to Covenant House, about 80 per cent of the cases are directly connected to family dysfunction, which could include abuse or childhood trauma often stemming from their parents’ struggles with addiction.

“Many of our clients deal with families who may be struggling with issues around poverty or substance use or mental health, and they’re trying to escape those things,” said Louise Smith, associate director at Covenant House Toronto. “Young people don’t go to the streets because they don’t like their 11:00 o’clock curfew. They’re leaving something that’s very intense.”

“Between 25 to 40 per cent of young people who are experiencing homelessness identify as part of LGBTQ community,” Smith said.“ 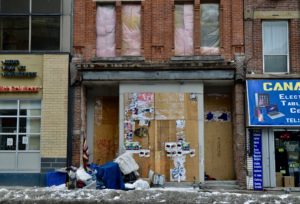 A rundown building on Yonge Street in downtown Toronto, where Eric, a homeless 22-year-old man, has spent the night this past week. (Alireza Naraghi)

According to the 2018 city’s Street Needs Assessment, LGBTQ+ people make up 24 per cent of the youth homeless population. The report indicated they are overrepresented because they often fear rejection or homophobic abuse from family and friends.

Studies show the longer young people stay in shelters, the greater the risk they will stay homeless in the long term.

A sound strategy is focusing on prevention instead of merely responding to the issues as they occur. “We’re really looking at housing and aftercare. We don’t want 100 people staying in our shelter for years and years and years,” Smith notes.

The Ontario Conservative government announced the closure of the independent watchdog’s office late last year. The program had a broad mandate to advocate for children, including those in Indigenous communities, and people with disabilities.

“For 15 years we weren’t seeing things like the investments in supportive housing and shelter beds that we needed under the liberal government. Now things are going from bad to worse under the conservatives,” said MPP Suze Morrison, the NDP’s women’s issues and housing critic from Toronto Centre.

Also, a sustainable strategy must go beyond patching people up and returning them to the streets.

Morrison said shelter beds are a band-aid solution and homelessness is a complex problem with many parts.

“What we need is a supportive housing model where folks who are experiencing homelessness, have access to affordable housing,” she said. “But more importantly they’re given supports in mental health care, addictions care, access to medical services, to help them transition into more permanent housing.”

Covenant House attempts to address all of these issues by offering a multifaceted approach, including employment opportunities through their apprenticeship programs, food and clothing banks, an on-site school. Their downtown facility has 94 crisis shelter beds for the youth and 31 spaces in its transitional housing section.

“The young people whom we work with really need to live in a supportive environment, together with a mentor, or in a staffed environment, while they get back on their feet. Ultimately that’s what we are looking to do,” Smith said.

Eric would love to have a normal life, but if the government does not help him get a roof over his head, he does not know how he can turn the corner.

“If I had a place, it would be a lot easier to turn things around,” he said, suddenly running across the street, after spotting a familiar face.