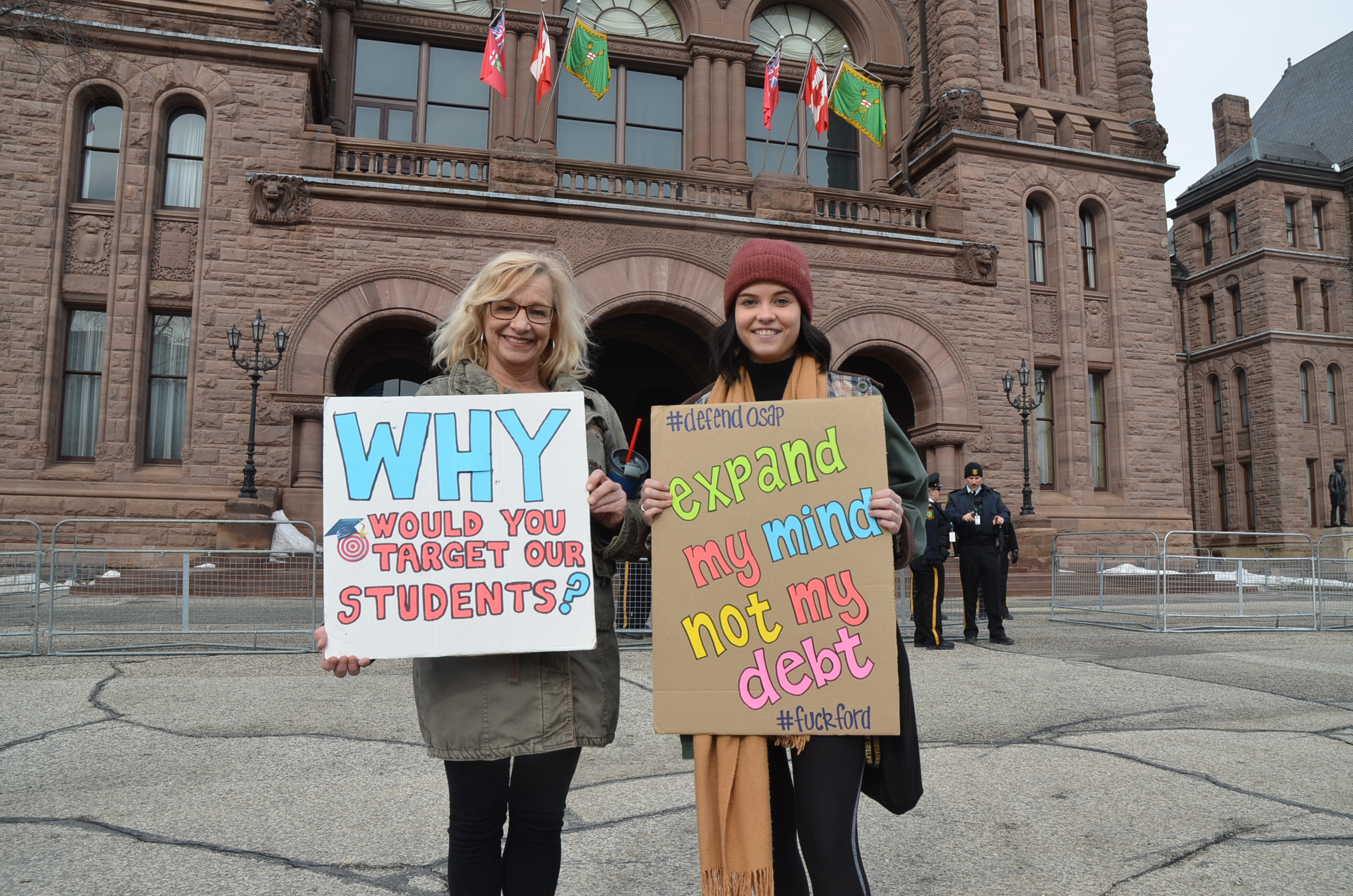 The sound of beating drums could be heard as student organizers in fluorescent orange and yellow vests rallied protestors through the muddy puddles of melted snow on University Avenue in downtown Toronto.

“Whose education? Our education. Whose province? Our province. Whose streets? Our streets,” they chanted as they energetically marched towards Queen’s Park.

Passersby pulled out their cellphones to document the protest, while elementary school students from St. Robert Catholic School lined the sidewalks and chanted to the marchers, “education, education!”

The rally was one of several, held province-wide on Monday afternoon, in protest of the provincial government’s recent cuts to OSAP, including the elimination of the six-month grace period for loan repayment and cutting of the free-tuition program.

The government said the previous funding model was inefficient, claiming students from families with incomes up to $175,000 receiving funding. In lieu of the cuts, Merrilee Fullerton, Minister of Training, Colleges and Universities, announced a 10 per cent province-wide tuition decrease.

The decrease takes effect in September and will apply to all university and college students in Ontario, low-income or not.

Rebecca Bozzato, press secretary and communications advisor to Fullerton, said in an email that the changes “will focus OSAP funding to the students and families with the greatest needs” by increasing grants for low-income students to 82 per cent from 76 per cent.

However, none of these low-income students, or any other student, will continue to attend university entirely based on grants.

And while the number of grants distributed to low-income students will increase, Bozzato did not specify if the amount the students received per grant would be impacted.

Tyler Riches, an 18-year-old first-year student at University of Toronto and speaker at the march, said he was only able to attend university because of the grants he received.

“I am here because of the free tuition program under OSAP. It gave me the security to want to go to school,” he said. 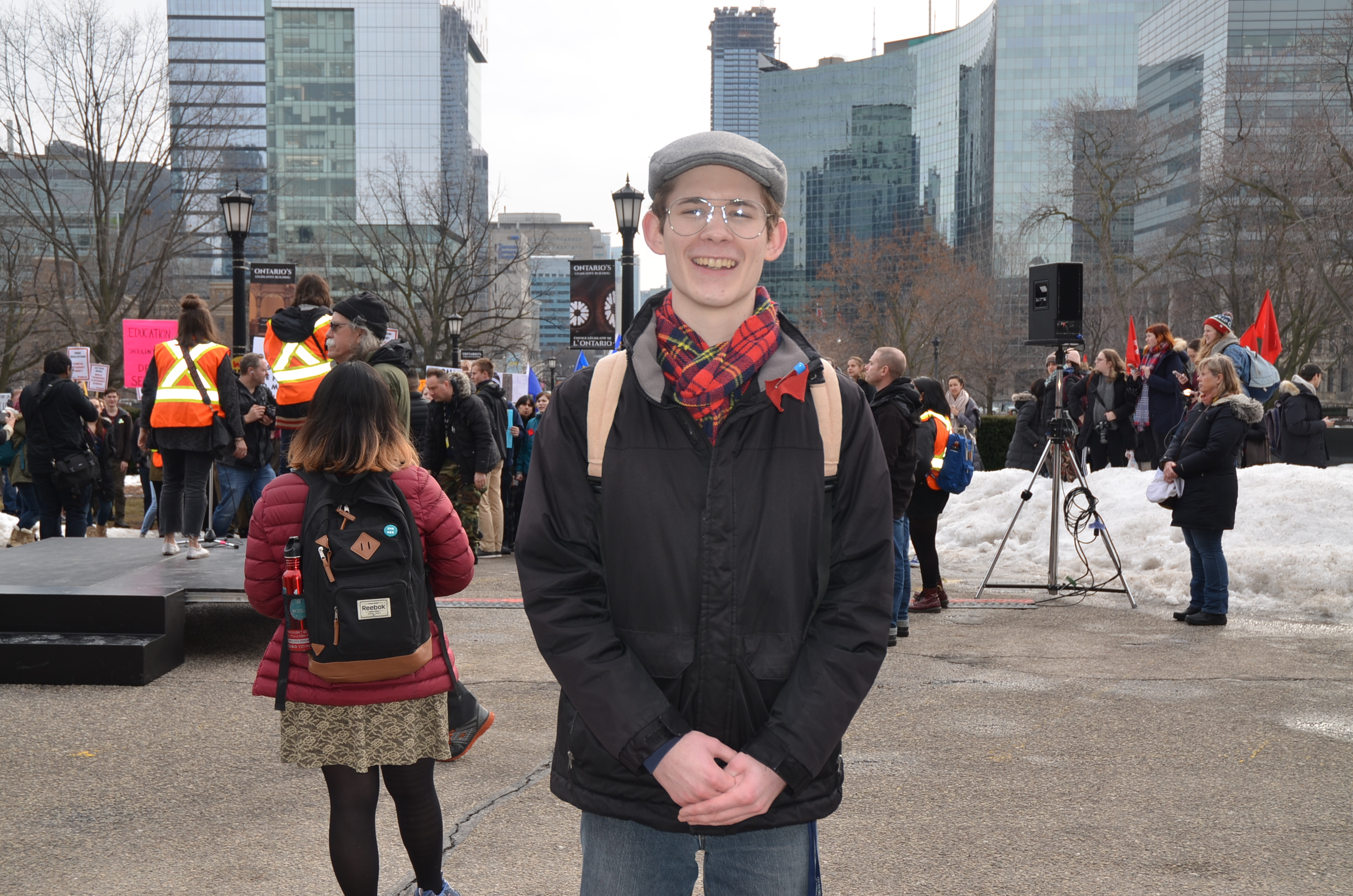 Riches is the president of his residence house, a first-year rep on the collegiate student government and a board director for the U of T Student Union, extracurriculars he’ll likely have to sacrifice in exchange for additional working hours to make ends meet, he said.

Fellow University of Toronto student Aleksei Shkurin said while he wants to think the government has students interests at heart, the facts aren’t supporting that.

“As an international student, one of the reasons I came to Canada, is because I saw in Canada a country that has all the foundations for building a civil society, including accessible education,” he said. 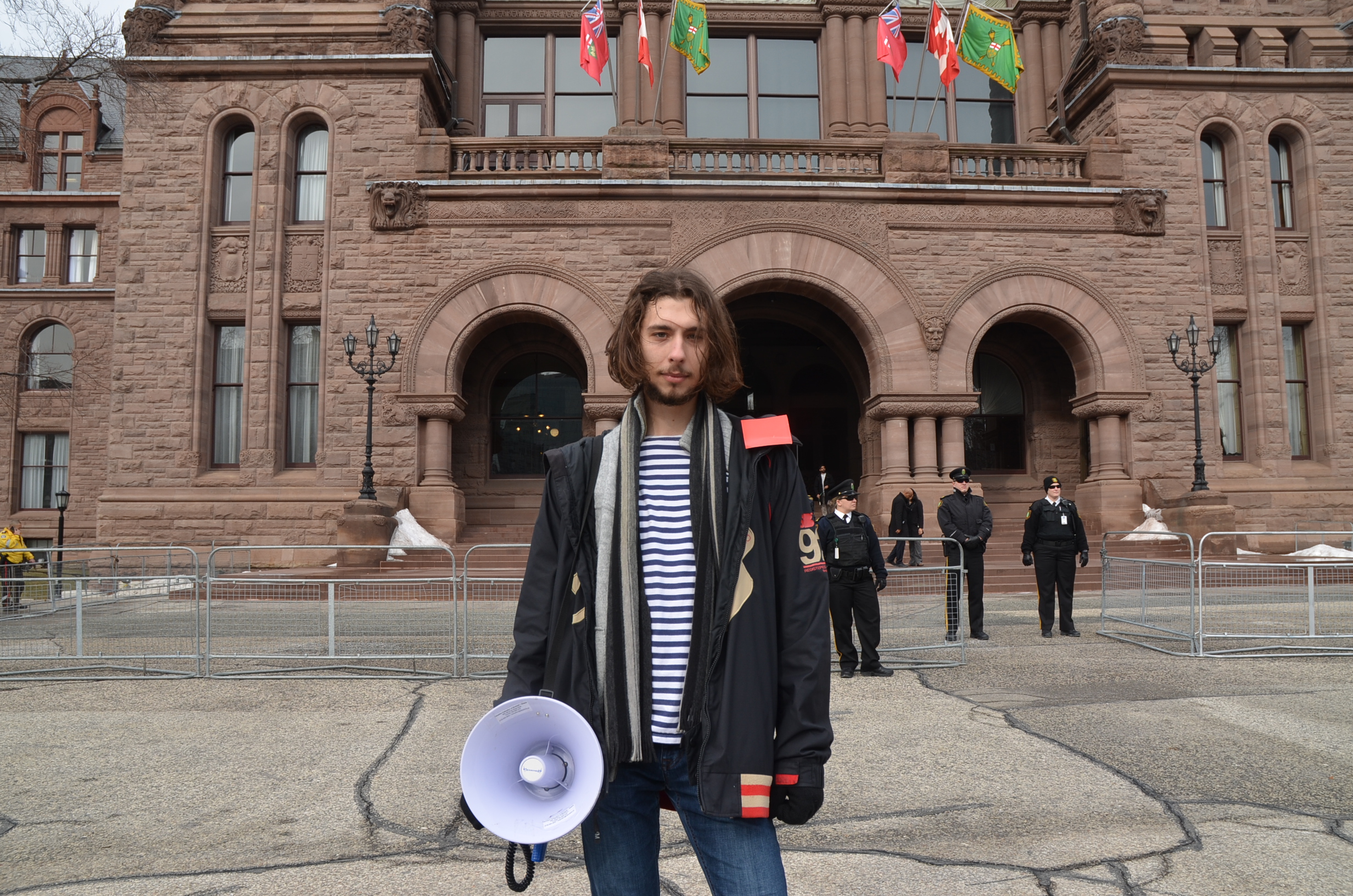 Aleksei Shkurin, a 25-year-old international graduate student at University of Toronto, standing with the megaphone he used to rally the crowd as they marched up University Avenue. (Caitrin Hodson)

As a graduate student, he receives a stipend which he says “basically puts me right on the poverty line.”

“I would prefer students to focus on their studies instead of focusing on money to be able to afford their studies,” he said.

Faisal Hassan, NDP MPP of York-South Weston, sympathizes with students financial struggles as it took him 10 years to pay off his student loan.

He said the Ford government is out of touch and not representing the interests of the people of Ontario.

“He’s actually targeting the most vulnerable members of our communities, the working class, the middle class, where a university and college education is an opportunity,” Hassan said. 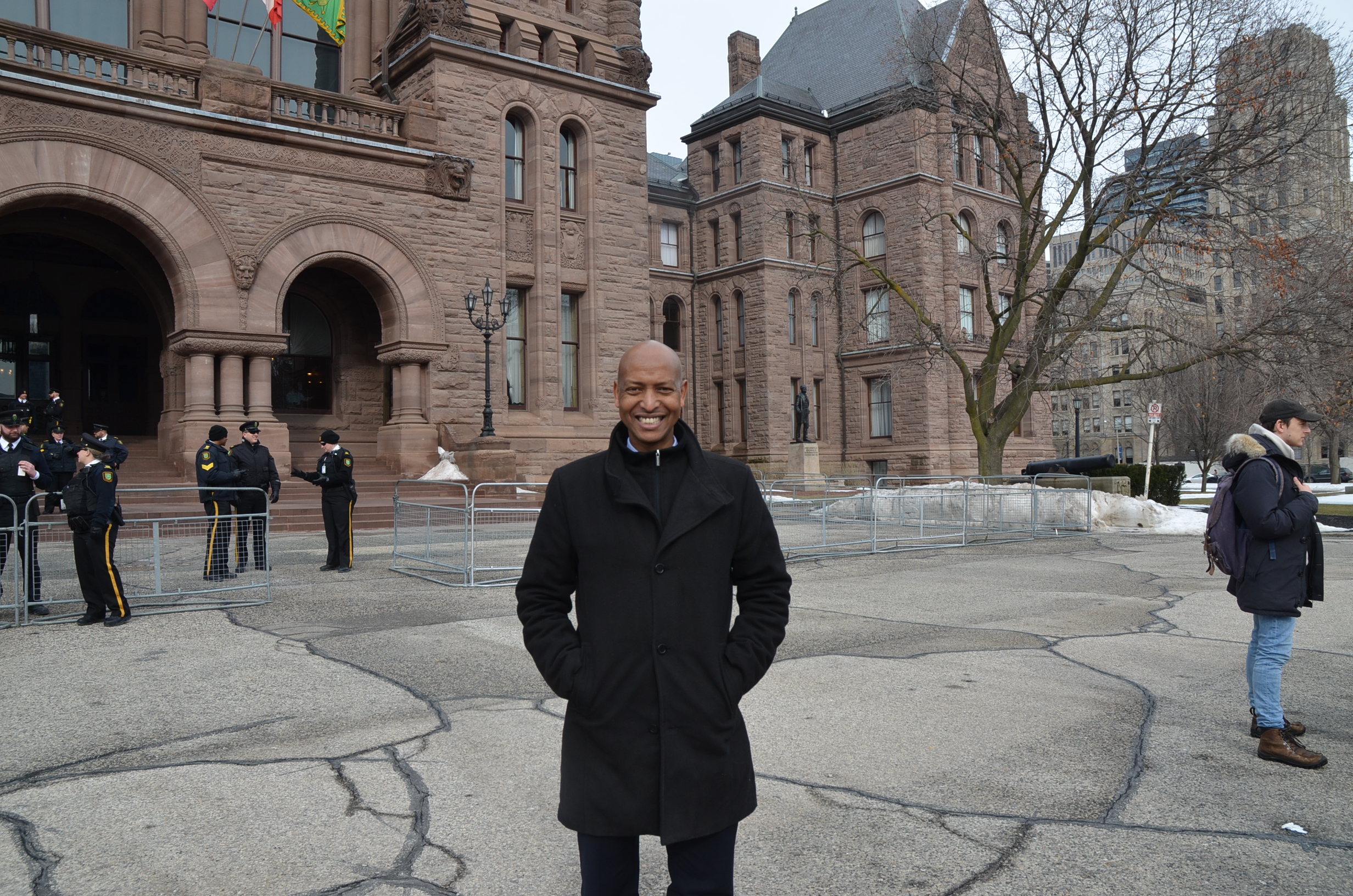 “Let’s be very clear here today, students Mr. Ford are not inefficiencies, access to quality education, regardless of economic background is not an inefficiency,” she shouted to the crowd.

Akmal said while the tuition cut the Ford government “prides itself on so dearly” sounds nice, essential services will be cut as a result.

Bozzato’s email said the tuition cut aims to empower students to choose where they put their money: “The fee structure will provide students with the freedom and flexibility to pay only for experiences and services that they use and value.”

But Akmal said students weren’t consulted on what services they value or don’t value.

Taking direct issue with the minister, Akmal said Fullerton refuses to name the student groups that she allegedly consulted before making the cuts.

The minister’s office, however, said the government reached out to people across the province.

“During the last election and ever since, our government has heard from and spoken with students, teachers, administrators and parents from across Ontario,” the office said in a prepared statement. “We’ve consistently heard loud and clear that tuition was too high. People want post-secondary education to be affordable and accessible – while ensuring that the OSAP program itself remains sustainable for future generations of students.”

But for many students the future is uncertain, with potential debt and financial struggle top of mind.

“You are not for the students, so stop acting like you are,” Akmal said from the podium at Queen’s Park.