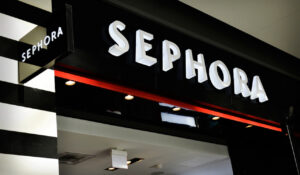 A Sephora store in Toronto. The company recently received multiple customer complaints after a coupon offering a massive discount was deemed unauthorized. (Flickr/bargainmoose)

Sephora recently came under fire when an online coupon for an astounding amount of savings was deemed “unauthorized” and all orders using the promotion were canceled.

The code offered $88 off a $100 purchase and was only valid for a few hours before it got caught but many people managed to place orders in that time.

Representatives on Sephora’s Twitter sent out tweets Feb. 15 saying the code was “posted on non-Sephora channels” and was therefore unapproved by Sephora. They said they were not honouring it and canceled all orders.

According to Sephora’s website, the coupon was part of the “Lunar New Year Lucky Red Envelope Promotion.” The contest was for Canadian residents to run from Jan. 14 to Feb. 28 but was shut down early.

Customers who placed orders or made purchases in store worth $88 or more received a red envelope that had either a coupon prize, grand prize, or no prize.

Only 100 winning envelopes containing the promotion code “88OFF” were available and the same code was used for every winner. Sephora allegedly made the technical mistake of giving the code unlimited uses so once customers caught on to that, it circulated on social media and by word of mouth.

The exact value of orders that went through using the code is unknown but based on the number of tweets in the #88OFF Twitter thread, the number is likely in the hundreds.

Sephora offers semi-annual sales for its customers in the form of 15 to 20 per cent off any purchase. The $88 off $100 promotion is more than five times the value of a regular coupon which made many loyal customers jump on the opportunity.

Toronto corporate lawyer Natalie Dolce, of My Daily Sweet on YouTube, posted a video immediately following the incident, arguing when customers make purchases from a company, they enter into a binding contract.

“A consumer’s first course of action, if they believe they have been wronged legally, should always be to seek independent legal advice,” Dolce said in an interview with Humber News.

However, in her video, Dolce indicated Sephora’s terms and conditions prohibit class-action lawsuits against the company. This means that an individual can take action on behalf of themselves, but she cautioned that anything involving a lawyer will cost more than it’s worth.

From an ethical and public relations point of view, Dolce said Sephora was right for discontinuing the code once they discovered it. However, she said it would have made sense to honour the promotion for those who did place orders.

Humber News reached out to Sephora for a comment but they did not respond. The company has not made an official statement to the public and hasn’t mentioned it on their Twitter account since Feb. 16.

Lina Khandaker, 21, of Toronto, took to Twitter to express her anger and disappointment in the company over the issue.

She said she didn’t get to place an order using the promotion because it expired before she got the chance to. Many customers faced the same situation which caused a different feeling of frustration.

“It was just super disrespectful and lacking in their customer service department,” Khandaker said. “I feel that they should’ve put out a statement apologizing and explaining the whole thing.”

Sephora literally used the SAME code for the winners of the contest…there’s only supposed to be 100 of them. Like you didn’t think they were going to tell their friends? This is entirely their own mistakes #Sephora #88off @sephora

Many of the people who rightfully won the coupon said on Twitter they either didn’t get to use the coupon or their orders were canceled.

Teighan Morris, 19, of Woodstock, Ont., was one of the many angry customers who had her order canceled.

Morris said she found out about the promotion through her friends but didn’t see it advertised on Sephora’s website or social media accounts.

She said she managed to place an order for three products using the promotion and received a normal confirmation email that acknowledged her use of the coupon.

Morris said she recently received a computer automated email asking her to review products that she never received.

According to tweets in the #88OFF thread, some people’s orders showed up at their doors days later. This additional mistake by Sephora made them one of the lucky ones.

what a rollercoaster this has been but thanks @sephora, i got my order 🤷🏻‍♀️ #88off pic.twitter.com/9QlZvfb3z0

Both Morris and Khandaker said Sephora will no longer be their go-to for makeup and beauty products.