Pressure mounts for Venezuela’s president to step down 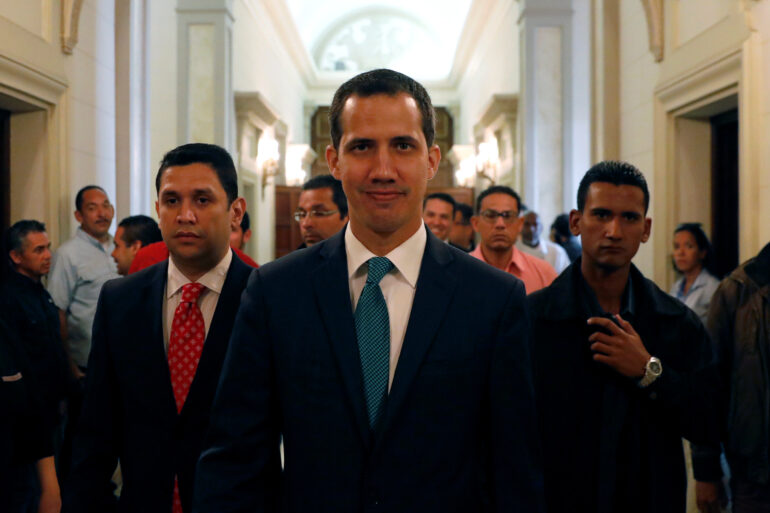 Venezuelan opposition leader Juan Guaido in the National Assembly before a news conference in Caracas, Venezuela, on Feb. 4. (REUTERS/Manaure Quintero)

This comes after Nicolas Maduro, Venezuela’s president, didn’t comply with demands by Spain, France, Germany and Britain to call for presidential elections.

Pedro Sanchez, Spain’s Prime Minister, said they are working to re-establish a full democracy in Venezuela.

“I don’t accept ultimatums from anybody,” Maduro warned on live TV.

Juan Guaido, the interim president of Venezuela until democratic elections can be guaranteed, thanked the EU nations for supporting Venezuela’s plight for democracy via twitter.

This course of action is dictated by the Venezuelan constitution when a president is deemed illegitimate.

Joanna Hausmann, an American-Venezuelan writer and actress, said Guaido didn’t just declare himself a president out of nowhere.

“He was elected by the Venezuelan people to represent the people at the National Assembly,” she said.

In 2017 the Supreme Court that was hand-picked by Nicolas Maduro nullified the National Assembly.

The Supreme Court then called for a new Congress to be organized.

“The National Assembly was chosen in elections and by a vote by the Venezuelan population and it was the only government institution that was run by an opposition majority that remained active in Venezuela,” Hausmann said.

This new Congress immediately called for presidential elections, which took place last year on May. 20.

Haussman said during this election the most popular opposition candidates were either jailed, exiled or banned from running. There was no legitimate way for the opposition to take part in the elections.

According to Meganalisis, only 17.32 per cent of the population registered in the national electoral system voted.

The NGO Venezuelan Observatory of Social Conflictivity reported around 850 people have been jailed and 35 killed during protests against Maduro’s government between Jan. 11 and Jan. 28.

More recent polls from Meganalisis show that more than 80 per cent of the Venezuelans disapprove of Maduro’s government.

The United States and other nations have offered to help Venezuela deal with its current humanitarian crisis by attempting to send medical supplies and food.

Maduro’s government hasn’t accepted the help and refuses to acknowledge a crisis is taking place.

“We are not beggars,” said Maduro on national television.

Haussman said there is such a shortage of medical supplies that people are dying of what were eradicated diseases.

According to data from the International Money Fund (IMF) the total accumulated inflation in Venezuela hit the 1.7 per cent million mark in 2018.

The IMF also predicts inflation for 2019 in Venezuela reach 10 million per cent at the end of the fiscal year.

The United Nations has predicted that by the end of 2019 around five million Venezuelans will have fled the country, more than 10 per cent of the country’s total population.