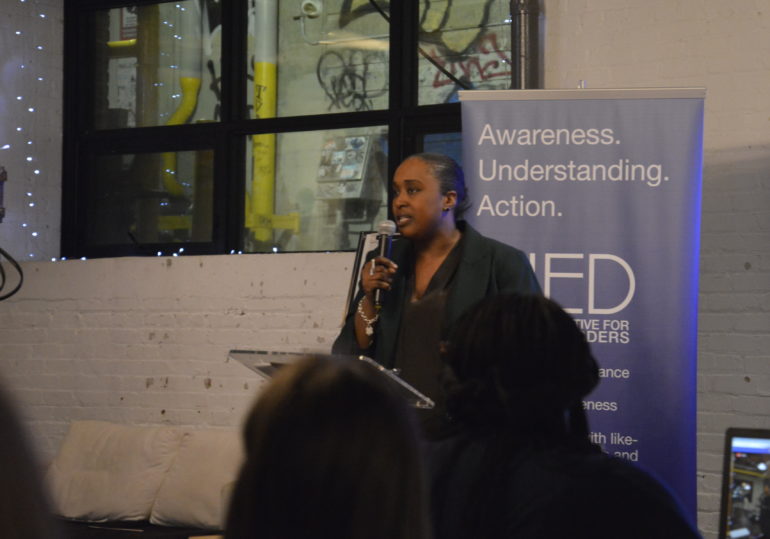 NDP MPP Jill Andrew talks about her own struggles with body image at an event on eating disorders in Toronto on Feb. 11, 2019. (Ryan Glaysher)

Jill Andrew, the NDP MPP for Toronto-St Paul’s, spoke of her own personal struggles with eating disorders at an event in Toronto on Feb. 11.

The event was hosted by the non-profit National Initiative for Eating Disorders at the Centre for Social Innovation on Spadina Avenue.

The featured speakers of the event shared their personal struggles and strategies for combating poor body image and serious eating disorders such as obesity and anorexia nervosa.

In front of a packed room of 50 people, Andrew spoke of how her “disordered eating” emerged after experiencing health attacks such as chronic bowel obstructions.

“Sometimes I’m afraid of food because I just never know when it’s going to impact me in a negative way which could cause me to be hospitalized,” she said.

Andrew said she did “plenty of work even before I was elected” on issues of body confidence and body equity.

She started Body Confidence Canada with her partner Aisha Fairclough, an advocacy group whose mission is to “champion, challenge and demand body equity.”

Andrew said one of the challenges of achieving body equity is a bias for certain body types over others.

“The images we are being fed daily through all sorts of mediums suggest a certain body type, image or shape be exalted over another,” she said.

Andrew was also at Monday’s event to get some personal political business of her own done.

She passed around a petition for people to sign for her own private member’s Bill 61, which would recognize the first week of February as Eating Disorders Week in Ontario. 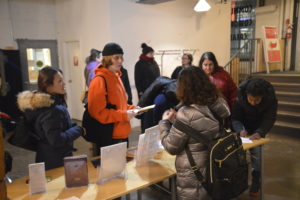 Attendees at event on Eating Disorders received free informative pamphlets at the Centre for Social Innovation in Toronto on Feb. 11, 2019. (Ryan Glaysher)

The recognition of an eating disorders week was only a beginning to start people talking about “prevention, intervention, education and awareness,” Andrew said.

One million people suffer from eating disorders in Canada with “almost half those numbers right here in Ontario,” Andrew said.

Brochures handed out at the event by the National Initiative for Eating Disorders said eating disorders claim the highest death rate of any mental illness, 1 in 10 people.

Other speakers at the event focused on what could be done to try and stop poor body image and eating disorders from developing early-on in children.

“More than half of children report being involved in appearance based bullying,” said Suzanne Phillips, a co-founder of Beyond Images.

She said feedback from teachers who have used the curriculum on the website suggests it has “enhanced their students’ ability to think more critically about media messages.”

Teachers are also “more confident about addressing body image issues in the classroom” after using her organization’s website, Phillips said.