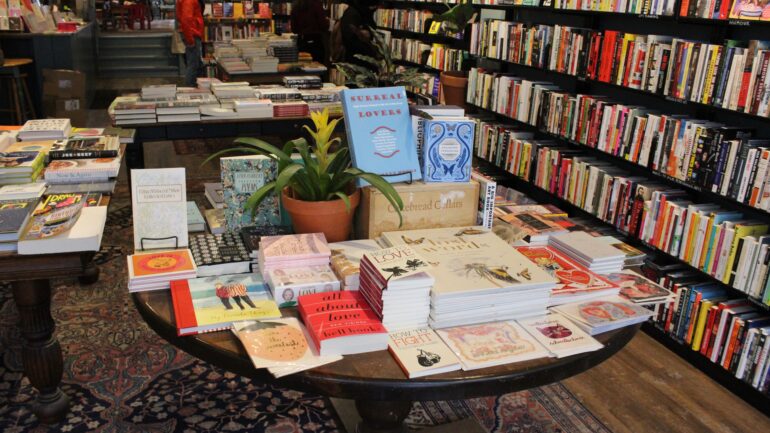 A sign on the bookshelves in the classic hardbacks section says the tarot cards are kept at the checkout counter.

People kept on stealing them, explained Alex Snider, co-owner of Queen Books, so they had to keep them somewhere conspicuous.

Snider wondered whether that would bring on bad karma — stealing something often used for prognostication.

Queen Books is turning two this April, and amid stories of independent bookstores shutting their doors for good, Snider is optimistic about the store’s future.

“We’ve been really fortunate because it’s been pretty smooth so far,” Snider said. “The community’s really embraced us.”

The ceilings are corniced and engraved, reminiscent of British renaissance plasterwork, and the walls, peeping through bookshelves and children’s artwork, reveals teal wallpaper.

Since then, the store has become an integral part of Leslieville — with speakers blaring 102.1 The Edge when it’s warm out, welcomes dogs and is right next to Ed’s Real Scoop

“We have a lot of regular customers already,” Snider said. Leslieville residents and people from the larger book community in Toronto visit often.

A bookstore was always a dream for Snider, but it never seemed possible. For her friend and business partner Burns, however, a store like Queen Books was the goal.

“When she was little her family moved to Vancouver,” Snider said of Burns. Burns was around eight years old and “struggled to fit in as a new kid.”

“It was a refuge for her, this children’s book store,” Snider said.

The store’s back end is almost an homage to Burns’s childhood: it’s a colourful haven for children, whose Crayola artwork decorates the wall stretching up to the front desk. 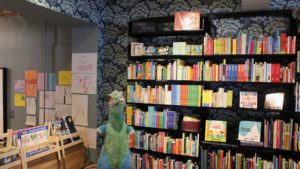 The section in the back of the store is for children and hosts readings and events specifically for Leslieville kids throughout the year. (Alisha Mughal)

The comprehensive collection is curated especially for Leslieville.

“Nobody else is going to be able to know our neighbourhood as well as we do,” Snider said. The events the store hosts are a testament to this kinship.

The events are personalized and “an important experience that an indie can provide,” she said.

Amazon, then, is not the competition, because the service Queen Books is providing is not anything that Amazon would ever want to attain to, Snider said.

If Amazon delivers books fast and anonymously, then Queen Books invites the customer to meander, say hello, touch the covers, smell the pages, to stay a while — adults and children alike.

But Amazon is not bad either.

“There’s a lot of communities that are underserved that don’t have an indie store,” Snider said. Amazon is fulfilling a service in more isolated communities, and that’s okay, too, she said.

The narrative surrounding bookstores needs to change, Snider said — both the narrative of obsolescence and of floundering in face of chain stores.

“I find that lots of young people are reading,” she said.

“Books are such an important tactile experience,” Snider said. “It’s a really important part of our days to be able to put the phone down and put the computer down and just step away and read a book. And if you love to read then I think that reading a book is a really important break from technology.”

The idea that people don’t want to read is false, she said.

“Independent bookstores are, for the first time in years, in a stronger place than they have been,” Snider said. Problems faced by small bookstores were not caused by low sales and they had to close. It was not that people were not buying books.

Independent stores are not being made obsolete by big box stores.

The problem is high property taxes and rent. It is “the biggest problem,” Snider said. It’s not just a problem for independent bookstores, but for every small business owner, homeowner and resident of Toronto.

“Rents are really brutal, and that’s something that needs to be addressed for everyone, especially in Toronto,” she said.

People will never stop buying books, Snider said as country singer’s Kacey Musgraves’ twang skipped through the air that smelled subtly sweet, that of so many sheets of paper pressed together in books.

Queen Books won’t host a birthday party exactly. Instead, the store will host much the same event it hosted for its first birthday: a thank-you party.

There will be giveaways, authors will come in. It will be a celebration of the community that so easily and swiftly wrapped itself around the colourful store with its lush Persian rugs and wooden tables piled high with books.

This bookstore that people come to because it gives them what they want is here to stay.

Queen Books’ second birthday is in April, but the party will be held in August — steadfast and well into the future.