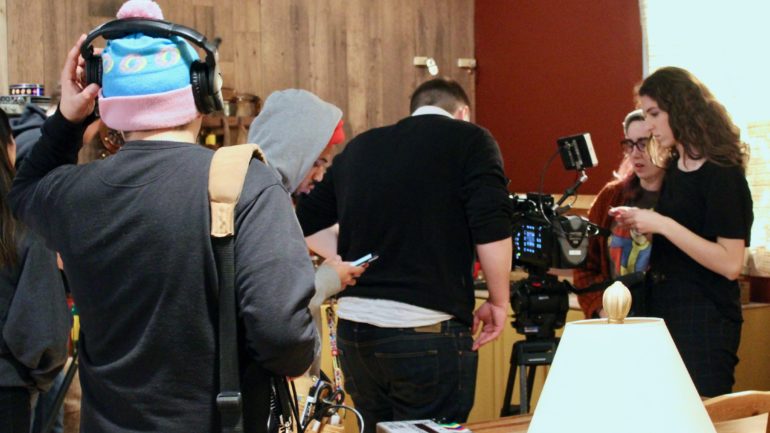 Second-year Film and Television Production students work on the short film, Boyfriend Season at Humber College. All the films produced in the winter term will premiere at The Royal on College Street in Toronto’s Little Italy on April 24. (Alisha Mughal)

Lowe, realizing what she’d done, put her fist to her mouth and turned away from the Rube Goldberg machine they were filming, cursing at herself silently.

“That’s my bad,” she said after Gionfriddo yelled, “Cut.”

Humber Film and Television Production’s advanced diploma students, already a week into the production of their short drama films on Feb. 13, worked smoothly and comfortably around each other, as though they’d been doing it all their lives, and as such, knew each their importance.

Humber had closed its North campus the day before on Feb. 12 because of a snowstorm, but the students working on Boyfriend Season still came in.

There are seven productions to be filmed in the winter term, and Boyfriend Season was the second.

Each production is allotted a day and a half to build its set, which the students build from scratch, Olivia Collinson, a daily grip for Boyfriend Season, said. After the set is built, each production has two and a half days to film, she said.

Collinson will be a data management technician for her main studio drama to be filmed the week of Feb. 17.

A data management technician is Collinson’s key role. She will need to take the film from the camera, make a verified backup of it, organize the files, and then deliver it safely to the editor, she said.

When a student is not performing a key role, they become a daily — a person who does various tasks on set — for another production, or they play a non-key role, she said.

The students, for the most part, produce each film on their own, and their instructors pass through periodically. This is how they get graded, Gionfriddo said.

The students did not have all the time in the world to work with, but Boyfriend Season’s set, the interior of a small cabin, suggested otherwise. 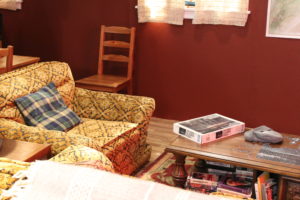 The cabin setting for Boyfriend Season was built in a day and a half by the advanced diploma students. (Alisha Mughal)

Yellow light streaming through sand-coloured delicate curtains like cheesecloths made the small cabin golden, as though it was aglow in the first light of the day.

This was the work of the director of photography, Nick D’Intino.

Mitsy Koolie was the art director for Boyfriend Season, and Alex Diaz was production designer.

Stepping onto the linoleum floor of the cabin, it was easy to forget it was actually tucked away in the basement of the “L” building, and that the set had been built in a day and a half.

The cabin looked lived-in, strewn about with the detritus of a leisurely weekend: a half-finished puzzle scattered atop the coffee table, cassette tapes and books piled messily beneath, various instruments to pass the time cluttered in wooden crates in corners.

“This’ll get torn down tomorrow, and a whole other set will go up. We do this seven times,” O’Brien-Sokic said.

D’Intino worked to replicate the morning light for the cabin. “I lit it,” he said.

The students handpicked every piece that decorated the set — they rented it, used prop houses, or film suppliers, O’Brien-Sokic said.

Andrew Ko drove a truck to get the furniture to Boyfriend Season’s set. For this school production, Ko’s role as a producer was more hands-on. 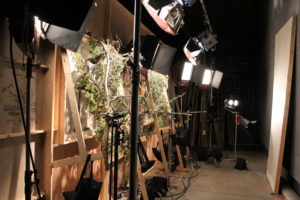 Artificial light filtered through real branches created a morning glow inside of the cabin of the short dramatic film, Boyfriend Season. (Alisha Mughal)

“Get the film made, at whatever cost,” he said. Ko sees the producer’s role as that of a CEO: organize everyone on set, “budget the film, allocate resources, make sure the departments are talking to each other,” and get everyone what they need to get the job done.

Ko moved through the set and the surrounding space — littered with boxes full of tin cans peeled of their outer labels, small wicker baskets, and sturdy pots and pans — making sure everyone was doing their job, helping where he was needed.

Koolie sat working on a makeshift gun that one of the characters in the film would use. The gun’s barrel was tin cans, and two pairs of tongs served as two grips, and all of it was bandaged with green and red bungee cords.

“We come up with the designs,” Diaz said, the director gives suggestions, and if the director doesn’t like it, “then we scrap it.” 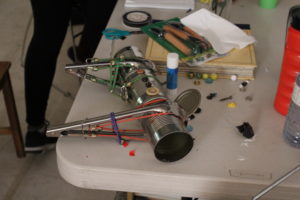 The advanced diploma students learn to build their own sets as part of the program. (Alisha Mughal)

“I need you to like get people,” Lowe said to Gionfriddo before the first shot of the day.

They were to film a Rube Goldberg machine set in one corner of the cabin and built by one of the students.

To the untrained eye, it looked as though the machine was being difficult, not delivering the shots the director wanted.

But they were just getting various angles, Gionfriddo said.

The hum of the busy students’ voices bracketed the pockets of silence after Gionfriddo yelled, “Quiet on set.” And when it was quiet, the air became tense, as though everyone was holding their breath.

All the work taking place on the periphery of the set would stop, and then pick back up again when they’d stop rolling.

“Not happy about that,” D’Intino said when asked about the 2019 Oscars’ move early the week of Feb. 10, a move that has since been reversed, to present awards for cinematography and editing during a commercial break.

“I feel like everyone should get recognized for their talent and for their skills in front of a mass audience,” he said.

“These people,” D’Intino said, gesturing with a sweeping hand toward the students huddled around the camera, at the students working on props, “work just as hard as everyone else.”