Published On February 10, 2019 | By terrencebishundayal | News 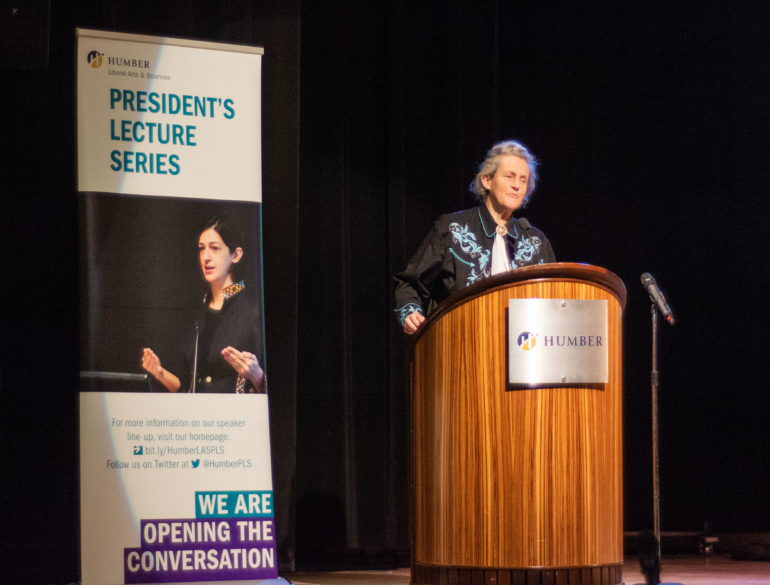 Dr. Temple Grandin was the guest speaker for the newest edition of the President’s Lecture Series on Feb. 7 at Humber Lakeshore.

Grandin is an autism self-advocate and a professor of animal science at the Colorado State University.

She is one of the first individuals on the autism spectrum to publicly share their personal experience. She also  invented the “hug box,” a deep-pressure device designed to calm hypersensitive persons, including people with autism. Her work on more humane slaughterhouse practices has had wide impact across the meatpacking industry.

“As a person with autism, I am a visual thinker,”  said Grandin, who has been named a Time magazine 100 most influential person and was the subject of an HBO bio-pic.

When you understand how different minds think, people are able to work as a team, Grandin said.

People often don’t understand each other because they are unaware of how someone’s else’s mind processes information, she said.

When the airplane was invented, its inventors said it wouldn’t be used for war, but that statement was incorrect. Grandin said that’s why we need visual thinkers and other kinds of thinkers who identify problems.

“A lot of grandparents find out they were dyslexic, they were autistic when their kids are diagnosed, however, they have decent jobs,” Grandin said.

She said she had wood-working classes in elementary school which were practical because they were hands-on and students learned from their mistakes.

“Kids like to do real things. We need to be getting hands-on classes back into schools,” she said.

Grandin once visited a kindergarten class, she said, where kids were using glue guns to make robots out of broken phones and computer parts. The children were only five years old.

She once met someone who had been taught many theories about professional drawing, she said, but their drawings had many mistakes.

Grandin said she found out the student, who was taking classes at a community college, never had the opportunity to draw by hand. 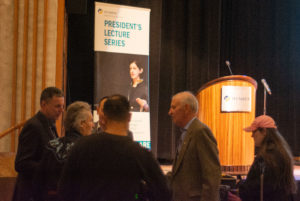 Grandin said visual thinkers like herself put things into categories. For example, if someone says a class is difficult for them, she would find the statement too broad.

“To expand upon the scenario, I will narrow down the details and ask, what specifically is difficult, is it the teacher’s learning style, what type of thinker are you, how do you learn the best and what is the subject being taught. This is to make sure I understand their point of view,” Grandin said.

Kids might be better at learning math if it was more hands-on, Grandin suggested, saying visual thinkers like herself were often screened out.

“There is a database of Google pictures. Search ‘Sean Penrose tiling.’ When you use the visual function, you find so many cool websites. How about patterns of nature? Easy to find online,” Grandin said.