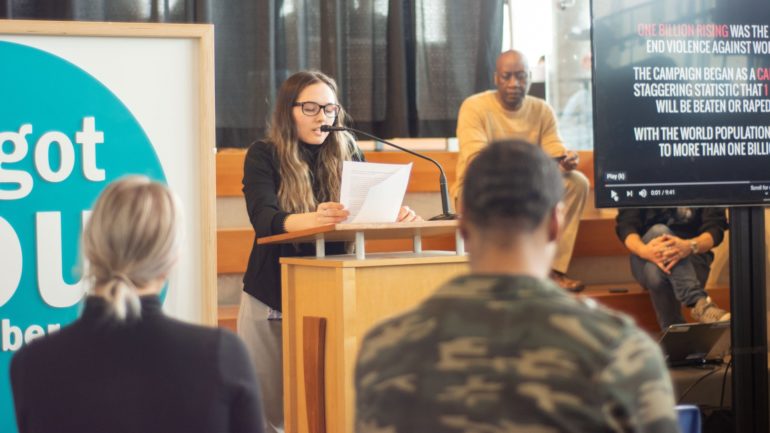 Jennifer Flood, Sexual Violence Prevention and Education coordinator at Humber College, said the first draft of the framework which will guide post-secondary institutions in Canada on preventing and tackling sexual violence at their campuses is slated to be released this spring. (Terrence Bishundayal)

Post-secondary institutions in Canada will soon have a framework to guide them in tackling and preventing sexual violence among their students, said Jennifer Flood, Sexual Violence Prevention and Education coordinator at Humber College.

Flood, who is also a member of the federal advisory committee tasked to come up with the draft of the framework, said the guidelines are being framed by keeping the survivor in the centre.

“Is it going to re-victimize someone if they report and have to go through this huge proceeding and are constantly questioned about their sexual history about what they did, what they were wearing? This is what we are looking at,” Flood said.

However, she said having conversations that include men and people of marginalized communities is “extremely important.”

“One in every six men is a sexual assault survivor,” she said. “It is important to make them a part of this discussion. Also, we shouldn’t fail to see sexual assault through the Indigenous lens. Decolonizing the issue and tackling it for what it is, is the need of the hour.”

The first draft of the committee’s five-year plan is slated to be released this spring, Flood said.

She said the committee will also recommend the government to provide institutions with more resources for sexual assault prevention and education programs.

“We need a lot more resources and a lot more staffing. The college has been supportive but we need more government funding,” she said.

The federal advisory committee, formed in January, held its inaugural meeting on Jan. 16 and 17 in Montreal.

The committee consists of several professors, case managers, councilors, intervention specialists and board members of various student organizations. The framework is going to be a five-year-plan, Flood said.

Nitin Deckha, a Police and Society professor at the University of Guelph-Humber, said knowing the right way to discuss sensitive issues with students hasn’t been laid out in the past.

“I wish to see a standardized procedure which could hand out ways to teach students about consent from this committee,” he said.

After the first draft is released, the committee would consult students, staff members, and frontline workers and gather feedback to prepare their final draft, Flood said.

She has also been coordinating several sex-education programs, such as bystander interventions and programs about consensual sex. She has also coordinated several sexual assault survivor marches.

These programs have shown her the willingness among students to raise such issues, she said. Flood said she is impressed with their knowledge about their consent.

“Students here know a lot more than what is expected of a student,” she said.