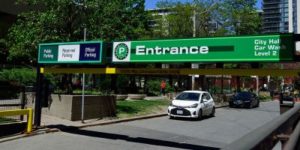 One of Green P’s many parking lots across the city affected by the fare hike. (Toronto Parking Authoritiy)

Torontonians are taking a hike at Green P lots as of today.

People who park at municipal government lots in the city can expect to shell out more cash as of Monday.

Parking will cost 25 cents per more per half hour and 50 cents each hour.

However, residential parking will remain the same until 2020 according to a CBC article.

Jacob Celoi, a Humber student who drives to school said, “Considering that it is really hard to get a parking pass because they have been selling out like crazy and finding parking alone is brutal, to have them increase the prices on top of all this seems ridiculous to me.”

Celoi said he would have agreed with the price hike if it was justified but with Toronto’s limited parking already being a problem, he just can’t.

Student Nick Mash said he does not drive regularly.

“I can see why other people would be affected, but as for me I really don’t care whether the prices goes up or down.” Mash said.

According to another CBC article, Toronto comes in second to last in a survey of eight North American cities.

Humber News reached out to Toronto Parking Authority, but they were unavailable for comment.

A list of the affected parking lots can be found at Toronto Parking Authority.