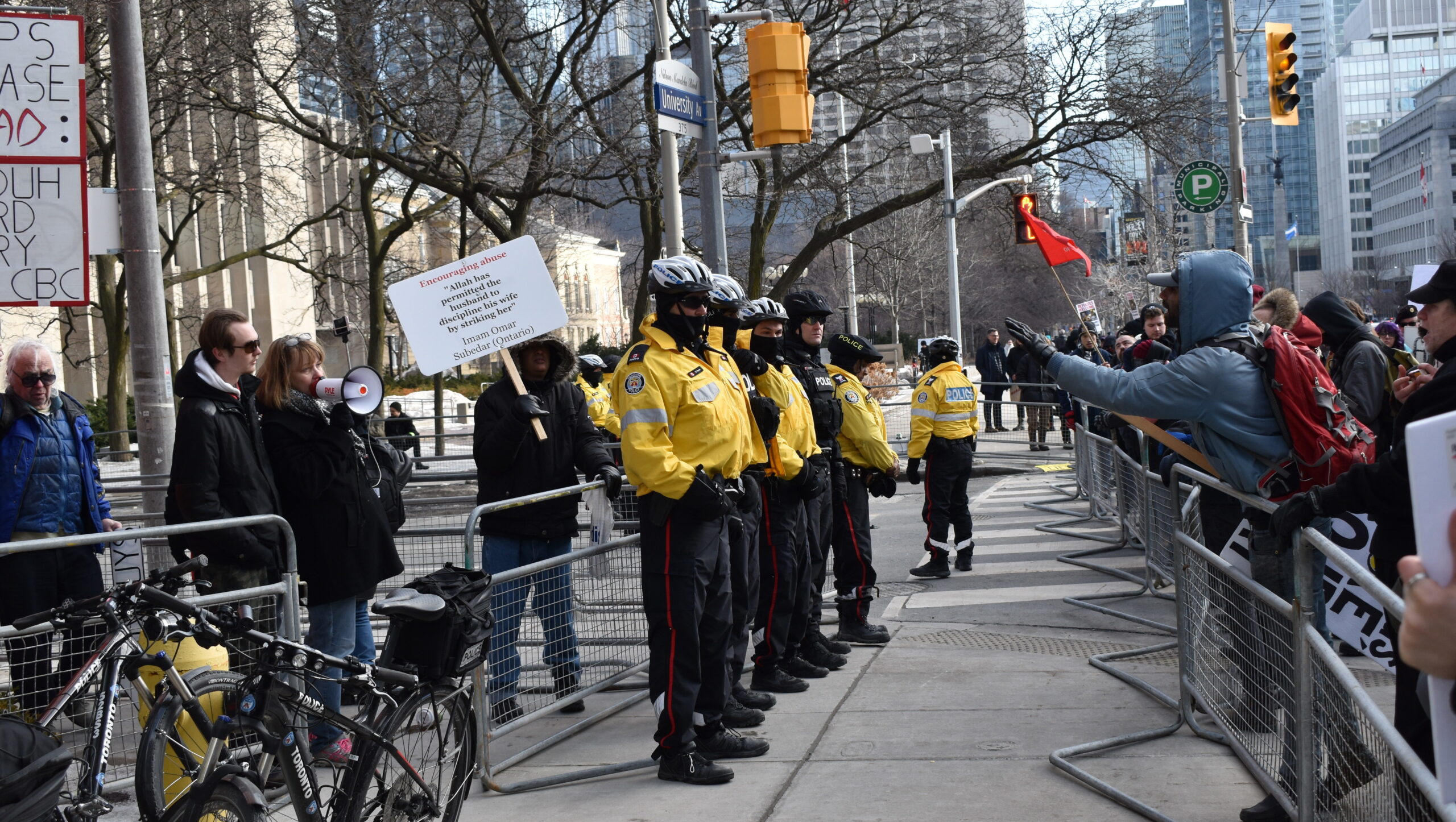 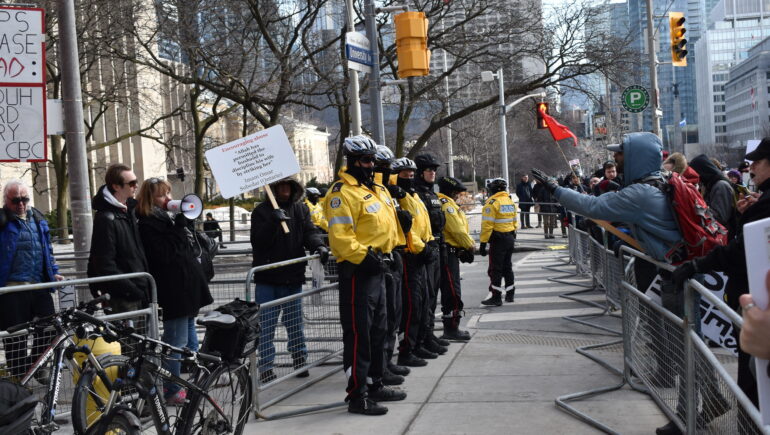 Jenny Hill leader of PEGIDA Canada is shouted down by an unknown counter-protester at 361 University Ave. in Toronto on Feb. 23, 2019. (Ryan Glaysher)

The protesters on University Avenue in Toronto on Feb. 23 were hemmed in on three sides by steel barriers and police officers. Their backs were against a wall spray painted with the words “Racists” with arrows pointing to the spot where they were standing.

Facing the protestors from across the barriers was a much larger group of counter-protestors who sporadically chanted “Fascist sh*theads go home!” and “ANTIFA United will never be defeated.”

Saturday’s protest had been organized by the far-right group PEGIDA Canada and had attracted a scattering of members from more militant groups such as Wolves of Odin and Proud Boys.

Though it was unclear exactly what PEGIDA was protesting on Saturday, the group of around 40 protestors displayed many of the tropes of far-right politics. PEGIDA was launched in Germany in 2014 to oppose what the group saw as the increasing “Islamization” of Europe as the continent took in more refugees from the war-ravaged countries of Syria, Iraq and Afghanistan.

Protestors carried placards denouncing “Jihad” and “Liberals”, while others wore the yellow vests of the populist “Gilets Jaunes” and there was even a lone “Make America Great Again” hat being worn by a woman.

Jenny Hill, the leader of PEGIDA Canada, was a prominent presence at Saturday’s protests often directing with a megaphone the cascades of insults hurled at the counter-protestors.

Hill said PEGIDA Canada “was very concerned about the Islamism in our government and in the Islamic community.” 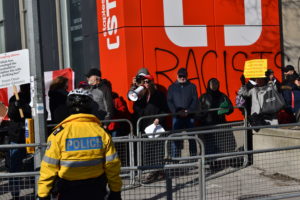 An unknown woman wearing a MAGA hat protesting with the group PEGIDA Canada shouts into a megaphone in Toronto on Feb. 23. (Ryan Glaysher)

Evan Balgord, the Executive Director of the Canadian Anti-Hate network, said PEGIDA has been in Canada since 2015 but was energized both by President Donald Trump’s election win in 2016 and the federal government’s passing of bill M103, a motion to condemn Islamaphobia in 2017.

“They will say they are just against Islam and that they can’t be racist because Muslims aren’t a race and that Islam isn’t a religion but an ideology,” he said.

“However, they tend to use the terms Islam and Muslim to mean the same thing, and sometimes don’t bother at all and are just overtly hateful towards Muslims,” Balgord said.

He said PEGIDA Canada doesn’t have a large presence among the more than 130  hate groups in Canada but does hold frequent, almost monthly demonstrations in Toronto.

The counter-protestors at the PEGIDA rally on Saturday had been organized by Toronto Against Fascism and brought together several left-wing groups.

Many of the counter-protestors had their faces covered with masks and glared skeptically at any unknown persons who approached their side of the steel barrier. 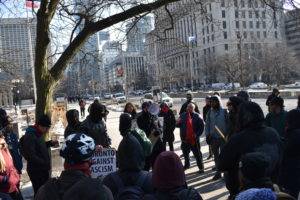 Jacob Zlig, a member of the group Toronto International Workers of the World General Defense Committee, speaks to fellow counter-protesters in Toronto on Feb 23, 2019. (Ryan Glaysher)

One of the counter-protestors, who would only give her name as Hill, from the group Intersectional Anti-Fascists said many wore masks to protect themselves from doxing.

“We are often doxed by the people we protest, and we often get death threats and harassment from them, if they find out where we live or where we work it can be really dangerous, so we wear masks for safety,” Hill said.

After about two hours of hard stares and yelling, PEGIDA was the first to leave with members calling out to each other about which bar they should meet up at on Bay Street.

The counter-protestors lingered a bit longer with many taking group photos of themselves with their pro-immigrant and pro-Muslim banners.

“When hate groups come out on the streets it’s not simply a show of force, it’s also a test to see how the community reacts, and if the community doesn’t react to their overt bigotry it opens the door to increased levels of hate and violence,” he said.

Zlig said if far-right groups are not opposed in large numbers “they will feel emboldened”.

“It’s important to nip this in the bud and not let them have an inch on the street,” Zlig said