Demonstrators marched for ‘Venezuela and its people’ in Toronto 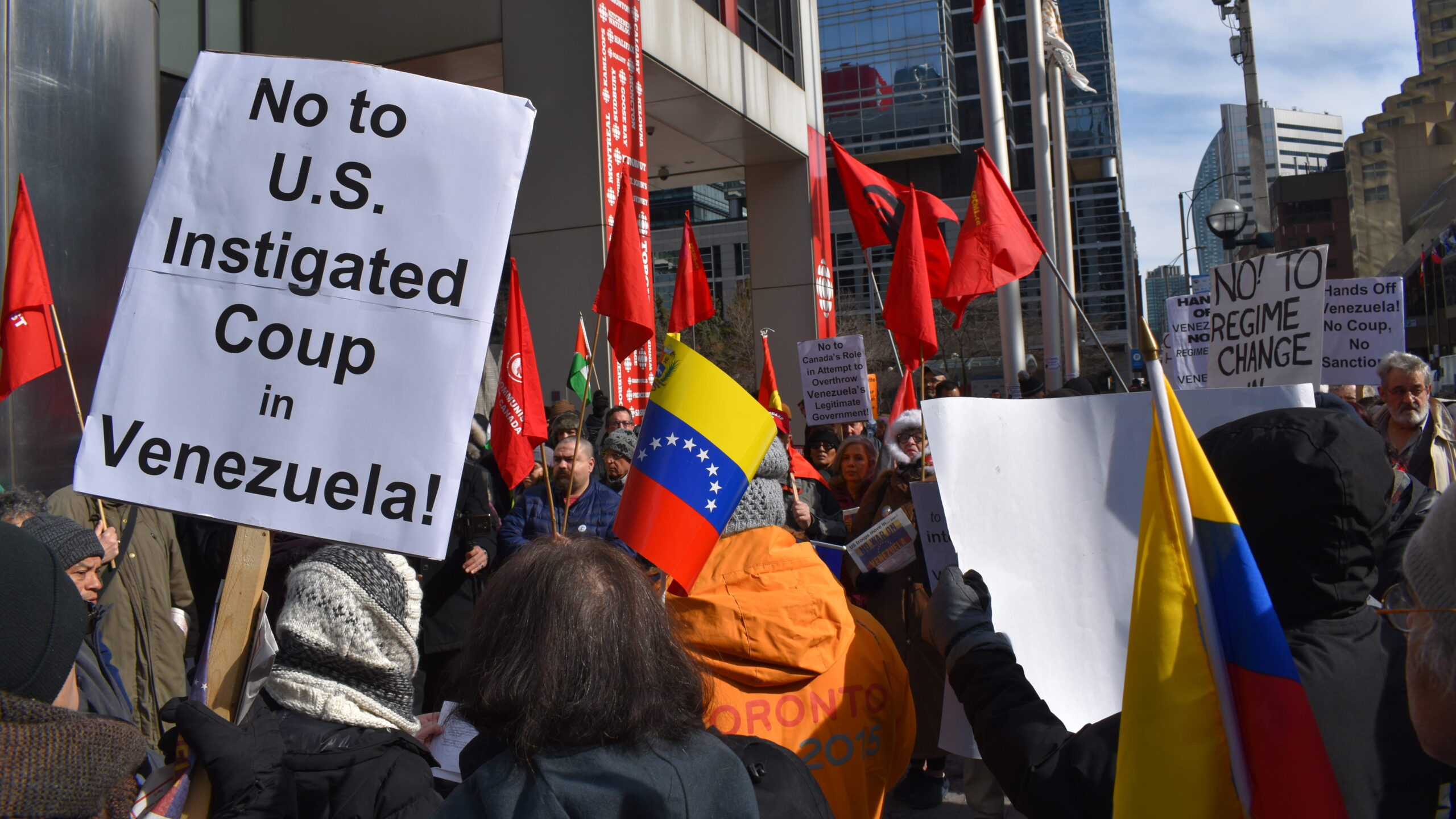 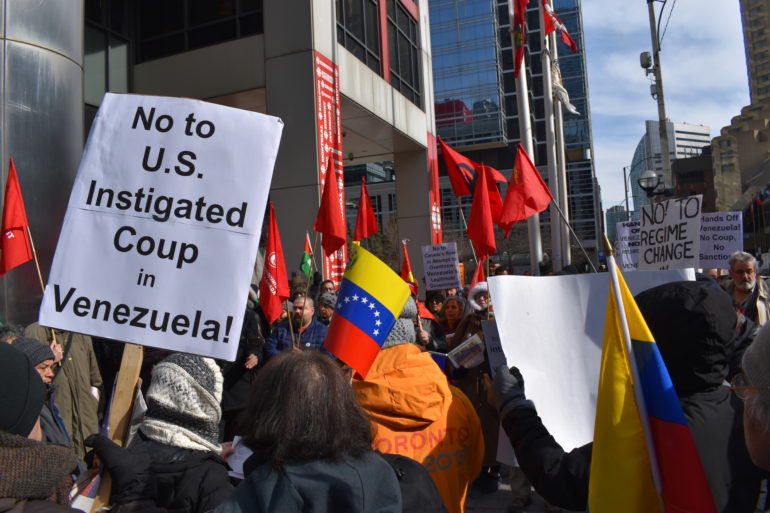 Chants of “U.S. makes endless wars, Venezuela feeds the poor” and “Hands off Venezuela” could be heard ringing across Toronto’s downtown core this past Saturday.

The crowd of more than 100 brandished placards demanding Canada and the U.S. stay out of Venezuela and not to interfere with the current government.

Among the sea of revolutionary red and Venezuelan flags, the crowd heard speakers railing against “U.S. Imperialism” and the “Pinocchio lies of the CBC.”

The protest was organized by the Latin American and Caribbean Solidarity Network in support of the increasingly besieged Venezuelan government of Nicolas Maduro.

The protestors called for an end to all sanctions against the Maduro government and any interventions by the U.S. or Canadian government in the internal political affairs of the South American nation.

“Today’s action is part of a larger action across Canada and across the world in support of Venezuela and its people,” Javier Espinoza, a member of the group Venezuelan Solidarity said in a thundering speech.

He told the protestors why it had been decided that the march should begin outside the doors of the CBC building at 250 Front St. W.

“We chose to protest in front of the CBC because for months the CBC has been a tool of propaganda not only for Canada but also for the U.S.,” Espinoza said. 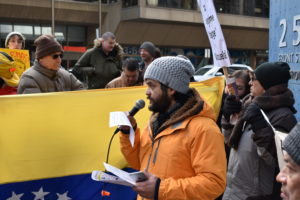 Javier Espinoza a member of the group Venezuela Solidarity gives a fiery speech condemning the “false narrative” of the CBC’s coverage of the crisis in Venezuela outside the national broadcaster’s offices in Toronto, Feb. 23, 2019. (Ryan Glaysher)

“We want to hold them accountable for their lies and their false narrative of what is happening in Venezuela,” he said.

The Maduro government faces increased pressure over the past month as 11 of the 14 members of the Lima Group, including Canada, have recognized opposition leader Juan Guido as the rightful interim Venezuelan president.

All this is happening while Venezuela’s economic crisis seems to be deepening with the IMF predicting inflation could reach 10 million per cent this year.

Mitchell Shore, a member of the group Socialist Action, blamed the Venezuelan crisis primarily on the “U.S. and Canadian economic political war” and accused the CBC of “hiding this truth.”

“The CBC refuses to report that imperialist powers have seized the assets of Venezuela, frozen its credit, stolen over one billion dollars in gold, imposed a trade embargo and that Venezuelan capitalists are hoarding the goods,” Shore said.

“Canada has no right to interfere in the affairs of any sovereign country at all,” he said.

Angry curse words in Spanish were hurled at the protestors by a group of three men who were walking by and the crowd answered with cheers in unison of “Viva Maduro.”

Eventually, the protestors made their way up Bay Street to Nathan Phillips Square, being greeted along the way by the occasional supportive car honk and looks of bewilderment from afternoon strollers. 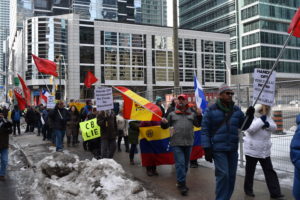 Protestors who support the Venezuelan government of Nicolas Maduro demonstrate on Front Street in Toronto on Feb. 23, 2019 (Ryan Glaysher)

About half an hour after the pro-Maduro protestors left Nathan Phillips Square a much smaller group of about a dozen anti-Maduro demonstrators arrived in the square.

Like the pro-Maduro protestors they carried Venezuelan flags, but none carried red flags or made speeches, but instead relied on one-on-one discussions to persuade people.

One of the anti-Maduro demonstrators was David Vivas, a 28-year-old native of Caracas who said he left Venezuela for Canada when it became too difficult for him to get the insulin needed for treating his type-one diabetes.

Vivas said he had known other people in Venezuela who died because they could not get the insulin needed to treat their own diabetes.

He said he squarely placed the blamed for Venezuela’s crisis on the mismanagement and corruption of the Maduro government.

“The humanitarian crisis has been caused by the negligence and corruption of the Maduro regime,” Vivas said.

“Maduro makes the most corrupt politician in Canada look like a nun,” he said.

Tensions continued to escalate in Venezuela over the weekend when two people were killed by soldiers at the Brazilian border when a U.S. led initiative to bring aid to the country turned sour.