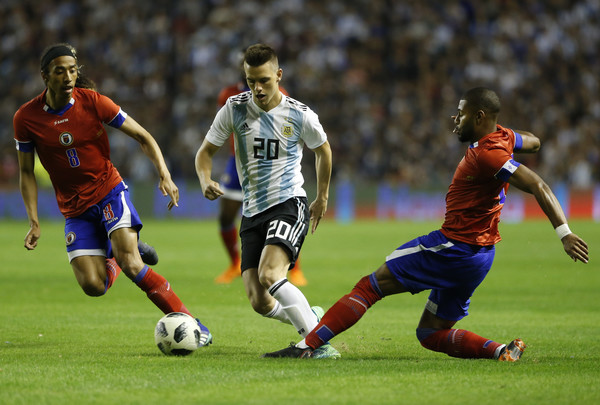 The path to becoming a professional soccer player is difficult for all that attempt to travel it. Mikael “Miki” Cantave, born in Ottawa, knows all about those challenges.

Cantave, 22, made a move to Europe from Canada to start that difficult journey at the age of 12, and now plies his trade in Spain for CD Tropezon and Haiti’s men’s national team.

Before he earned his first cap for Haiti in a friendly match against Argentina and scored in his competitive debut against Nicaragua, Cantave aspired to represent Canada at the international level.

He did represent Canada at the youth level in the 2013 CONCACAF U-17 Championship, which is something that gives him immense pride.

“We had a strong team, and we knew our objective. It was a good experience. An experience that stays with you,” Cantave said in a telephone interview from Spain.

Sean Fleming, Cantave’s head coach at that tournament, remembers Cantave being critical to the team’s success.

“Great kid to coach. Always fit in well with the team and always was a team player,” Fleming said. “One of our most gifted players.

“Against Jamaica, we put him in at half-time, and he was the absolute difference,” he said.

Cantave spurred Team Canada to a 4-2 win after being down 1-2 at halftime against Jamaica in the quarter-finals. Canada finished the tournament in third-place and earned qualification to a much bigger stage, the 2013 FIFA U-17 World Cup in the United Arab Emirates.

He was called up again under Fleming. At the tournament, Canada managed two points and a third-place finish in a tough group with Argentina, Austria and Iran. 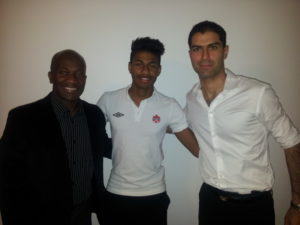 Cantave hoped to have done better at the tournament but future opportunities to achieve success with his country would come, or so he thought.

“After I finished with the U-17 World Cup, I hoped to play for the U-20s and full men’s national team,” he said.

He would not receive another call-up, nor a phone call from Canada from that point forward.

“I always was ready for the call, and I always was prepared, but things happened otherwise,” Cantave said.

Amin Samii, Cantave’s agent since the age of 17, said the mid-fielder represented Canada because “it was so natural.”

“He was born there and grew up there, but he didn’t take it personally,” said Samii, who is based in France.

Cantave said football is a sport full of joys and disappointments.

“You just keep going as an individual,” he said.

Despite the snub from Canada, he continued to hone his skills on the field in France and later in Spain and eventually would get the call to represent his father’s country Haiti.

Cantave said he wasn’t surprised when Haiti took him on.

His connection with Haiti is strong from his father’s side of the family. He felt that familial connection when he attended his first Haitian team camp.

“They took me in as one of their own and treated me like family since the first day. For many different reasons there was a sense of union,” Cantave said.

His father, Pierre, said he was thrilled when he learned his son was going to represent his native country.

“Not just me, my entire family,” he said.

“The news caught like wildfire,” said Pierre, who moved to France from Ottawa permanently to support his son when Cantave was 13. He made a career as a trainer working with professional soccer players.

Pierre was even more pleased because he felt Canadian soccer didn’t give his son a proper chance.

Haiti often looks for players born in other countries who are eligible to play for the Caribbean nation because of parentage. Haiti’s latest squad featured three other Canadian-born soccer players, Jimmy-Shammar Sanon, Jems Geffrard and Josué Duverger, as well as players born in France and the United States.

For Cantave’s first taste of men’s international soccer, he would face off against one of the world’s greatest soccer nations — Argentina. He did not look out of place sharing the pitch at La Bombonera with Angel di Maria, Javier Mascherano and Lionel Messi in May 2018.

Later in November in his first official cap, he started and scored the opening goal 12 minutes into a critical CONCACAF Nations League qualifying match against Nicaragua.

Cantave’s grandmother was visiting his father in France when Cantave made his official international debut.

“She asked me to wake her up at 2 a.m. to watch the game,” Pierre said. “When Miki scored his grandmother was even more ecstatic than me.”

In addition to the goal being his first for Haiti in his first competitive match, it also attained some semblance of revenge for past encounters.

Nicaragua defeated Haiti in March 2017 in a two-legged knockout playoff, which decided which out of the two nations would participate in the 2017 CONCACAF Gold Cup. Haiti won the first leg in Port-au-Prince in commanding fashion scoring three goals but conceding a goal late in the match.

That late goal would prove pivotal to the outcome as Nicaragua won the second leg 3-0 with three Juan Barrera goals in the final 10 minutes ending the tie 4-3 in Nicaragua’s favour.

A year later, however, Cantave helped Haiti get some revenge for the loss.

“It was relieving for me but also for the rest of the players, staff and fans. Everybody in the camp was extremely focused leading up” to the game, Cantave said. “I knew what was at stake.

It’s only the beginning for Cantave as he looks to push on. Since moving to Spain, he feels he has improved as a player.

After his time with FC Nantes and Orvault Sport in France, Cantave moved to Getafe CF in Spain when he was 17 and is now with CD Tropezon in the Spanish fourth division.

“It doesn’t surprise me that he has done well in Spain and persevered. It’s a credit to [Canadian] players that make it in footballing countries,” said Fleming, who is now the assistant coach and Youth Academy Technical Director with FC Edmonton of the new Canadian Premier League.

“Being in Spain for so long, you realize why they dominated for so long. The football here is really delicate and technical,” Cantave said.

It was a deliberate decision for Cantave to stay in Spain and continue to learn and grow even with offers from teams at higher levels.

“It was an investment. Stay humble and improve,” Samii said.

Cantave’s career hasn’t been without its hardships, which is typical for Canadian players trying to make it in Europe. Some players return to North America and the comfort of home or fall off altogether.

“Miki is a very disciplined and determined young man,” his father said. “He doesn’t get discouraged by little bumps in the road.”

“It’s a bumpy ride for sure. But no top footballer traveled a straight line to get to where they are,” Cantave said.

Currently, Haiti and Canada are both in pole position to qualify for the 2019-20 CONCACAF Nations League A and the 2019 CONCACAF Gold Cup. That could mean a matchup against the nation Cantave was born in, grew up in and once represented.