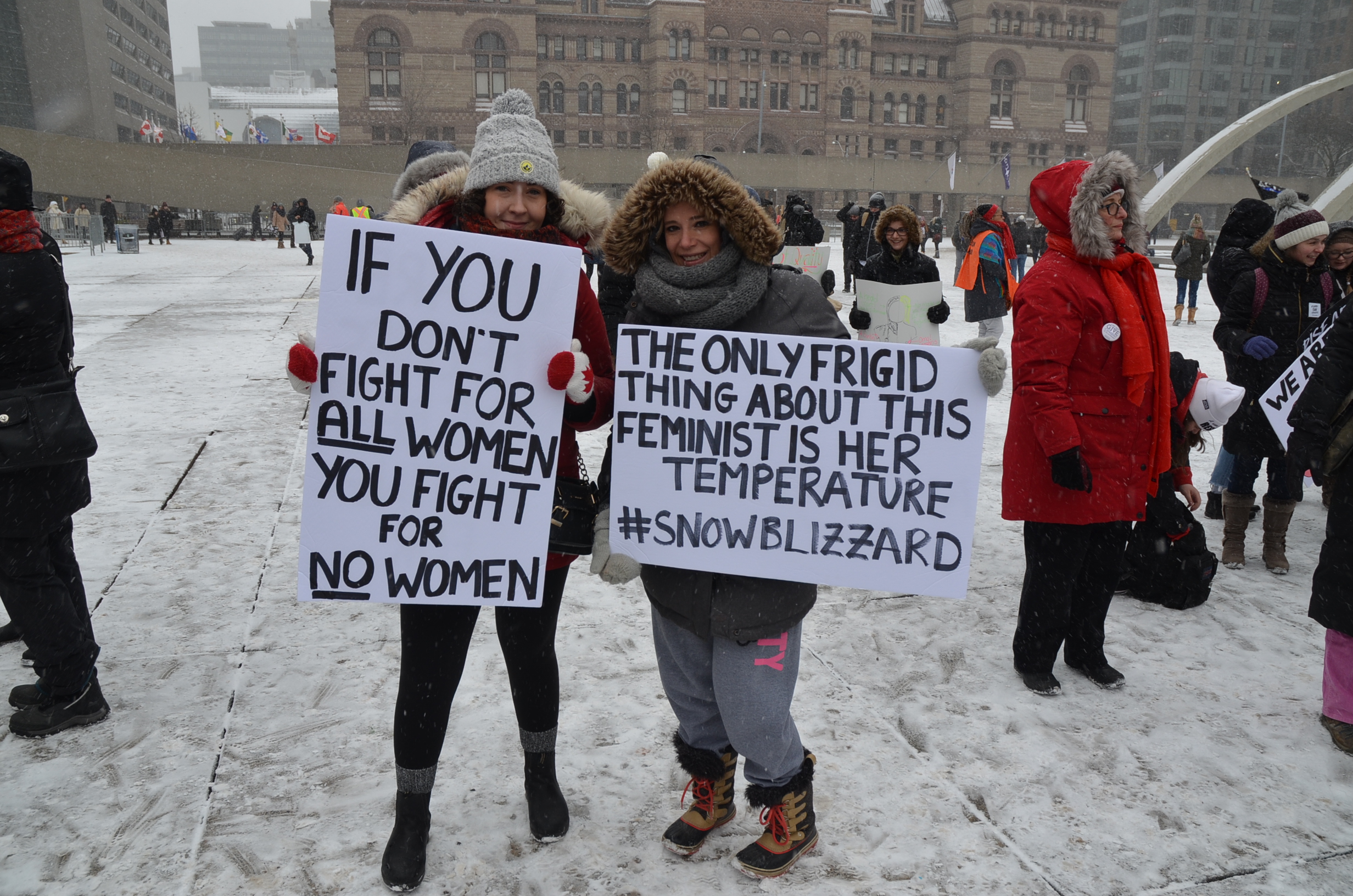 Hundreds of women and their male supporters headed downtown Jan.19 in their parkas and boots, braving the bitterly cold weather to attend the annual Women’s March on Toronto.

The temperature dropped to a frigid -22 C, but protestors brought their homemade signs and their determination, marching from Nathan Phillips Square to Queen’s Park in support of women’s rights.

“I’m here because I firmly believe we’re just getting started,” said April Engelberg, with a coffee in hand and her eyes peeking out from underneath her hat.

Engelberg, a lawyer, ran in the 2018 municipal election as a candidate for Ward 10, coming in second place to incumbent Joe Cressy.

Although she didn’t win, she was encouraged by her results, and by other women in Toronto who also came in second place to male incumbents, she said.

“I will run again,” Engelberg said as she appealed to other women to do the same.

The official slogan of the Toronto march was “we won’t go back,” and organizers took pointed aim at Doug Ford’s provincial government.

On social media they invited people to “join together in marching, resisting and making it clear to policymakers that we will not accept rollbacks and attacks on our communities.”

The rollbacks and attacks referred to various cuts made by the government since the June 2018 election.

Lisa MacLeod, the Minister of Children, Community and Social Services and Minister Responsible for Women’s Issues announced in October the elimination of the Roundtable on Violence Against Women.

The non-partisan expert panel established in 2015 advised policymakers on issues related to or affecting violence against women.

Representatives on the panel also had specific experience with Indigenous women, immigrants, seniors, sex workers, and the LGBTQ+ community. 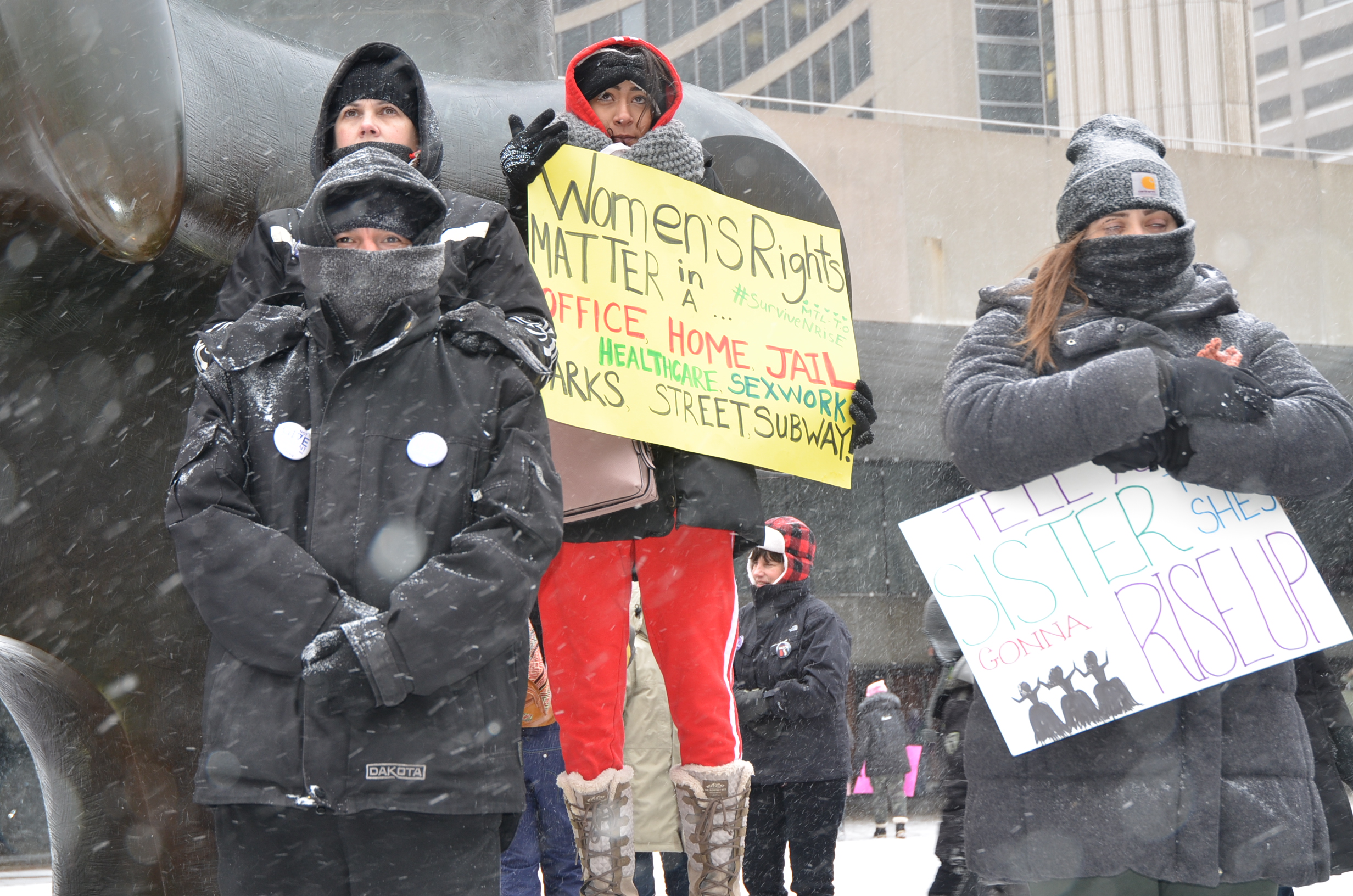 Protestors look cold as they hold their signs and hide under layers of clothing at the Women’s March on Toronto in Nathan Phillips Square on Saturday. (Caitrin Hodson)

The elimination of the roundtable was especially relevant given the international theme of this year’s march was ending violence against women.

“At this point we’ve seen this government cancel the roundtable, which really was a non-partisan sector led representation of leaders across the sector, coming together to come up with innovative solutions to ending gender-based violence,” said Suze Morrison, NDP MPP for Toronto Centre and march attendee.

Morrison, who is the official opposition critic on women’s issues and housing, said cutting the roundtable along with other budget cuts are “targeted attacks on women and are absolutely taking our province backward.”

Prior to the provincial election, rape crisis centres across Ontario were promised increased funding of 33 per cent, she said, receiving funding allocation letters from the government.

The crisis centres expanded staff accordingly, but the funds never arrived, she said, and the Ford government hasn’t given word whether they ever will.

Morrison also cited the retroactive funding cuts to the College of Midwives of Ontario, calling them “a slap in the face.”

But while the cuts were a prominent part of the rhetoric, some marchers attended simply to show their solidarity.

“I’m just here to support my sisters, and when I say sisters, I mean women in general, no matter what background, no matter what ethnicity,” said Rechev Browne. “It’s good for men to come out and support women.”

“It’s important as millennial males to break that stigma of alpha maleness,” he said. 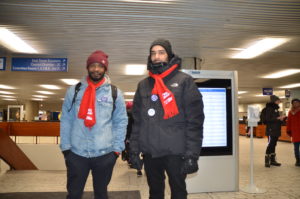 Rechev Browne, left, and Joshua Robichaud warm up inside Toronto City Hall on Saturday at the Women’s March on Toronto. (Caitrin Hodson)

“It’s important for us to be out here to show solidarity with women,” Robichaud said.

Michael Lewis, a 28-year-old human resources professional, attended the march alone after his friends canceled due to the weather.

“I’m gay and I’m black and I feel like I know what it feels like to be oppressed,” Lewis said. “I’m just here to show that I care.” 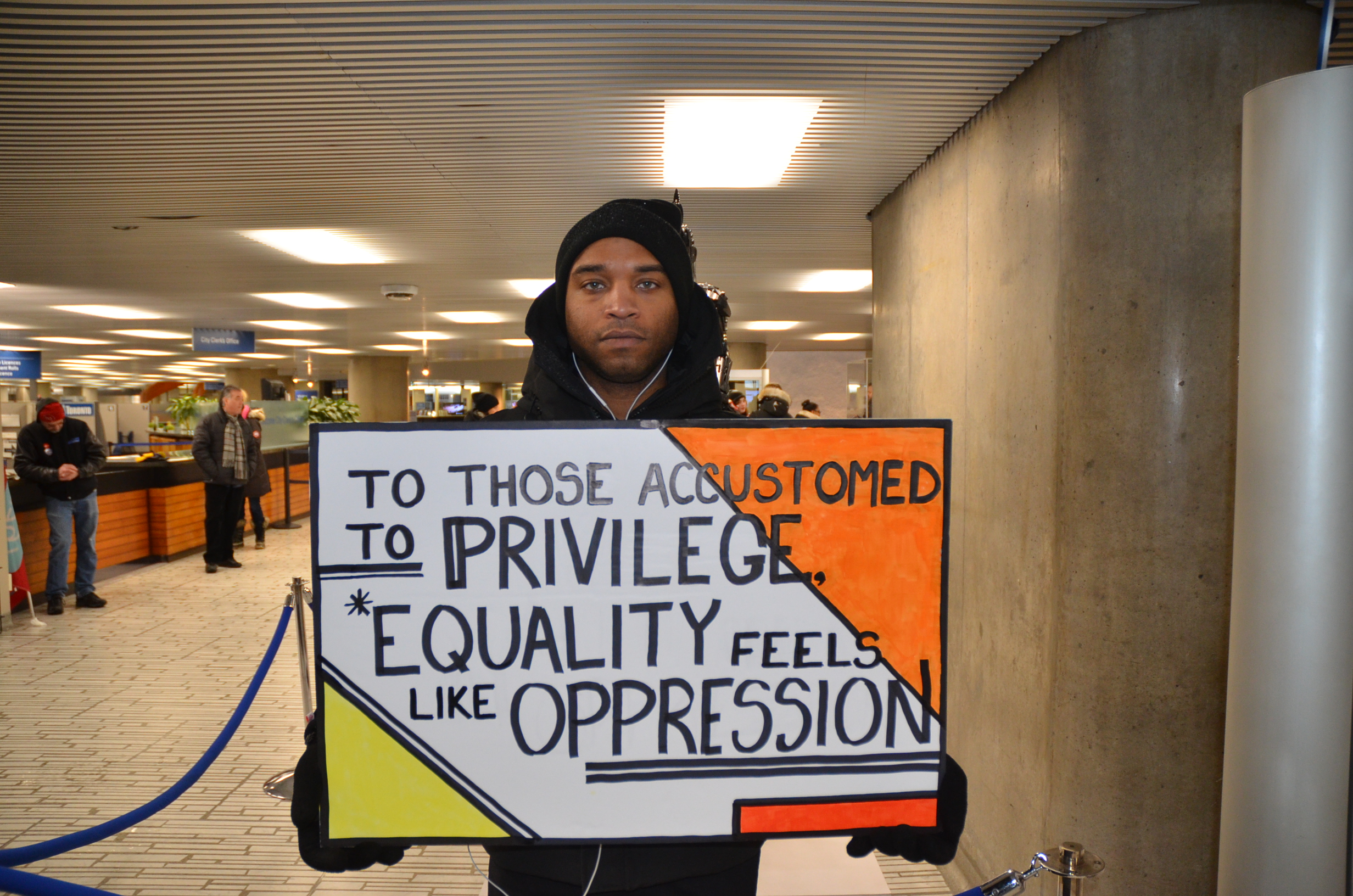 Michael Lewis stands inside Toronto City Hall on Saturday holding the sign he made for the Women’s March on Toronto. (Caitrin Hodson)

Privilege is everywhere, Lewis said, whether it be white privilege, male privilege, or heterosexual privilege.

“I’ve had a lot of questions asking, ‘why are you going to the Women’s March?’” he said.

His response was simple.

“Because I’m a human being,” Lewis said.