VanLieshout said women currently comprise only 37 per cent of the of registered volunteers.

But she hopes to achieve a balanced proportion by the day of the event as a number of roles have yet to be filled.

FIRST robotics competition is an international-level robotics tournament where teams of high school students from all over the world build robots and compete against each other.

The district-level qualifiers will be held at Humber college alongside selections at Ryerson University, UofT and various other institutions.

This is the first time Humber college will be hosting this competition. 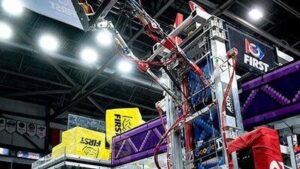 The teams have been given six weeks to build their robots, beginning Jan. 5, after which their robots will be required to perform a set of tasks. Whichever team gets their robot to complete these first, will win.

This year’s theme is Deep Into Space, which will require the teams to have their robots insert cargo into their cargo ship.

Winners of these competitions will qualify for the regional qualifiers and subsequently compete for a place at the World championship, which is expected to be held in the U.S.

VanLieshout said the college aims to change the perception of STEM being a male-dominated field by encouraging more women to participate in and volunteer for the competition.

She said 32 teams would participate in the competition hosted by Humber on March 9 and 10 at the gymnasium. Consequently, the college would need at least 130 volunteers to effectively manage the event, she said.

“Each team would consist of around 10 to 100 members. Along with that, we’ll have seating for about a thousand people. So we need to have a strong management team,” VanLieshout said.

Volunteers are currently needed for roles like robot inspectors, referees, scorekeepers, crowd control and a slew of other responsibilities, she said.

“We don’t need them to have an engineering background for most of these roles. If any training is required, we would provide it to them,” VanLieshout said.

Shaun Ghafari, Associate Dean of the School of Technology and Applied Sciences, said this competition would help Humber College expand its affiliation with more industry partners.

“This would be a great opportunity for us to build our existing network within the industry and help our students with internships and job placements,” Ghafari said.

He said the initial beneficiaries of this partnership would be the volunteers, who would have direct access to the representatives of those companies during the event.

“The volunteers would get to interact with them and increase their contacts in the industry,” Ghafari said.

VanLieshout said the competition would be an opportunity for Humber to promote itself to high school students.

“We will host tours for our participants, work with them to understand what they are best at and suggest the best possible program for them after they graduate from high school,” she said.