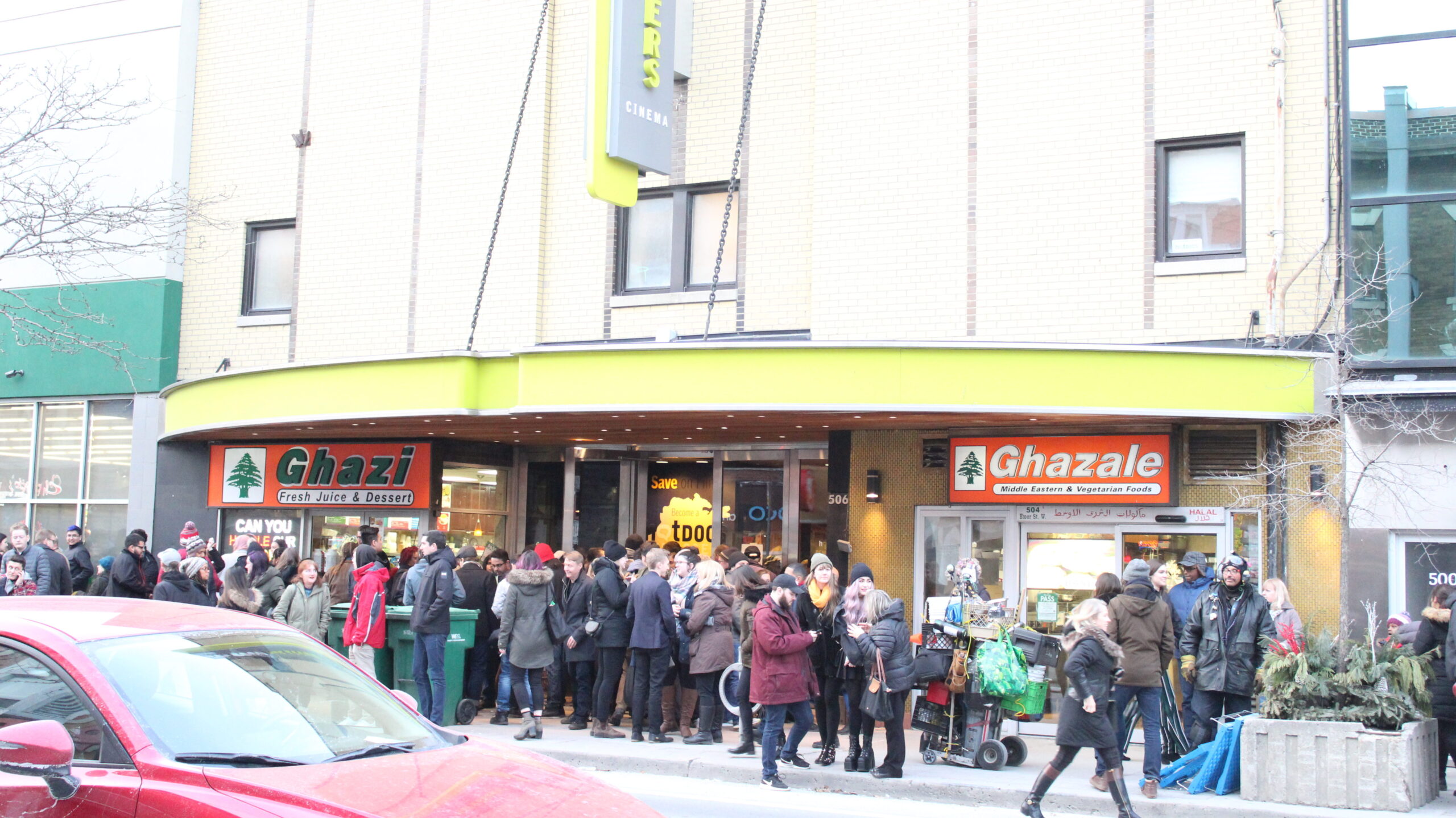 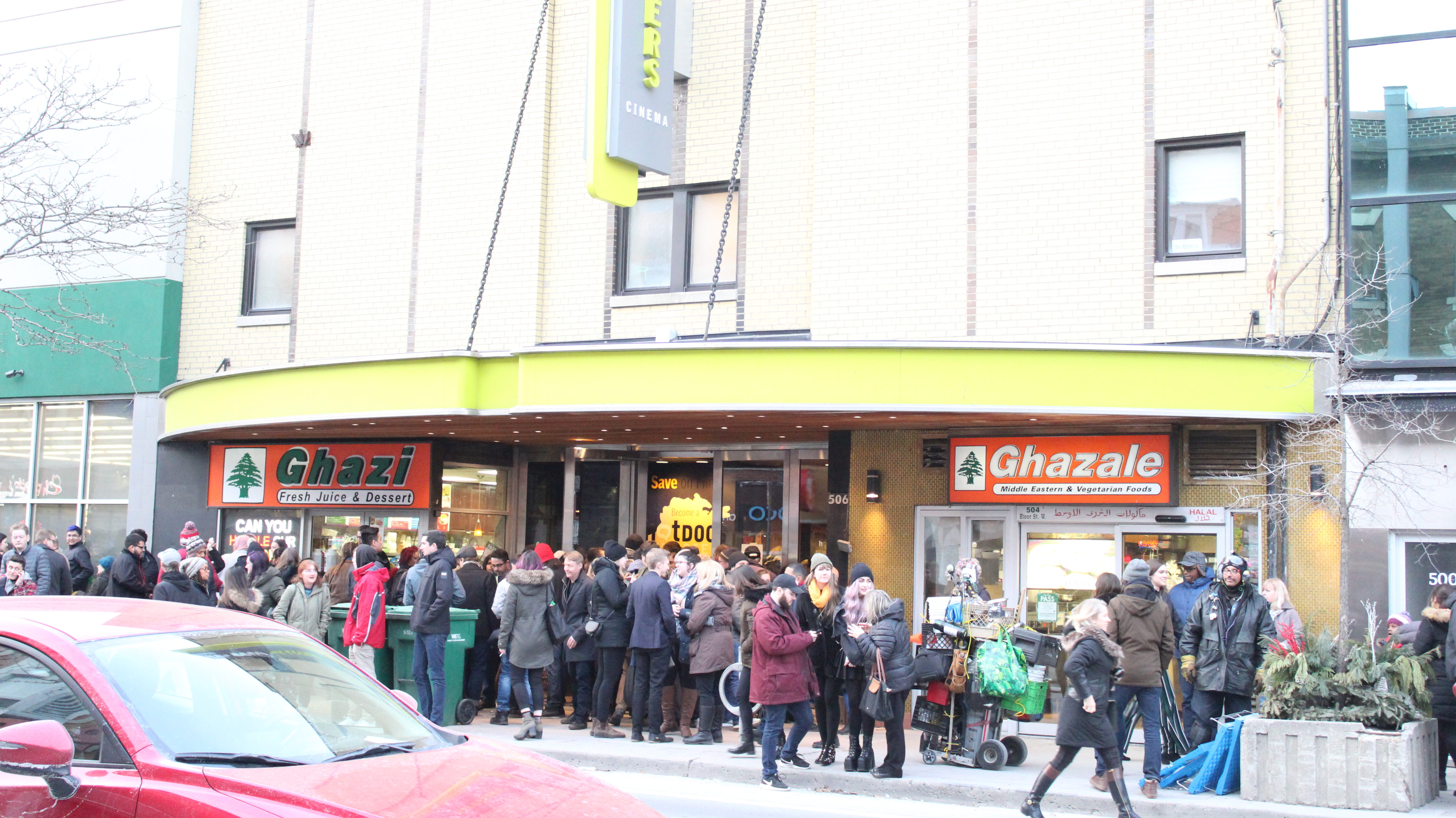 A middle-aged man wearing a pageboy hat shuffled forward, head turned back scanning the rows inside the film theatre.

“Looks like we’re in the front then,” he said.

The lights hadn’t dimmed yet — looking back, the man could scarcely have missed the smiling faces, all backlit by the concessions behind glass.

“This one’s for Sarah,” a woman announces a short distance away while seating three children, leaving a seat empty, while she sits at another spot.

It’s all part of the hustle for good seats in the cavernous century-old theatre as proud students and their friends and family packed the Hot Docs Ted Rogers Cinema on Bloor for Humber Film and Television Production’s 50th presentation of The Documentary Experience on Jan. 12.

The first film, called Metro, was various vignettes of life in transit on TTC subways. The subsequent films as varied as the people convened in the theatre seats: one about Nestlé invading a small Ontario city, another about the contradictions embodied by Instagram figure Phoenix Grey, another called Tight, No Pain about vaginal spasms, another about Teodoro Dragonieri, a Toronto-based theatre-director, educator and mask-maker.

Donna O’Brien-Sokic and Ilana Gutman, professors in the Film and Television Production advanced diploma program, stood in the lobby before the show, greeting the attendees.

Excited second-year students spilled into the theatre for the 2 p.m. showing, their coats still cold to the touch, their loved ones in tow.

But they’d started gathering outside the theatre at 30 minutes earlier as students flagged down friends and family they’d invited, to introduce everyone before the show.

Introductions rose up from tightly-knit groups at the entrance, the sound suspended in clouds puffing out of grinning mouths, along with gasps exhorting the below-freezing temperature.

O’Brien-Sokic and Gutman served as executive producers for the students’ films and played a primary part in organizing this year’s event.

“This project has a 50-year history in this program,” O’Brien-Sokic said.

The Documentary Experience showcases the students’ first short documentary films in the program. 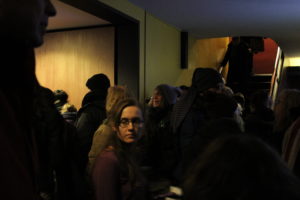 Students and their guests crowded the lobby of the Hot Docs theatre after the annual Documentary Experience, which celebrated its 50th year in the Film and Television Production program. (Alisha Mughal)

Humber’s School of Media Studies is a sponsor of Hot Docs’ Docs for Schools, a program that gives Grade 7 to Grade 12 classrooms access to free documentaries, in school or at the Ted Rogers cinema, near Bathurst Street.

Humber’s sponsorship allows the School of Media Studies the ability to book the cinema for screenings, O’Brien-Sokic said.

“An unbelievable amount of preplanning, imagination, and problem solving” went into the event, Gutman said.

O’Brien-Sokic and Gutman have a template in place for the event, as it’s held every year — but it’s a lot of work notwithstanding, for the students especially, they said.

They go on to pitch their ideas for films at the beginning of their second year — but it’s not a casual affair, O’Brien-Sokic said.

The formal pitching session is “modelled after what happens in the industry,” she said. It’s a session with high stakes in the real world, such as funding and mentorship.

O-Brien-Sokic, Gutman and the program’s other professors work with the students to help them build their filming schedule, conduct research, make contacts for subjects and secure filming permits for locations, O’Brien-Sokic said.

Preproduction lasts four weeks, and then the students have four days to film. Then begins post-production, she said.

The intense working schedule is worth the professional experience the program allows students, and because many of the films produced in the advanced diploma program are recognized in the real world.

A film produced in the program called The Land of Nod was screened at TIFF’s annual Canada’s Top Ten Film Festival in 2017, the program’s website said.

Students also create a marketing strategy surrounding their film to promote it and themselves, O’Brien-Sokic said.

Humber’s program is distinct from the more academic programs at Canadian universities, which tend to be more theory based, Gutman said.

“That’s what makes Humber special,” O’Brien-Sokic said, adding the program is very hands-on and prepares students for the strenuousness of making movies in the real world.

A roar of applause erupted after each film, inevitably as the credits rolled.

Looking around the theatre at the faces staring up at the “best screen,” as O’Brien-Sokic called it, with the “best sound,” many of the faces on the big screen could be seen among the audience.

Everyone had been invited.

“Our projects are well-oiled machines,” O’Brien-Sokic said. “Why it’s lasted is because it’s an incredible learning experience, and what the students are able to take from that training and learning they get in all their classes and produce is quite phenomenal, and you’ll see that on the screen today.”