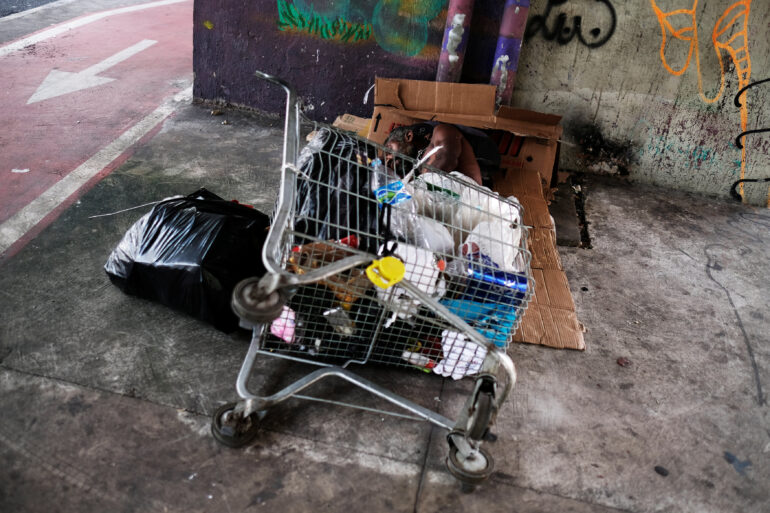 Advocate group calls for the city to call homelessness as a state of emergency. REUTERS/Nacho Doce

A new coalition led by downtown councilor Kristyn Wong-Tam called for city council to label homelessness in Toronto a state of emergency, on Jan. 22.

This coalition came about in light of the deaths of four homeless persons, and recent hidden-camera footage of conditions in a 24-hour respite centre.

“It is untenable,” Wong-Tam said in the press conference, describing the current housing situation. “We have people living under the Gardiner, living in ravines, living in the parks.”

In Canada, housing and shelter is not a guarantee, and while the coalition acknowledged this, it called for all three levels of government to address this issue.

The shortage of affordable housing comes from the high rental rates and 6,500 units being listed on the home sharing app, AirBnB, which is a contradiction to the city’s short-term rental regulation, currently under appeal.

The increasingly costly rental market has also led to a spike in “personal use” evictions, where landlords claim to use the property for personal use but put it back up on the market at an increased rate.

“It’s the fact that we still don’t have a national housing program … we haven’t had one since 1993,” said Cathy Crowe, a member of the coalition.

The Trudeau government has put together a new housing spending plan in July 2017, but Crowe said nothing much has been made of it.

There are still people on wait lists for an affordable home, and shelters are at capacity all over the city.

This tells the story of the original 90% council ruling on capacity. ‘Toronto’s Shelters Are Now Consistently Above 90% Capacity – And That Is Extremely Dangerous’ (https://t.co/zqCTLS1d1s)

According to the Toronto Street Needs Assessment, a survey on homelessness, one significant reason people are homeless is that of migration or inability to pay rent or a mortgage, which is a testament to what Crowe and Wong-Tam have said.

Crowe said often rooming houses and affordable homes get turned into more expensive homes, and landlords can make renovations to increase rent, leading to evictions and people in a state of limbo.

“Everywhere you see condos going up, often what they’re replacing is a rooming house,” She said.

Hania Ahmed, a representative of Homesfirst, a homeless shelter, said that lack of affordable housing is a contributing factor to the rise in homelessness.

“Affordable housing is defined as defined as 80 per cent of market value, which is still too much for many,” she said.

The planning and housing committee will bring this issue up at the city council meeting on Jan. 30, and an affordable housing initiative is also on the agenda.