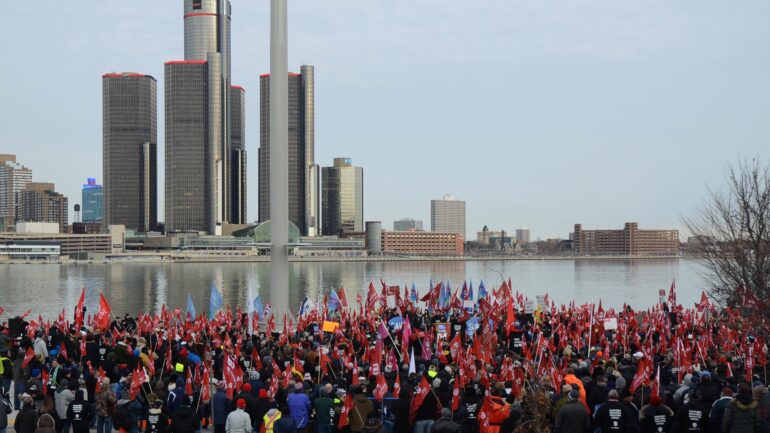 People chant at a Jan. 11 rally as Unifor launches its campaign in Dieppe Park in Windsor. (Alireza Naraghi)

Strong, squalling winds buffeted the border city of Windsor, as hundreds of workers gathered for a General Motors rally along the Detroit River. Many were still processing the grim news: the auto giant will close the Oshawa operation, along with four other U.S. plants.

By next year, one of Oshawa’s primary employers will be no more.

Ever since the American company’s vast assembly plant opened in 1953, it has dominated every aspect of life in this community about 60 kilometers east of Toronto. Now, GM Canada workers are fuming the automaker plans to idle — and with about 2,600 jobs on the line — the dire consequences were still sinking in.

“My father and my grandfather worked there. My husband worked there. I’ve just recently lost my husband,” said Barb Pomery, a third-generation GM employee. “If I lose my job, how am I going to support myself?

“How am I going to keep my house?” Pomery asked.

The automotive industry is an integral part of Oshawa’s history, where production began in the city more than a century ago. At one point, the facility was the largest car manufacturer in the world, turning out vehicles for the North American market and beyond.

“It’ll be devastating to Oshawa,” said Doug Lyon, who’s been with GM for 30 years. “I don’t think it’ll be as devastating as it would have been years ago, when 20,000 plus people were working in Oshawa for General Motors, but it will still hurt, for sure, because there’s still a lot of feeder plants in Oshawa and small businesses that count on it.

Part of what’s driving this, according to GM, is a broad restructuring strategy in the fast-changing industry, which is now shifting its investment on electric and autonomous cars of the future.

But following the announcement, plant workers were puzzled as to how a facility that has received numerous awards — and is considered by GM to be one of the most efficient in productivity — could be permanently closed.

“I believe we’re number two in cost production per vehicle in the corporation,” said Tom Fowler, an electrician who has worked at the Oshawa plant for 38 years.

“Our quality matrix is off the charts,” he said. “Every expectation they put in front of us, we exceeded. Why can’t we build the electric cars here? I just don’t get it.”

One factor stoking the workers’ rage is that GM’s move came after Canadian taxpayers rescued the company from virtual bankruptcy with a massive $13.7 billion bailout during the 2009 recession. One of the day’s more colourful signs, a banner around six feet tall, featured CEO Merry Berra, laughing above the words, ”Thanks for the Bailout Money.” Several GM workers posed for pictures in front of the sign shouting, “Pure greed.”

“I mean, this woman does not deserve $22 million a year,” Pomery said as she points at the GM high-rise office across the river. “Nobody deserves that. I don’t care who it is.”

Meanwhile, Canada’s young people are already trapped in the precarious job market — and the ascendance of the gig economy has left them with the prospect of being the first generation to be worse off than their parents.

“For me, it’s a little different, because I am pension-eligible, and I have a skilled trade, so yes, there is some work out there for skilled trades,” Lyon said. “But we have a lot of young people, I would say between 23 and 35 years old — and a lot of them will be in such a financial crisis.

“It’s going to be incumbent upon the government to help them,” he said.

Another reason for the seething anger is the federal and provincial governments’ “shocking” inaction. While many blamed Prime Minister Justin Trudeau’s policies, or at least his indecision, it’s Ontario Premier Doug Ford that workers hold responsible.

“They’ve been silent so far,” Fowler said. “Everybody knows the comment that Doug Ford about the ship has sailed, it’s too late, and Justin Trudeau, his silence is deafening.”

He feels the promise of a better economy with well-paying jobs was just a hollow campaign promise. 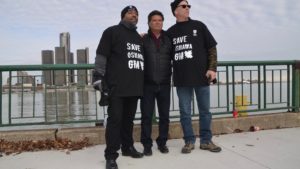 Jerry Dias, national president of Unifor, which organized the protest, is incensed.

“I can’t understand why they are so silent,” the union leader said. “Doug Ford came out right after that and said, ‘Look, this ship has sailed.’

“But, you know what, you sit back and you reflect sometimes — and you go, ‘You know what? Maybe that wasn’t the brightest of strategies or the smartest of statements,” Dias said.

Pomery said the governments have not yet helped the affected workers.

“Doug Ford is not for the people, he’s for the rich,” she said. “He’s not for the everyday people. I am embarrassed now to say I voted for him.”

While the plant workers feel betrayed, they are also filled with hope. They’re proud of their work and the sense of solidarity among their ranks.

“I have one Oshawa-built Equinox and two large town Chevy Cruisers in my driveway, and if they shutter our plant, I will never buy GM cars again,” Fowler said. “The morale might be a bit low right now, but we won’t give up. I don’t think anybody is ready to give up.

“This is more than just a job, it’s about the future of our kids and our community,” he said.