Global Game Jam 2019 at Humber the biggest yet 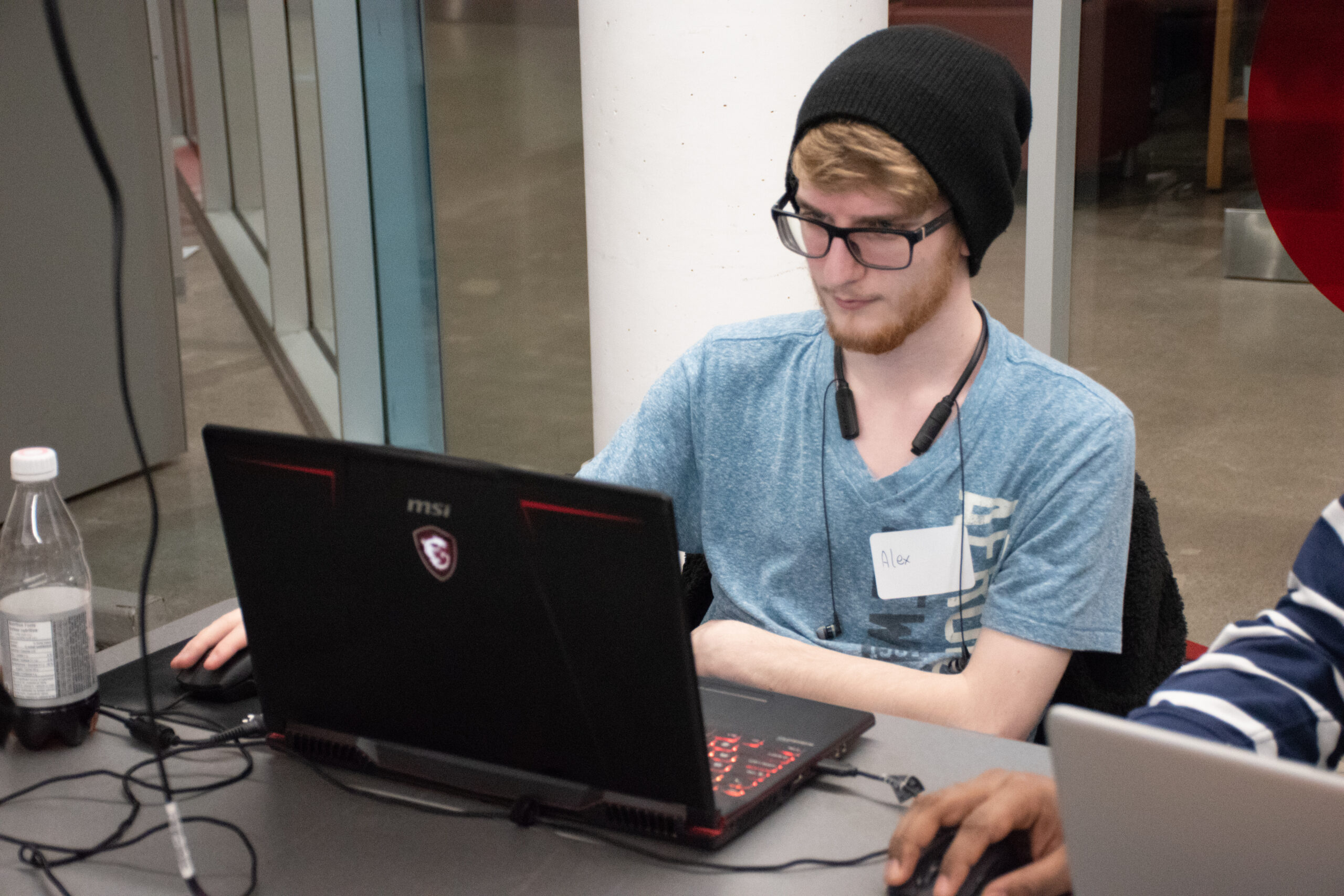 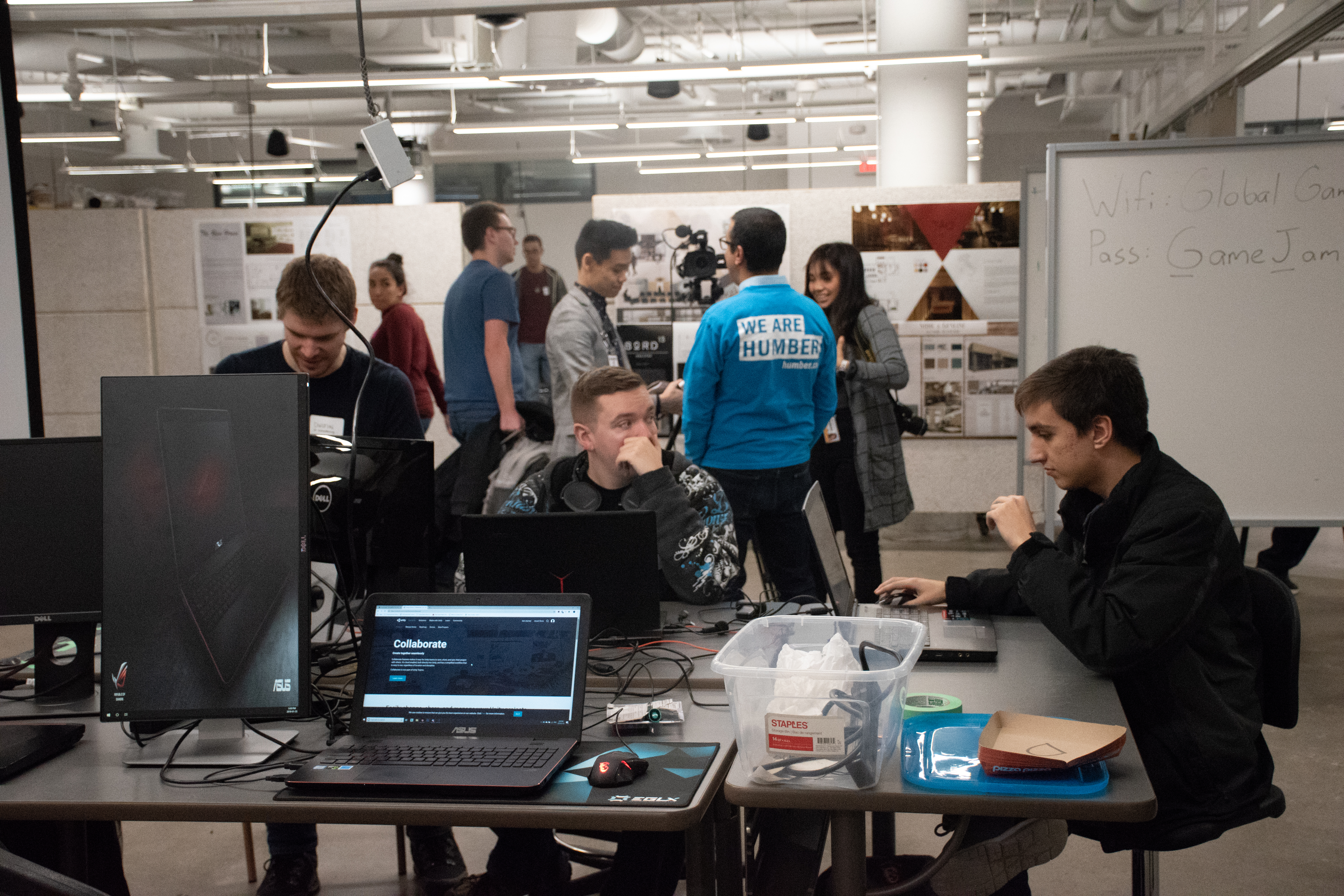 Humber College North campus room N103 moments before Global Game Jam was about to start. The students were waiting for the theme to be announced. (Rodrigo Diaz Maingon)

Eric Mazza was making a big effort just by keeping his eyes open.

The Global Game Jam 2019 was minutes away from reaching its end and most participants had already uploaded their projects.

One of the members had put two chairs together and laid on them in order to try and get some sleep.

Umer Noor, a psychics professor at Humber and program coordinator and organizer for this year’s jam, said while some other students spent all 48 hours in the N Building rooms designed their games, this was not encouraged.

“We recommend: go home, sleep, come back the next day refreshed. You don’t have to code 48 hours straight,” Noor said. 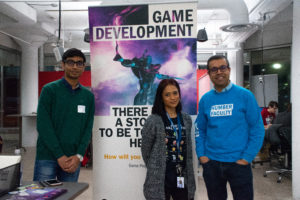 The Global Game Jam is a worldwide event that takes place at the same time in many different countries. The objective of it is to create a game in only 48 hours based on a random theme given to the participants.

Other colleges in Toronto, including Sheridan College and George Brown College, also played host to the event.

He said this kind of event is exactly what employers are looking for when they check a resume from a potential employee, making this really good portfolio material.

The sponsored event wasn’t a competition but there were prizes to be won courtesy of Ubisoft Toronto, Unreal, GitHub and Unity, to name a few.

Lendon Grant, a game programming student at Humber, has participated in previous game jams before. 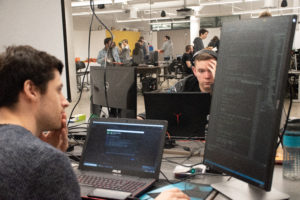 Lendon Grant (left) and Tyler Betts-O’Donnell (right) in the early stages of coding their game at the Global Game Jam 2019 at Humber College. (Rodrigo Diaz Maingon).

“Last year’s theme was ‘transmission.’ We ended doing a car game in which you can control the transmission of the car and you can eject it out of the car and put it on another car to serve a different purpose, kind of like a puzzle game,” Grant said.

This year he and his team designed “SlimeCraft”, a two-player co-op game where two slimes travel around a barren world in order to build themselves a new home

Mazza’s team game was titled “Memories” and it’s a narrative puzzle-driven game based on the memories of a dying man. 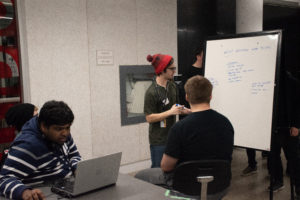 Eric Mazza writing on the board brainstorming with his team members: Sujan Sooriyakumar (left) and Christopher Mayor (right) after the theme has been revealed to the participants at the Global Game Jam 2019 at Humber College. (Rodrigo Diaz Maingon).

“We brainstormed a couple different ideas, but part of the idea of the game jam is that you got to be quick with everything so you cannot spend too much time in the processing phase so we just basically picked an idea and went with it,” he said.

Video games usually take years to create and develop. By creating a game in just 48 hours a certain lack of refinement has to be expected.

Mazza said he was somewhat disappointed with the game he and his team created and that he regretted that they tried to make the game too complex and big resulting in an unpolished product.

While the Global Game Jam mainly attracts game programmers, artists, audio and even voice-over actors are all welcome.

“I would say you could come with no knowledge at all, just be interested in coming up with a game idea,” Noor said.

Nghia Tran, a video game programming student at Humber who has participated in three Global Game Jams, thinks of this event as a very useful way in which he can become a better programmer.

“It’s a way to challenge yourself and change who you are as a programmer and developer, it allows you to keep up to pace in the gaming industry and keep your skills very high,” he said.

All the games created by the Humber North campus students can be found at the event’s website.