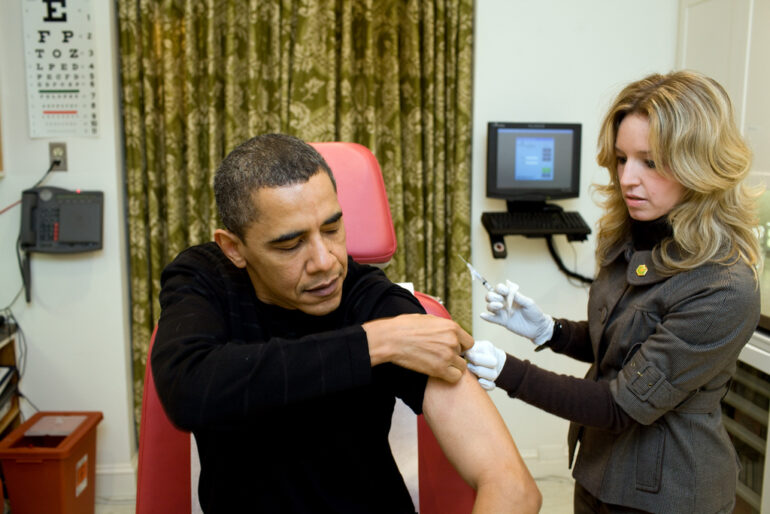 A White House nurse prepares to administer the H1N1 vaccine to President Barack Obama at the White House in 2009. (White House/Pete Souza)

Flu season is well underway and will continue until March, and the current vaccine seems to be a good genetic match for the virus, according to a spokesperson for Toronto Public Health.

It’s never too late in the season to get vaccinated, and health officials are still encouraging everyone to take advantage of the shot, said Dr. Vinita Dubey, a spokesperson for TPH.

Vaccination rates in Toronto have stayed steady for the most part in past years, but influenza cases are higher this season than the previous five-year average, Dubey said.

TPH has vaccinated nearly 7,000 people in community clinics so far this flu season. Additionally, pharmacies, doctors and health care providers have given the flu shot to one million city residents, Dubey said.

Those skeptical of the effectiveness of the flu shot would be disappointed to hear the vaccine was only 17 per cent effective last season against the dominant strain, according to a study done by the Canadian Sentinel Practitioner Surveillance Network.

The flu shot isn’t perfect, but getting vaccinated decreases the risk of a healthy person developing the flu — or worse — passing it onto someone more vulnerable to the illness, according to Dr. Bryna Warshawsky, a medical director with Public Health Ontario. 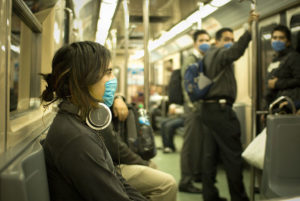 People in Mexico City wear masks on a train due to the swine flu outbreak throughout the surrounding region in 2009. (Wikimedia Commons/Eneas De Troya)

“Don’t forget that even seasonal influenza kills 2,000 to 3,000 people each year in Canada and they are usually the very young and the very old,” said Dr. Tim Sly, a professor at Ryerson University’s School of Occupational and Public Health.

People whose lives may be at risk from contracting the influenza virus include children under five, the elderly over 65, pregnant women, and anyone with serious medical conditions including pneumonia and heart disease.

Flu shots in Ontario protect against four separate strains, two A’s and two B’s. The A strains are known to emerge first in the influenza season, with the B strains appearing later in February or March, Dubey said.

New flu vaccines are developed each year specifically for different countries to combat the strains circulating at the time.

The World Health Organization recommends the strains — both A and B — that should be included in each vaccine, based on predictions collected year-round from influenza experts.

The main strain circulating and being vaccinated against this season is A/H1N1, a significantly less dangerous variant of the strain that caused the swine flu pandemic in 2009, Sly said.

Most people have no immunity to the unfamiliar strain and as a result, there is no immediate vaccination, Warshawsky said.

“Viruses are constantly mutating and can change their lethality,” Sly said.

Once people develop an immunity to a strain, it can become a recurring seasonal virus, such as the 2009 strain of H1N1, he said.

When a new strain initially emerges and infects a population, the outcome is often extremely deadly — the worst influenza pandemic occurred in 1918.

The disaster, known as the Spanish flu, spread across the world after the end of the First World War and was dubbed the “Mother of All Pandemics” by public health researchers Jeffery Taubenberger and David Morens.

Dr. Kandace Bogaert, a history professor at Wilfrid Laurier University, said about 50,000 Canadians died from influenza on the home front in just a few months in 1918, “almost the same number as Canadian soldiers who had died fighting in four years during one of the deadliest conflicts in human history.” 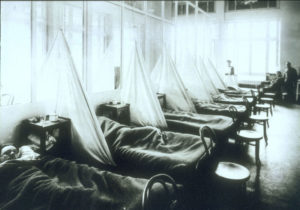 Victims of the Spanish flu at U.S. Army Camp Hospital No. 45 in Aix-Les-Bains, France in 1918. (Wikimedia Commons)

It was the first known outbreak of the H1N1 virus, which has since morphed and evolved over time into the current influenza A strain circulating today, Bogaert said.

The Spanish flu also revealed major weaknesses in Canada’s public health infrastructure, especially the practice of quarantine, and eventually led to the creation of a federal health department, she said.

In 1919, Dr. John G. FitzGerald of Connaught Antitoxin Labs of University of Toronto began developing “a vaccine that was widely distributed” for free across Canada and the U.S. in response to the pandemic, Bogaert said.

“The influenza virus wasn’t identified until after the pandemic, in 1931,” which is when scientists began to develop the first official flu shot, she said.

It is unclear what effect, if any, the Toronto-conceived vaccine had at the time of distribution.

“However, the development of this early vaccine in Toronto is kind of an amazing, often forgotten part of the pandemic in Canada,” Bogaert said.